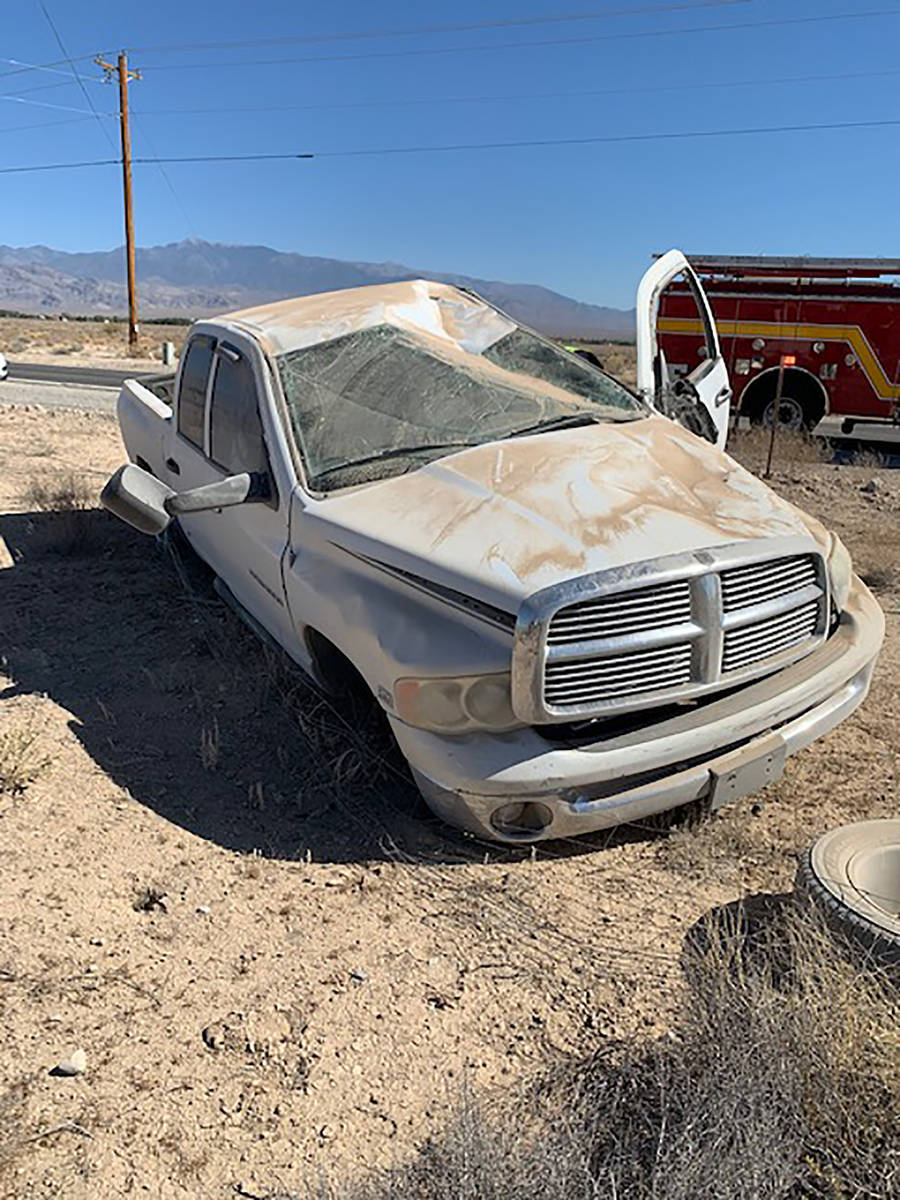 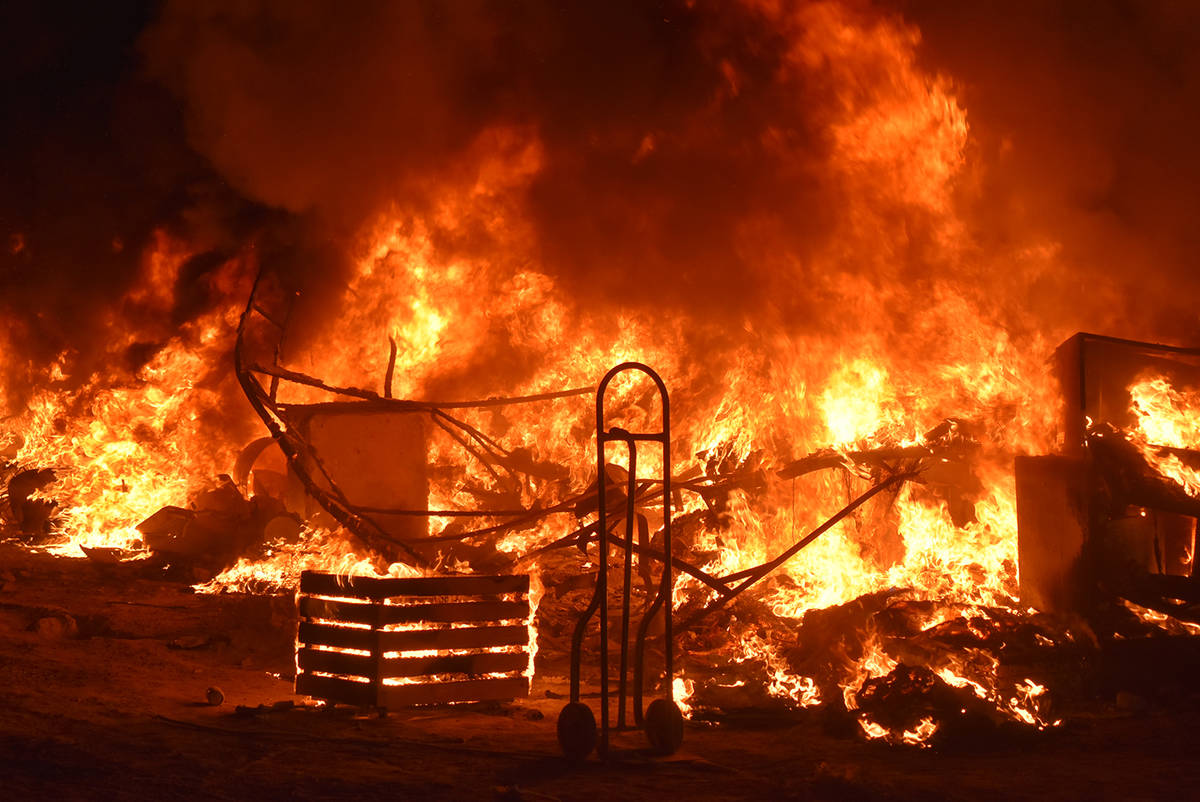 Special to the Pahrump Valley Times A motorhome that was converted into a fixed-use property was destroyed by fire along the 4800 block of East Paiute on Oct. 5, at approximately 11 p.m. Though no injuries were reported, the cause of the fire was deemed suspicious. 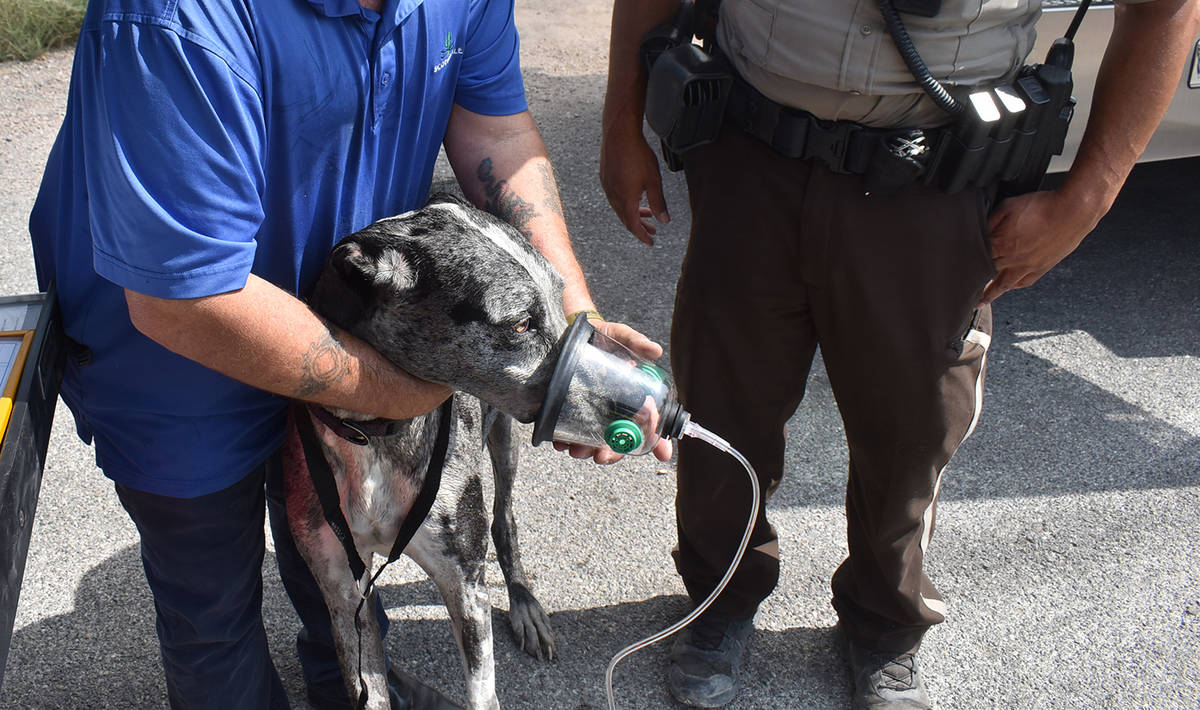 Special to the Pahrump Valley Times Pahrump fire crews rescued two dogs and a cat following a structure fire along the 3900 block of Tehachapi Avenue at approximately 12:15 p.m., on Sunday, Sept. 27. All of the pets were administered oxygen and transported to a local animal hospital by private vehicle.

Fire crews housed at Pahrump Valley Fire and Rescue Services Station-3 immediately jumped into action after a frantic knock on the door alerting them of a nearby rollover crash along Homestead Road at approximately 11:30 a.m., on Monday, Oct. 12, according to Fire Chief Scott Lewis.

Station-3 is located a short distance off of Homestead Road.

“Our Station-3 crew was in house where they were informed of a one-vehicle rollover located south on Homestead Road,” Lewis said. “The crew immediately reported the incident to dispatch. Station-1 added an engine company to the assignment, where Medic-3 arrived to find a one-vehicle rollover, with the vehicle off of the roadway. There was no entrapment, however there were two patients who required a medical assessment and were subsequently transported to the local hospital. The nature of the accident is under investigation.”

On Monday, Oct. 5, fire crews were dispatched for a reported unknown type of fire along the 4800 block of East Paiute Boulevard at approximately 11 p.m.

“As crews were responding, we were notified with an updated report suggesting that it was a well-involved trailer fire, with possibly two or three trailers involved, located in what they thought was an RV park,” Lewis said. They noticed a large orange glow in the sky with heavy smoke showing. Crews arrived on location and found what had been a motorhome that was converted into a fixed-use property. It appeared that it was a vacant unoccupied dwelling.”

Lewis also noted that the fire had extended to an overabundance of personal property in a small utility trailer on the property.

“The other closely located trailers on the property were protected,” Lewis said. “It appeared that maybe one, if not two were used as a fixed residence, as well as a two-story dwelling. None of the other trailers on the property were impacted by the fire. Crews commenced a defensive exterior attack and quickly controlled the fire with no extension. Valley Electric Association crews responded and assessed some of their equipment, which was in close proximity to the fire. The cause of the fire is thought to be suspect in nature, and remains under investigation.”

On Sunday, Sept. 27, fire crews were dispatched for a report of a structure fire along the 3900 block of Tehachapi Avenue at approximately 12:15 p.m.

“As crews were responding, they observed a large developing black-colored smoke column in the area of the reported fire,” Lewis said. “As they arrived, they found heavy fire across the back of the structure, which was a double-wide manufactured dwelling, with closely placed accessory outbuildings on both the front and rear, as well as a fifth-wheel trailer backed up to a rear side of the structure, which were all immediate exposures.”

Lewis also said that there were heavy fire conditions across the rear of the home, where fire was showing through the roof.

He also noted that the home was secured with a metal front door.

“As one crew commenced a defensive exterior attack, knocking down the main body of fire, a second crew entered through the front door, as the status of the occupants was unknown,” he said. “They forced both doors open and made entry and found zero visibility, high heat, and very dark colored smoke throughout the interior. They completed a primary search while advancing a hand line into the structure. They did not find any persons in the house.”

Lewis went on to say that crews commenced an interior attack by pulling the ceiling material down, and quickly exposed the fire which was running along the attic space.

“The bulk of the fire was knocked down in short fashion,” he noted. “The homeowners were not at the house the time of the fire, but they arrived within a short fashion afterwards. They informed us that there were three pets inside which consisted of two dogs and a cat. Crews immediately went back inside to search for those pets. They found one of the larger dogs hiding behind a big couch against the wall. Both that dog, a chihuahua and a black cat were all successfully rescued, administered oxygen and transported from the scene by private vehicle to their local veterinarian. There were no injuries and the fire is thought to be accidental in nature, originating on the rear porch of the structure.”