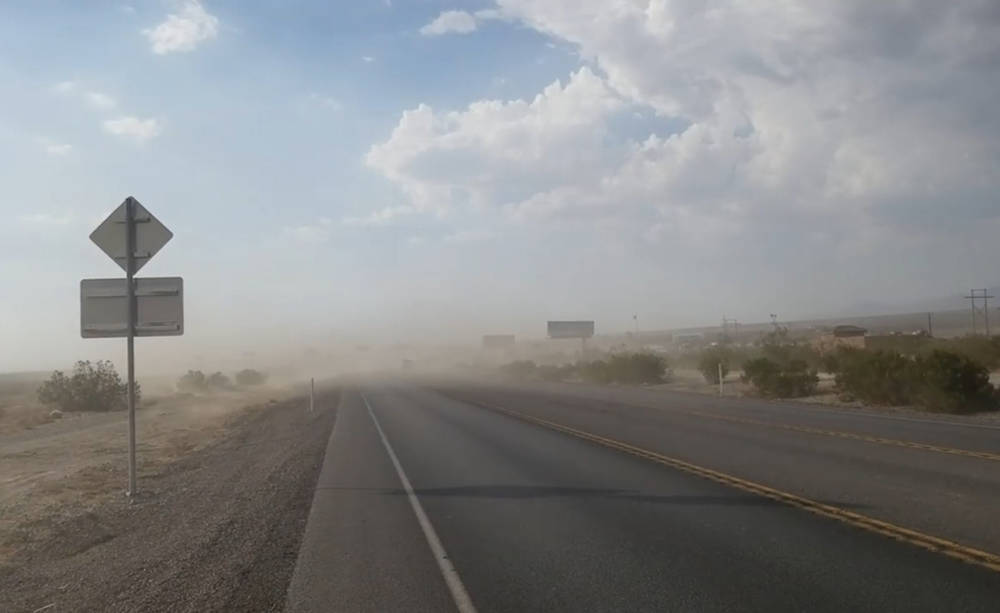 David Jacobs/Pahrump Valley Times Concerns about the rising levels of "PM 10" dust, or particulate matter 10 microns in size, were the subject of a recent presentation by Air Quality Specialist Eric Florio. 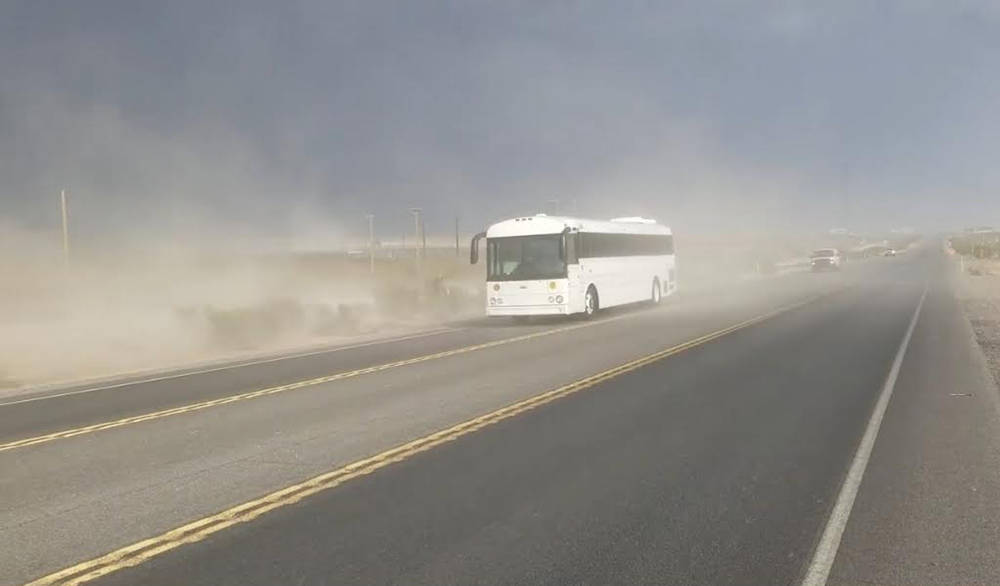 David Jacobs/Pahrump Valley Times This file photo shows dust filling the air in the Pahrump Valley on a windy day last year. A recent presentation to the Nye County Commission detailed that Pahrump is once again approaching noncompliance with the National Ambient Air Quality Standard. 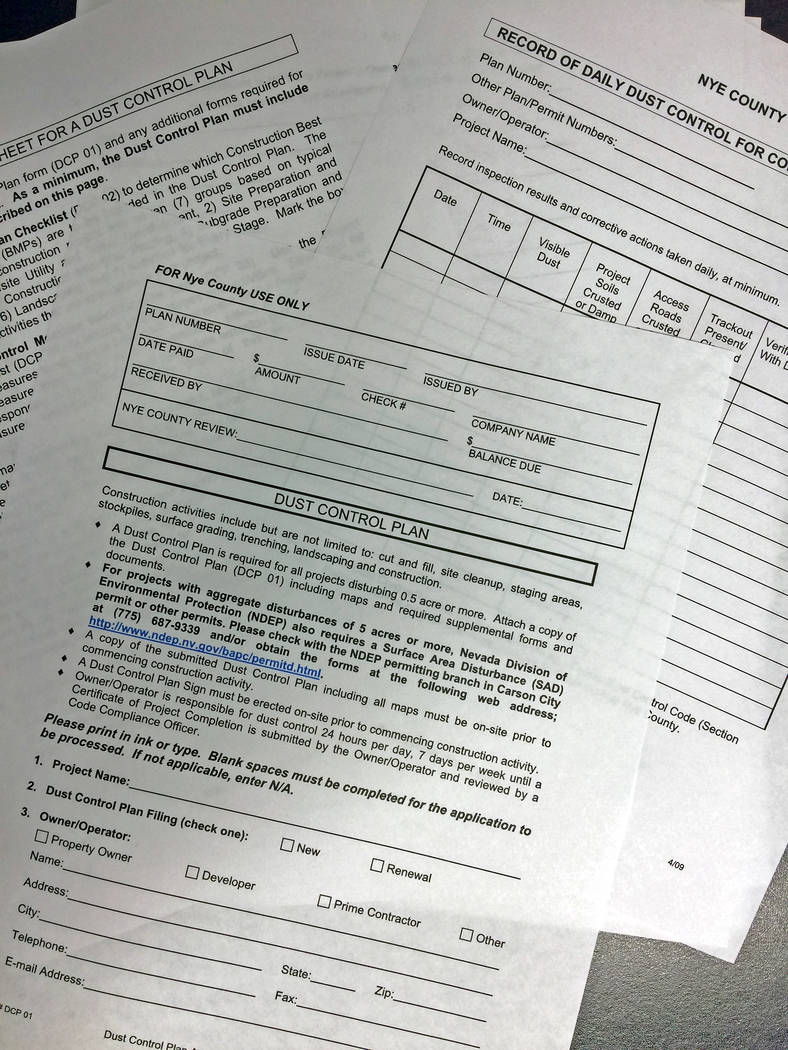 Robin Hebrock/Pahrump Valley Times A Dust Control Plan is required for all projects that disturb 0.5 acres of land or more in Pahrump, per Nye County Code.

Though officials insisted it was not intended to be a threat, a warning of sorts was issued to Nye County last month when an air quality specialist explained that the county must keep a tight handle on its dust problem, otherwise outside governmental agencies could come in to enforce dust control restrictions and regulations.

Air Quality Specialist Eric Florio, appearing at the Nov. 19 commission meeting on behalf of the University of Nevada Reno, the Nevada Division of Environmental Protection and Nye County, began his presentation by detailing exactly what “dust” is. The term means particulate matter, or PM, of 2.5 microns and 10 microns in diameter, PM 2.5 being finer than PM 10.

“To give you a little bit of a reference, human hair is approximately 50 to 70 microns in diameter so PM 10 particles are five to seven times smaller and PM 2.5 is 20 to 30 times smaller than a human hair,” Florio informed the commission.

The most common sources of dust, Florio said, were burning fuel, diesel combustion from vehicles, crushing or grinding from industry and other industrial processes and dust from unpaved roads, construction sites and other disturbed land surfaces.

For Pahrump, fugitive dust emissions from vacant land were by far the largest source of PM 10 dust, according to Florio’s information, making up more than 50 percent of the fugitive dust problem. Unpaved local and arterial roads were another major source of local PM 10 dust, with Florio stating that these three factors alone comprised more than 91 percent of the area’s dust sources. The problem is further complicated by the valley’s natural conditions, such as high wind events, he stated.

“The reason we are concerned is because breathing high levels of PM 10 or PM 2.5 is harmful to lung tissue and aggravates asthma symptoms. Inhaled particles can pass from the lungs into the bloodstream and impact the cardiovascular system,” Florio said, adding that on top of health complications, dust also negatively affects the environment.

The quantity of these fine particles became an issue for Pahrump in the early 2000s, leading to state and federal authorities’ involvement in local control of the situation. The actions taken then, including limiting vehicle access, watering, re-vegetation, dust control plans and more, helped to bring the valley back into compliance with the National Ambient Air Quality Standard by 2009.

However, Florio said, Pahrump is now creeping back toward noncompliance, with the number of air quality standard exceedances approaching those from 2003 when state and federal officials had stepped in.

“If this trend continues, it is possible that Region 9 EPA from San Francisco, California will get involved,” Florio told the board, adding that once an area is designated as being in “non-attainment” it can take years and a large amount of resources to return to attainment. “They can make it very difficult.”

Nye County Commissioner Leo Blundo, for one, seemed to find the concern with dust somewhat confusing, considering the fact that Pahrump is a naturally dry, dusty place.

“I just listened to your whole presentation, I mean, we live in a desert,” Blundo said, with several audience members chuckling in response. He later added, “I believe we are doing everything we can to mitigate and do dust control but at the same point I have to be reasonable. We live in a desert… There are just things outside of our control.”

Nye County Commissioner Donna Cox agreed, stating, “It’s just life. It’s like, we live in a desert.” Cox added that there are several other things to take into consideration, including a ramping up of development once again, and local water concerns, which are leading residents to limit the vegetation they grow, plants that could help control the dust.

“There’re a lot of problems,” Nye County Commissioner John Koenig concurred. “We talk about new roads and things and the best way to control that is to water the roads. Again, we go back to the point that, we have a water problem. No matter what we do, we have problems with it all. I don’t know where we are going to end up. If people keep coming here and we keep building more houses and there’s more and more and more construction, there is going to be more dust.”

Florio acknowledged the fact that Pahrump is in a desert before explaining, “Unfortunately you guys have had bad problems in the past which caused NDEP to come in.”

Nye County Planning Director Brett Waggoner jumped into the discussion to assure the commission, “I just want to reiterate, the purpose for which we invited Eric here today for the presentation is not, by no means, a threat or anything. It’s just something that we have to put a little bit more focus on, in best practices. Just to try to get an awareness out there again that we are approaching a non-attainment status. The only purpose of this at all is to remind people to watch what we do and try to use best practices to try to control the dust.”

Florio nodded before continuing, “Like I said, I am here somewhat on behalf of NDEP, I am a third party intermediary, so just that fact alone shows that they are somewhat taking notice. Like Brett said, you guys don’t want to be forced to spend the money, so there are maybe some little measures that can be taken… They (NDEP) are getting somewhat concerned.”

Nye County does have dust control regulations for the Pahrump Regional Planning District, detailed in Nye County Code Title 15. The dust ordinance outlines control measures that must be taken.

For a variety of information and resources regarding local dust control efforts visit www.nyecounty.net and click on “Planning” under the “Departments” drop-down menu. Use the “Air Quality” link to access the dust ordinance, dust control handbook, dust complaint forms, applications for required dust control plans and more.