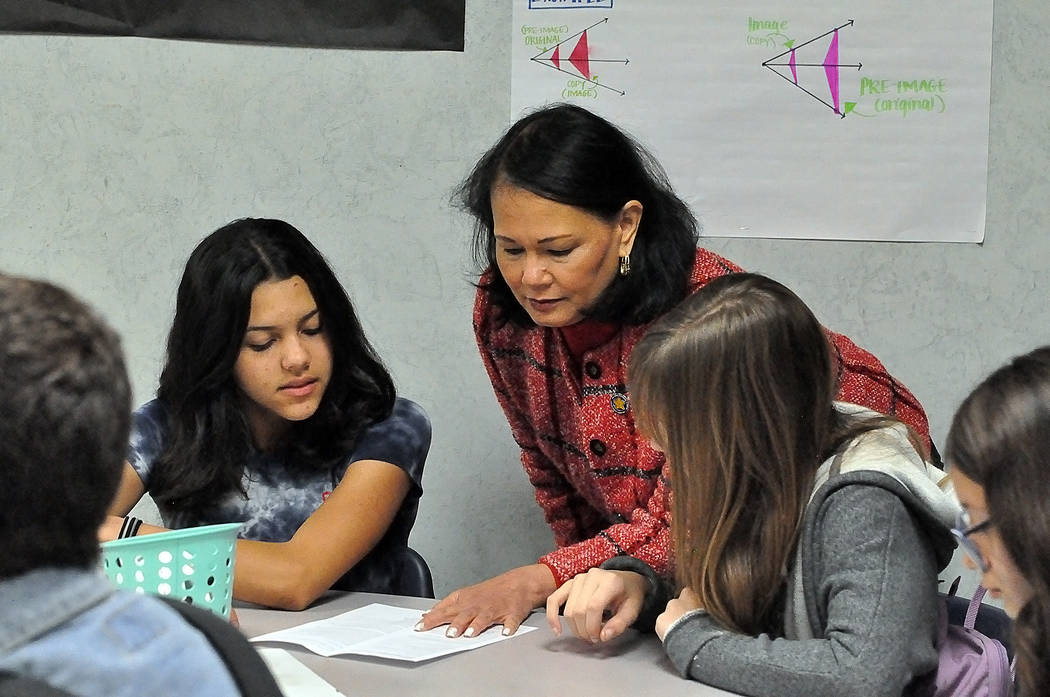 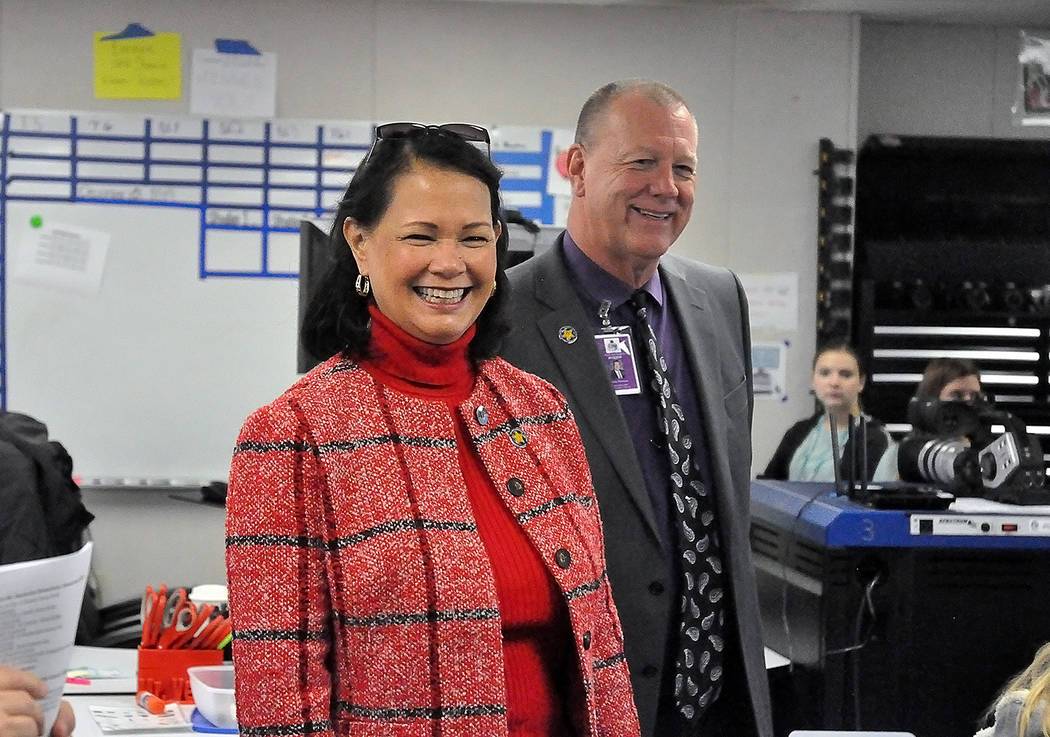 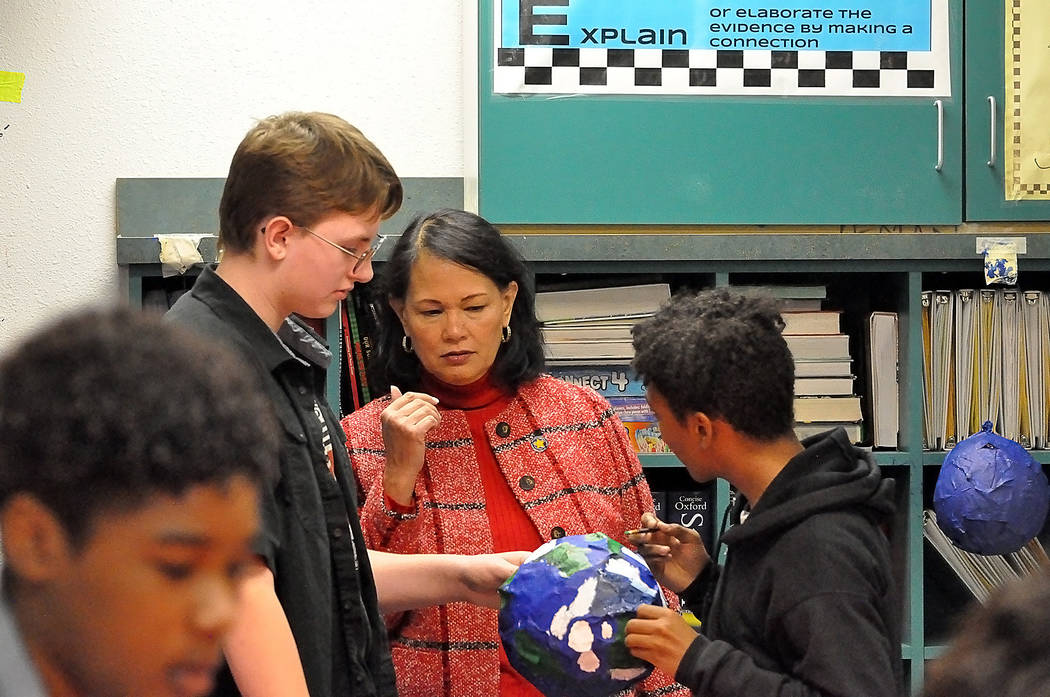 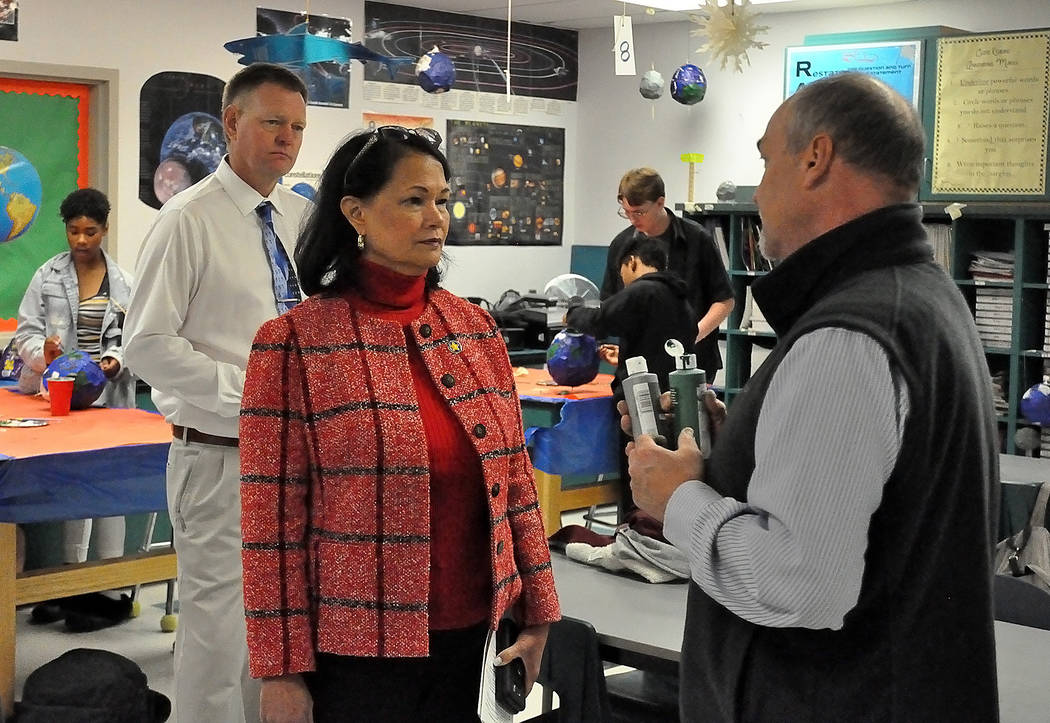 Roughly eight months after her appointment as Nevada’s new State Superintendent of Public Education, Jhone Ebert is visiting campuses throughout the Silver State.

Last week, Ebert, along with Nye County School Superintendent Dale Norton and Associate Superintendent Kyle Lindberg, dropped by all three schools in Tonopah for a professional roundtable meeting before touring the campuses and visiting with students and faculty members.

She also participated in a family and community public forum during her “listening tour” session on Tuesday evening at the high school.

“The listening tour has been great,” Ebert said. “We were up in Tonopah early last week, and of course we were blessed with snow, but we had a great time by starting the morning talking with the educators. We met phenomenal teachers, toured the classrooms and had a wonderful time there. It was really nice to see how much the students are engaging with each other during their learning.”

Ebert also said she was pleased to see many students expressing concerns at their respective schools.

“As I’ve been doing my listening tour, a lot of students have said that they would appreciate more projects and project-based learning,” she noted. “That’s pretty much what I’ve seen in every classroom that I’ve been in, which is very nice to see.”

Regarding the public forum, Ebert spoke about the importance of visiting Silver State schools, as part of her regular duties.

“It’s important for me, especially being a new state superintendent, to visit all of our communities in our state,” she stressed. “As most people know we are a very diverse state and we are required to do a state improvement plan, which is due to reach the Legislature by next spring. I don’t believe that I can do a plan unless I understand the context of our state.”

As reported in a recent edition of the Pahrump Valley Times, the organization Results For America, released a case study about evidence-based work conducted by the Nevada Department of Education in the Nye and Humboldt County school districts.

“We were very proud to be recognized, and hopefully superintendent Dale Norton can capitalize on that work with the Every Student Succeeds Act,” Ebert said. “School districts that were looking to improve, needed to use evidence-based programs to be able to move achievement for the students. The State Department of Education has been very pleased to partner with the Nye County School District, the Humboldt School District and Elko as well as others to help our students succeed.”

Additionally, Ebert spoke of the importance of communities to have a voice in terms of public education.

“Regarding the Results for America case study in Humboldt and Nye County, all of the constituents that we serve need to have a voice, especially when we are preparing for the next legislative session and working with the governor,” she said. “The governor cares deeply about education, so hearing from everyone is extremely important. I was extremely honored to be appointed to this position by Governor Steve Sisolak.”

In March, the governor appointed Ebert, who served in the Clark County School District for 25 years, most recently as chief innovation and productivity officer and chief technology officer.

Ebert, who is the recipient of numerous professional honors and awards, also served in a variety of leadership roles within Clark County School District and began her education career as a mathematics teacher in Las Vegas.

She received her master’s of education degree in instructional and curricular studies from the University of Nevada, Las Vegas.

She earned her bachelor of arts in mathematics from California State University Fresno.