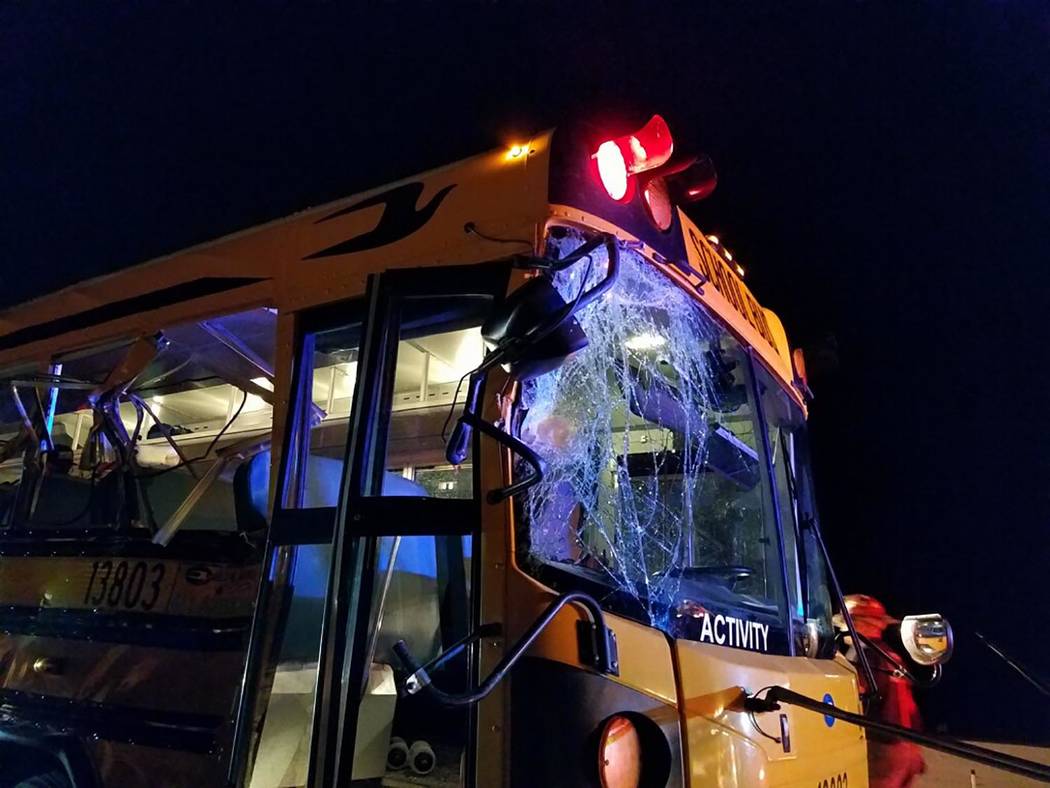 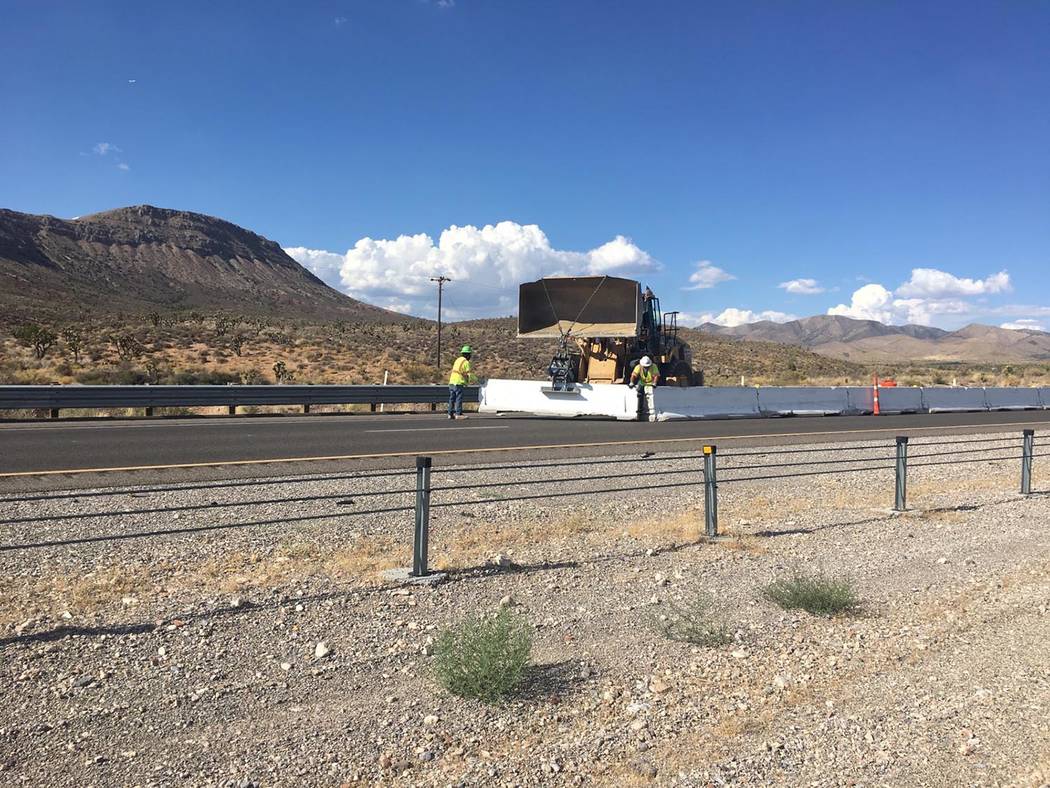 Photo courtesy Nevada Department of Transportation This photo shows an example of a front-wheeler loader with a special attachment used for moving concrete barrier rail. 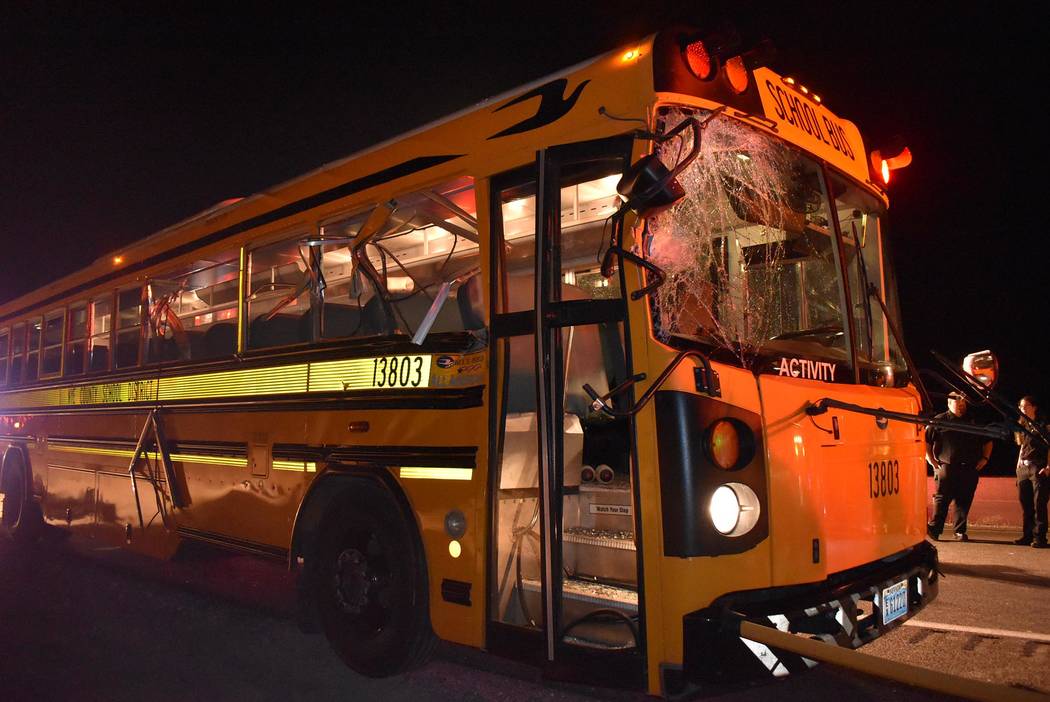 Special to the Pahrump Valley Times The crash occurred south of Pahrump along Nevada Highway 160 near the Tecopa turnoff, the Nye County School District reported.

At least four students were transported to area hospitals following a crash along northbound Nevada Highway 160, on Thursday night, Sept. 5.

At the time, the students were returning to Pahrump from Las Vegas after a junior varsity football game just before 11 p.m.

The incident occurred in a work zone south of Pahrump near the Tecopa turnoff, when the operator of a heavy construction vehicle struck the school bus while removing barriers from the roadway, officials reported.

“We were notified this morning all four students have been medically released with minimal injuries,” the school district said in a statement.

NDOT spokesman Tony Illia said in an email: “Apparently, a Nye County school bus was side-struck by a front-wheeler loader with a special attachment used for moving concrete barrier rails.”

The NDOT contractor, who was not found at fault, was moving barrier rail along the westbound lanes when the crash occurred, Illia said.

Nye County School District Transportation Supervisor Cameron McRae said approximately 40 students and two coaches, along with the driver, were on the bus at the time.

“While the bus passed, one of the pieces of equipment doing the work encroached into the roadway and hit the school bus in the passenger-front area, doing significant damage to the school bus and injuring some of the students on board.”

Pahrump Valley Fire and Rescue Services Chief Scott Lewis said EMS crews from both Clark County and Pahrump responded to the scene, which met the criteria of a mass casualty incident.

Lewis noted that upon arrival, crews found the bus parked on the shoulder of the highway in the northbound lanes, where they completed a scene size-up and risk assessment, and found that the majority of the occupants of the bus were in a safe area, located well off the shoulder of the roadway.

“Those units assessed those who were injured, and it was determined that two patients met flight criteria,” Lewis said. “Mercy Air 24 and Mercy Air 7 were brought to the scene. Pahrump Valley fire crews managed the landing zone, where patient care was transferred and those two patients were flown to UMC Trauma. Another patient was transported from the scene by a Clark County unit to Desert View Hospital.”

Additionally, Lewis said the remainder of the students were transported back to Pahrump Valley High School, where they were reunited with their parents.

“At one point, we did a secondary triage on some students, where one student was transported to Desert View Hospital from the high school,” Lewis said. “The school district did a great job helping us manage the occupants and students on the bus. The coaches also did a good job keeping everyone calm. There were also two off-duty Nye County Sheriff’s Office deputies who were in the immediate area because they had kids on the bus. They did an awesome job helping to stabilize the incident.”

McRae, meanwhile, said after reviewing the video footage of the incident, the students on board handled the circumstances around them very maturely and calmly.

“I was extremely proud of them on how they reacted to the event, while district staff, first responders and everyone else showed up on scene to assist,” he said. “Our travel fleet will be down one less relatively-new bus, but it’s not going to inhibit us from providing transportation. We will just shift another older bus back into the travel fleet until the issue is adjudicated through insurance and we can hopefully find a suitable replacement for it. There was severe structural damage to the school bus body.”

The NHP is leading the investigation into the crash.

The crash occurred at mile marker 36 in Clark County.

Nye Schools Superintendent Dale Norton thanked “all responders for their quick action and for putting the safety of our students and staff first and foremost,” the statement said. “He would also like to thank the parents and good Samaritans who stopped to assist.”

“Superintendent Dale Norton commends the coaches, student-athletes and the driver for their actions immediately following the accident during a time of crisis,” the statement said. “Given the circumstances, everything was handled very well.”

NDOT’s Illia said that the road project — along the main route connecting Pahrump and Las Vegas — includes widening Highway 160 and rehabilitating 22 miles of deteriorating roadway from roughly the Nye County line to the Mountain Springs community.

The Pahrump Valley Times is seeking additional information on any NHP findings.