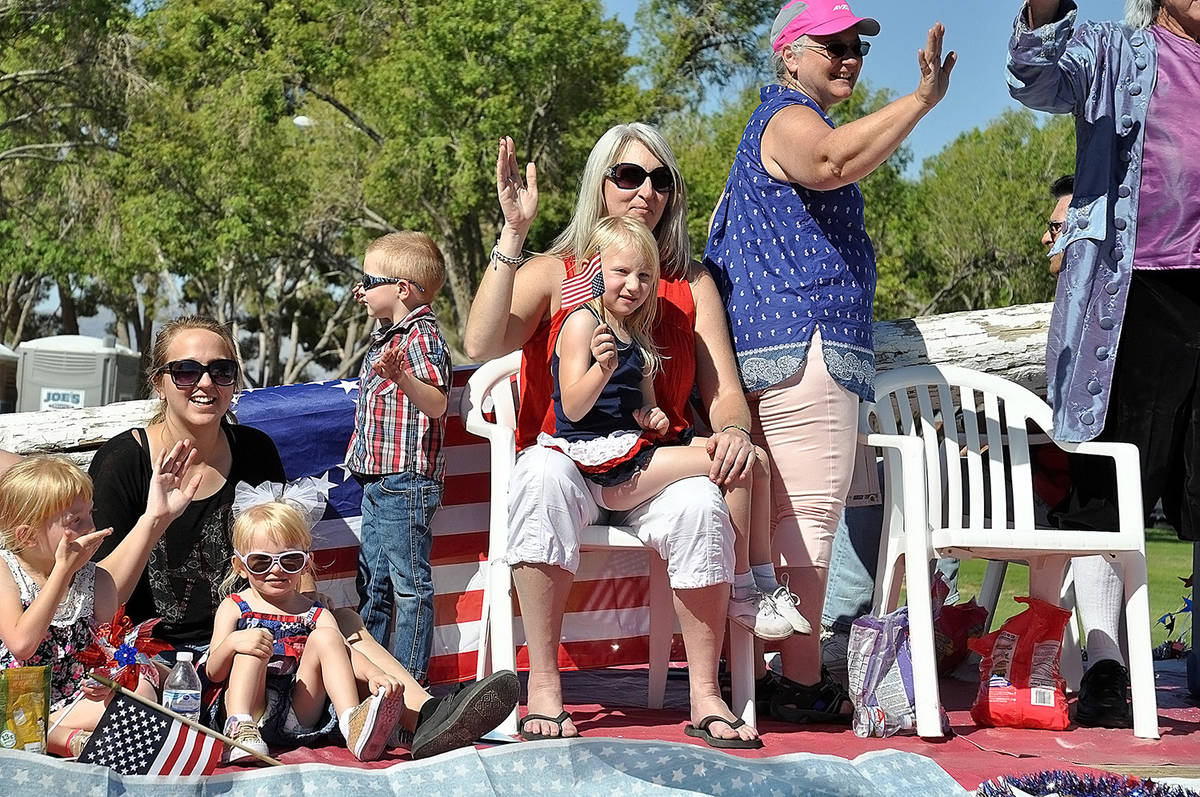 Horace Langford Jr./Pahrump Valley Times This file photo shows a family enjoying a past Fourth of July Parade in Pahrump. This year's parade is set for Saturday, July 3 at the Calvada Eye. 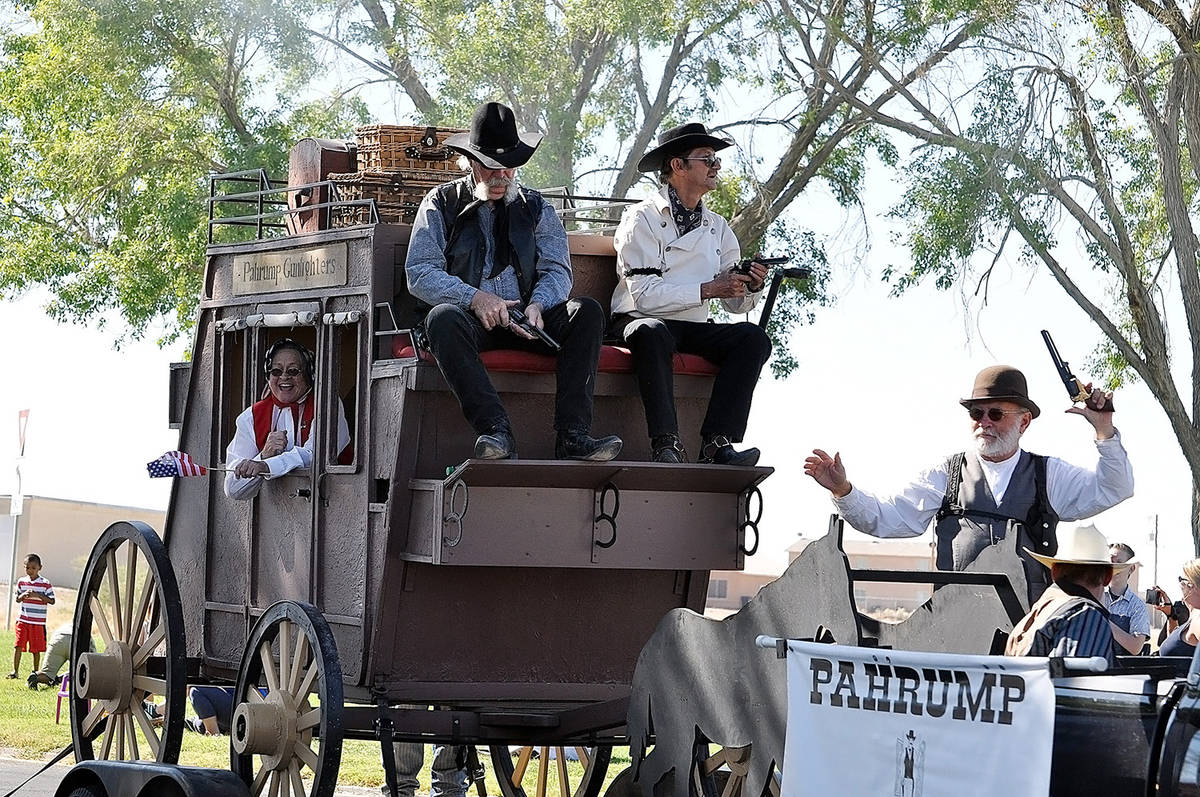 Horace Langford Jr./Pahrump Valley Times The Pahrump Gunfighters are one of the groups expected to participate in the Pahrump Holiday Task Force's Fourth of July Family Celebration on Saturday, July 3.

In addition to the parade, the task force is also bringing a full-on festival to the Calvada Eye and this will be the first such event for the holiday that has been held in the valley for many years. The only thing the task force needs now is for the community to get involved, either by signing up for the parade, volunteering for the event or simply marking their calendars and heading out on Saturday, July 3 to enjoy the parade and the plethora of activities to follow.

Coming straight out of a meeting of the Pahrump Holiday Task Force on Monday, June 21, organization chair Linda Wright told the Pahrump Valley Times that things were well underway and she and her fellow task force members are anticipating a day full of free family fun.

“Well, we still need more entries for the parade, because we only have 11 confirmed so far and we’d like to have many more than that taking part,” Wright detailed. “We do have some new entries to the parade, which is exciting, and I am just hoping to make it a very good parade for our first, inaugural Pahrump Holiday Task Force Fourth of July event. This parade has been my baby, I have been involved in it for years, and I am so pleased that people want to come out for it. I just really want it to be something great for our town, something to really show our patriotism and American spirit.”

Wright said the group has also implemented a new feature to the Fourth of July Parade, with a grand marshal set to lead the procession around the Calvada Eye, but just who that person will be is being kept under wraps for now.

“We have chosen a grand marshal, but we’re going to keep who that is a secret until the day of. But that is something new we’re going to be doing and we’re very excited about that,” Wright said. “Every year going forward we will have some criteria set and will be selecting someone from the community, but for this year, we already had a good idea of who we wanted to honor with that. So that will be something fun for people to look forward to seeing on July 3.”

Once all of the parade entries have made their way around the parade route, the formal awards ceremony will take place, with trophies going to the best entries for a variety of categories. The grand marshal will also be receiving their very own special award.

“The deadline to register for the parade is Thursday, July 1, so that we have time to organize everything and get the lineup ready,” Wright said. “The entry fee for the parade is just $25 and we want everyone to know, that money will go straight into the task force’s coffers to help support the other events we do every year for Thanksgiving, Christmas and Easter. Every dollar we earn at the event and every donation we receive will be used to support our efforts in bringing these events to the community each year.”

As to the festival that will follow the parade, Wright remarked, “Preparations for the celebration at the Eye are going really well. I’m super excited that we just got confirmation, we’re going to have a flyover. It will be two planes and they are going to fly over the Calvada Eye, weather and wind permitting, and have red, white and blue smoke coming out of the planes. We’ve never had anything like that before for the Fourth of July! It’s a new sponsor and host of the Independence Day events and new things are happening. I’m trying to make it even better than ever before.”

The task force’s Fourth of July celebration will include a free meal for attendees, with hamburgers, hot dogs and chips on the menu and there will be a wide array of free pursuits to families to take part in during the event.

“We have already decided on some of the games we will be playing. We’re going to have corn hole and ring toss, we’ll have a table with bubbles on it and we’re going to have face painting. There will be a watermelon-eating contest too, a water balloon toss, a bounce house, hula hoops for the kids to play with and there will be a couple of other activities too, we’re still working on that. So there will be a whole variety of family-oriented fun for our community,” Wright said.

“We could still use some food donations, and of course, bottled water is very important, so we very gladly take any water donations,” she continued. “And we’d love to have some more volunteers to help out with the games and activities that afternoon.”

The Pahrump Gunfighters jail will also be set up at the Calvada Eye, with Wright noting that for a donation, people will be able to have a fellow event attendee “arrested” and that person will then need to be “bailed out” via another donation.

One of the items Wright is still working to secure is a dunk tank and she remarked that she is hoping to get some of the valley’s most notable figures to come out and volunteer to sit in the dunk tank as part of a fundraising effort as well. “Then people will be able to, for a donation, get the chance to dunk them!” Wright enthused.

“Everything is working on schedule and we are just hoping everyone comes out and watches the parade and then stays afterward to enjoy all of the fun in the Eye. And we’d love to hear the feedback from attendees. We’d love to hear, after it’s all over, what people think, because that is what we are here for. It’s for the community,” Wright concluded.

The Pahrump Holiday Task Force’s Fourth of July Family Celebration is set for Saturday, July 3 at the Calvada Eye. The parade is scheduled to begin at 10 a.m. and the festival will take place afterward.

For more information or to sign up for the parade, make a donation or volunteer for the event, contact Wright via email at pahrumpholidaytaskforce@gmail.com or call 775-419-7857.