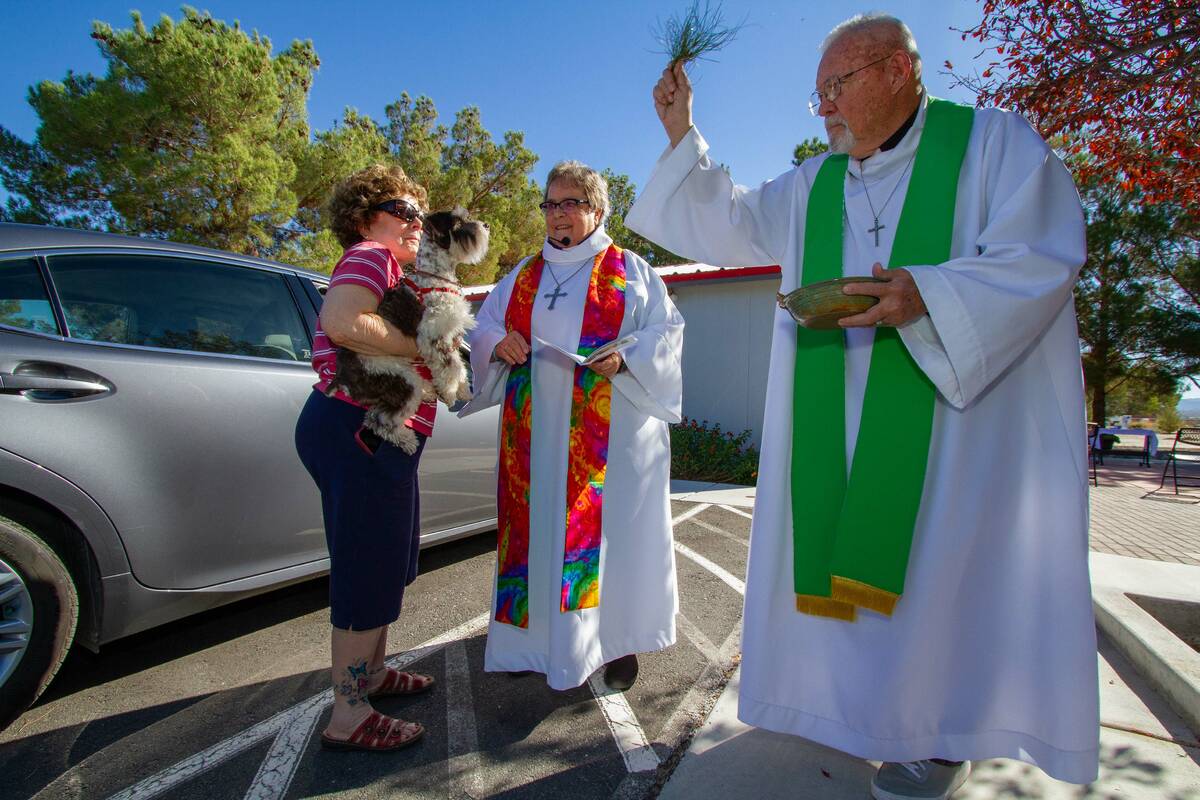 John Clausen/Special to the Pahrump Valley Times Judy brought three Airedales to be blessed. The Rev. Lola Culbreath and Father John McClatchy are happy to comply. 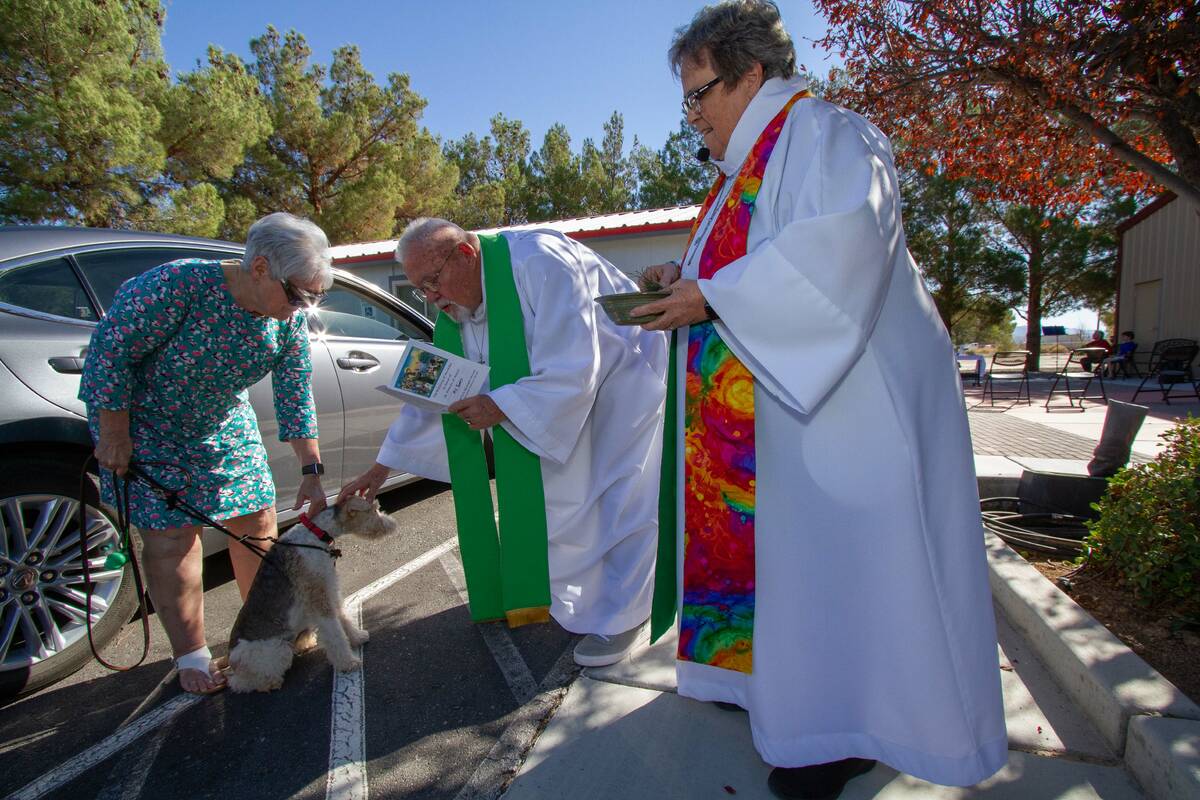 John Clausen/Special to the Pahrump Valley Times Airedales Jackson, Maxwell, and Jazzy were all blessed Saturday. The Rev. John McClatchy accommodated the lively trio by blessing them by the car, away from those assembled. 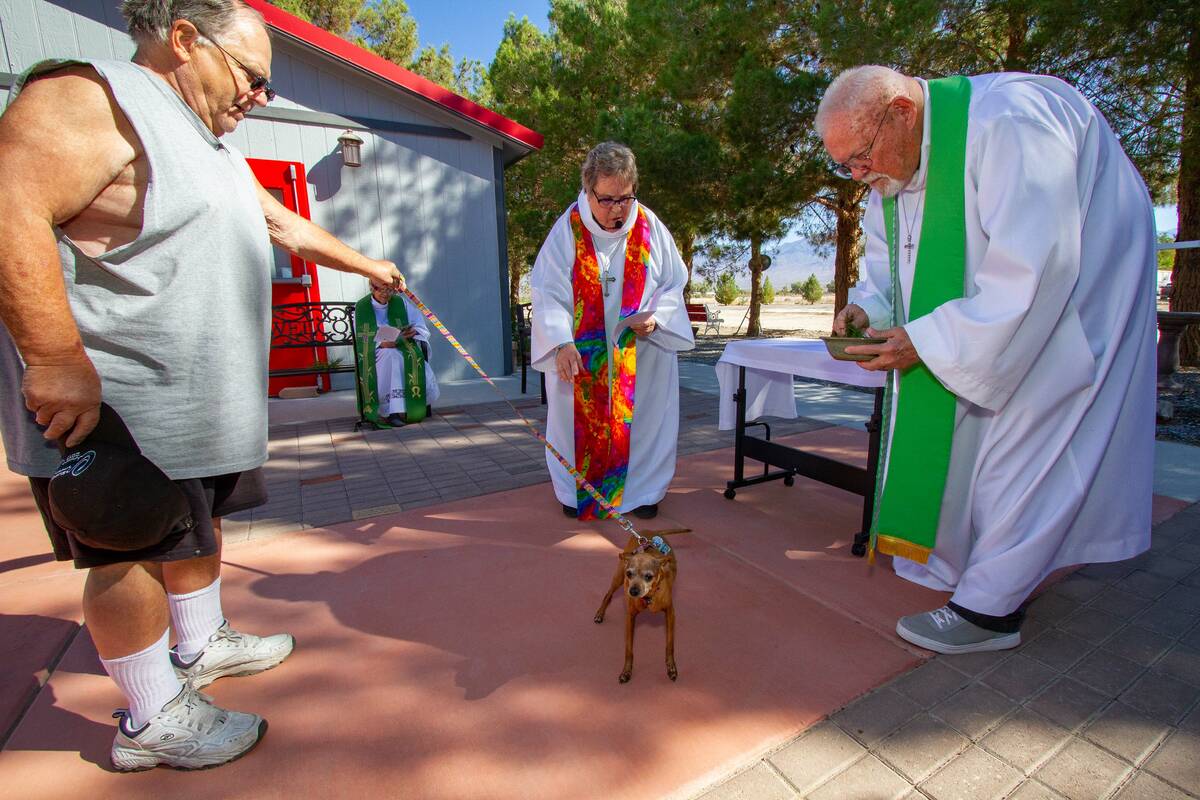 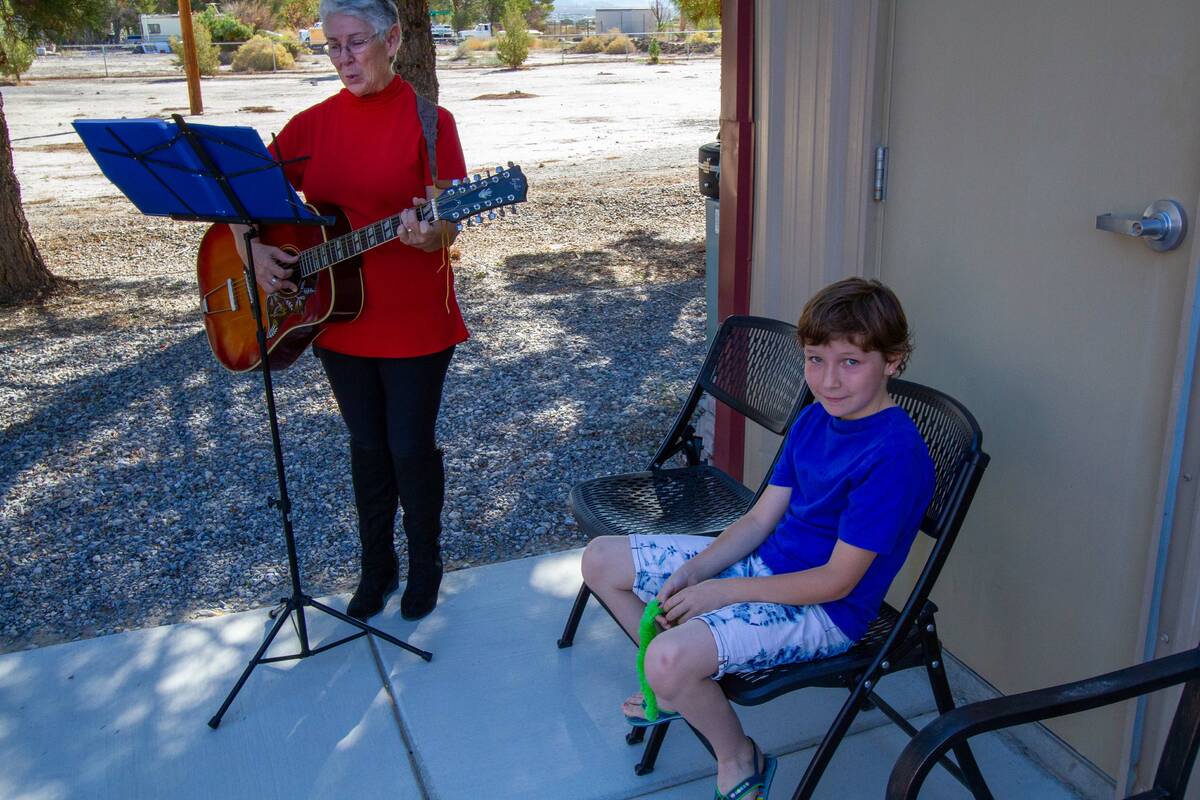 That’s why three ordained priests were on hand Saturday, Oct. 1 to bless some pets and their owners who cherish them.

Every year on or around the fourth day of October, the faithful gather to celebrate St. Francis Day in honor of the patron saint of animals: Saint Francis of Assisi.

In remembrance of his love for all creatures, pet parents take their animal companions to church for an official Blessing of the Animals.

“The relationship people have with their pets is essential, and the church recognizes that,” said Father John McClatchy of St. Martin’s in the Desert Episcopal Church, one of the priests who performed blessings there this weekend.

The Rev. Lola Culbreath, who led a short service at the event, pointed out that animals share in the fortunes of human existence and have a part in human life.

According to the Bible, animals were saved from the Great Flood, and afterward were made a part of the covenant with Noah. A giant fish saved Jonah. Ravens brought bread to Elijah.

Lydia Wiltse played acoustic guitar at the service and was accompanied by 10-year-old Leah Wiltse.

Wiltse said she has a bearded dragon, a turtle and a cat — but it wasn’t practical to bring them for a blessing.

“The bearded dragon would just bite everyone, and the turtle is too happy in his water,” she said. “I didn’t want to upset him.”

As it goes, the most portable pets tend to be blessed: usually dogs and cats.

But in 2019, St. Martin’s blessed a pet goat. That was the same year a wild horse wandered in the area a few days before the event. The Rev. Culbreath said she would have liked to bless the animal. She saw a crow flying around Saturday morning, and hoped that it would fly in for a blessing.

Still, others did come with their animals.

Phyllis showed up with Bear and Pepper. They’re half chihuahua and half “Heinz 57,” she said.

The woman has had a 10-year relationship with the dogs.

“I was there when Pepper was born. He had wrinkles all over his face. I knew he was the one,” she said. “Bear — Pepper’s litter mate — belonged at first to a neighbor. They had to move, and I asked to take him in, too.” They agreed to let Phyllis adopt Bear. Now the three are inseparable.

Father McClatchy said he was overjoyed at the gathering of people and animals on Saturday — yet he remained realistic about accommodating unpredictable animals.

“Remember, rigid flexibility,” he said. “That’s the key to success!”

Chairs were set up on the shady patio outside the sanctuary with plenty of space between to keep rowdy pets separated.

“We can’t blame pets for acting like animals. They get scared sometimes, and they need space,” the priest said.

A “drive-up” blessing of three terriers occurred at 9:45 a.m.

The excited Airedales were blessed individually, and Judy was blessed three times in the process.

Pine boughs were used to distribute the Holy Water.

“May you be blessed in the name of the Father, and of the Son and of the Holy Spirit,” the priest said. “May you enjoy life together and find joy with the God who created you.”

Father McClatchy laughed at the cacophony of barking dogs as they left.

Zebroski said he was celebrating the two-year anniversary of Ginger’s rescue and adoption.

“When we got her, she was 5 pounds, skinny as a rail,” Zebroski said. “She was in the care of a hoarder. Now look at her!”

Ginger was thriving, but flinched when the Holy water landed on her back.

The next pet blessing at the church is tentatively set for Oct. 7, 2023. St. Martin’s in the Desert Episcopal Church is located at 631 W. Irene.