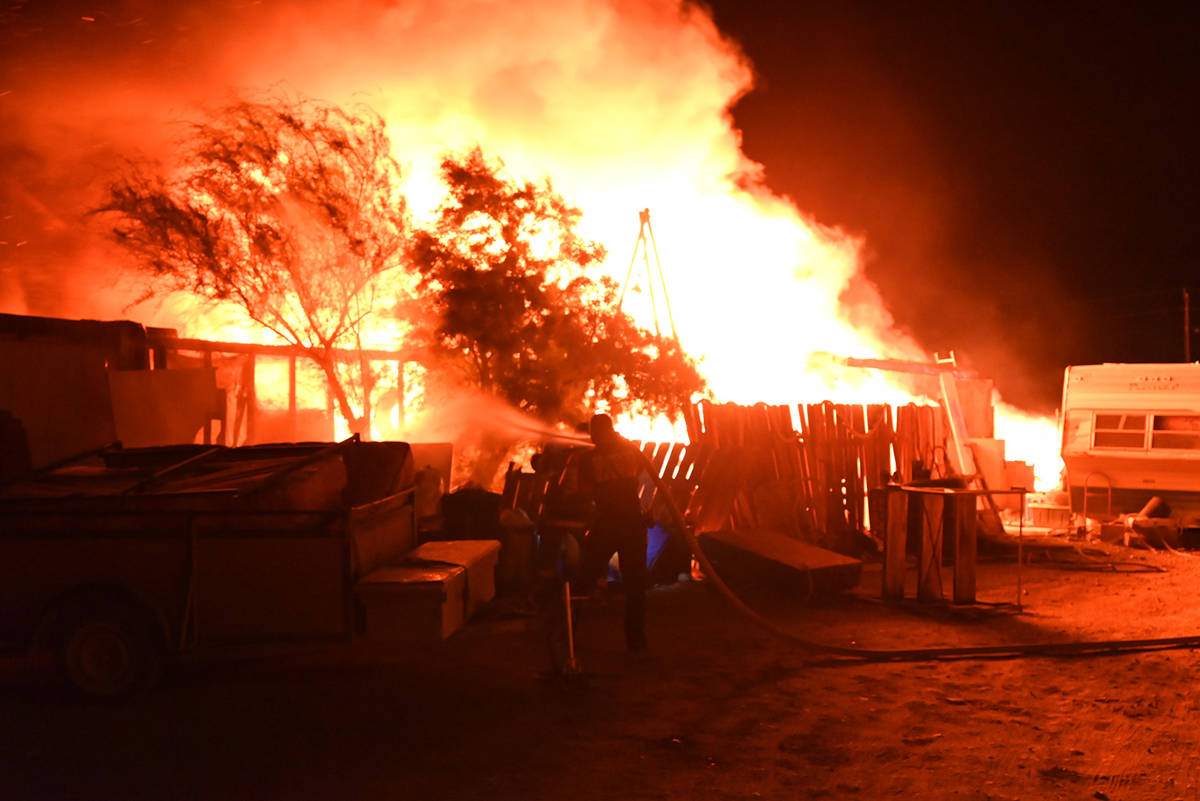 Special to the Pahrump Valley Times On Wednesday evening, June 9, fire crews were dispatched to a report of a well-developed structure fire in the area of Linda Street and Joy Lane. Two individuals who were the occupants of the home were medically evaluated for minor burns, according to Fire Chief Scott Lewis. 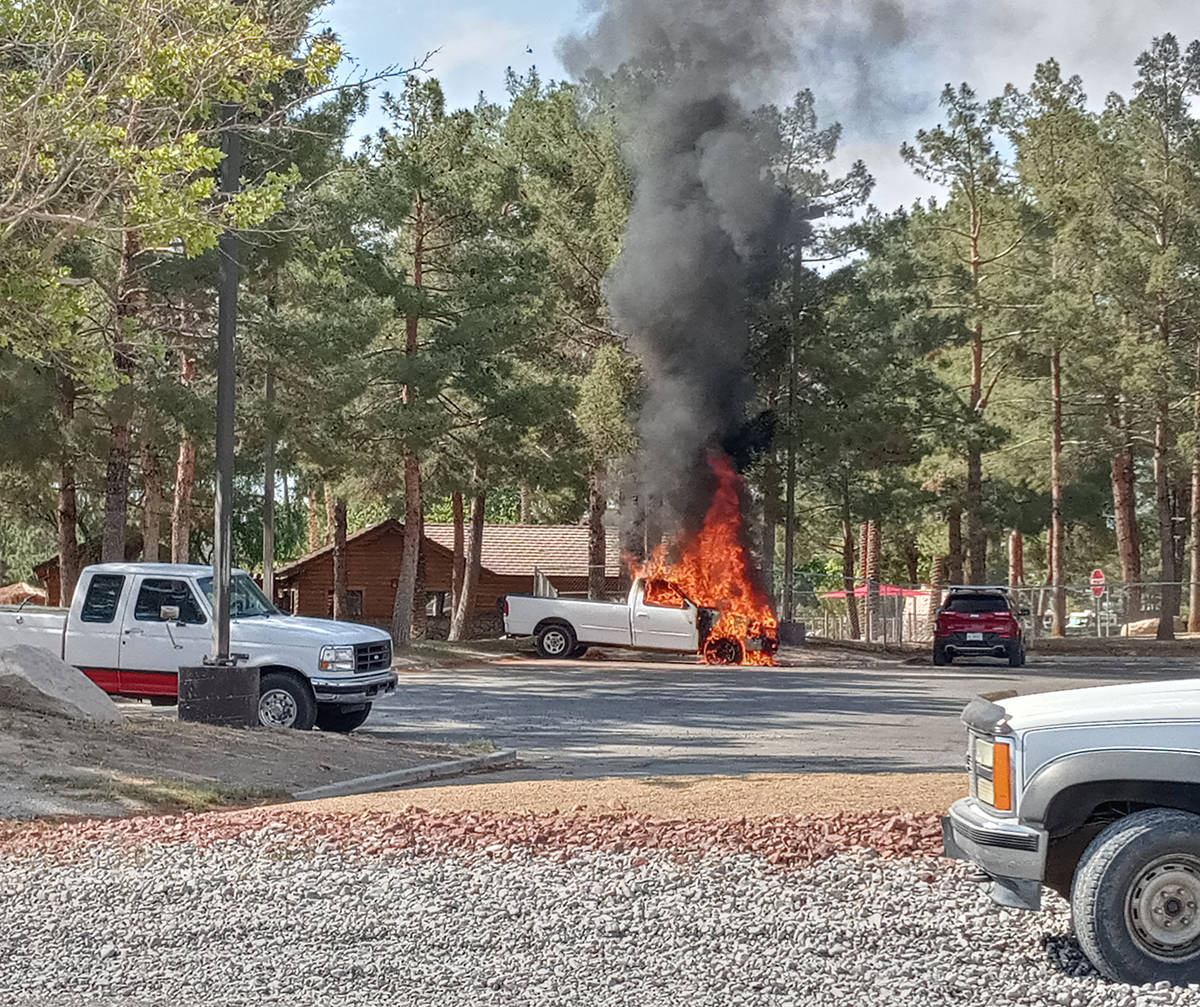 Selwyn Harris/Pahrump Valley Times Fire destroyed a pickup truck in the parking lot of the Lakeside Casino on south Homestead just before 4 p.m., on Tuesday, June 15. The blaze briefly extended to a tree adjacent to the vehicle. No injuries were reported.

Mechanical failure is believed to be the cause of a fire that destroyed a pickup truck in the parking lot of the Lakeside Casino on south Homestead just before 4 p.m., on Tuesday, June 15.

“The immediate exposures included mature conifer trees,” Lewis said. “Crews quickly commenced suppression to extinguish that fire without incident with no further exposure to any of the other trees. The investigation revealed a probable malfunction or mechanical failure causing that fire. There were no injuries.”

On Sunday, June 13, fire crews were dispatched to the 2600 block of south Dandelion Street for a report of a structure fire at approximately 9:53 a.m.

“Crews responded and found a light smoke condition within the structure,” Lewis said. Their investigation revealed a malfunctioning wall outlet that the clothes dryer was plugged into. “The fire had started and went into the walls and was running through the wall studs. Crews exposed that hidden fire and extinguished it without incident. The fire was placed under control within approximately 15 to 20 minutes after arriving. There were no injuries and the cause of the fire is the result of an electrical failure where the dryer plugged into.”

Also on June 13, fire crews responded to a report of a vehicle versus pedestrian collision in the area of Pahrump Valley Boulevard and Idaho Street just after 9 p.m.

“Crews arrived to find the patient, who had sustained trauma as a result of being struck by a passenger vehicle,” Lewis said. “The patient, who was an older gentleman, was walking down the line of the road. He was assessed and was found to have met trauma criteria. We ascertained the status of Mercy Air 21, which was available and the patient was subsequently flown to trauma for further care.”

On Thursday, June 10, Pahrump fire crews were dispatched to a mutual aid assignment to the area of Highway 160 and Sandy Valley for a large brush fire at approximately 1:45 p.m.

“The brush fire occurred on BLM and wildland areas in Clark County, just north of the Mt. Potosi area,” Lewis noted. “We responded with a water supply apparatus and provided support to that fire until we returned later that evening.”

On Wednesday, June 9, at approximately 10:34 p.m., crews were dispatched to a report of a well-developed structure fire, with immediate exposures on the property, including stored personal property and several vehicles in the area of Linda Street and Joy Lane.

“Upon arrival, crews commenced a defensive exterior attack in a no-hydrant area,” Lewis said. “We established water supply via mobile conveyance and controlled the fire in approximately an hour after arrival. All of the exposures were protected, including buildings that were in immediate jeopardy of fire.”

Lewis went on to say that at the time of the fire, the area was under a Red Flag warning throughout the day, which extended past 9 p.m., and into the midnight hour.

Additionally, Lewis said a nearby RV park was among one of the many exposures that was threatened by the fire, which is thought to be accidental or unintentional in nature.

“Two individuals who were the occupants of the home were medically evaluated for minor burns,” he said. “The Red Cross provided assistance and the investigation continues.”

On Monday, June 7, fire crews were dispatched to the area of Highway 160 and Country Place for a vehicle fire at approximately 10:43 a.m.

“Crews arrived to find a well-involved engine compartment fire that was extending to the passenger compartment,” he said. “Crews quickly controlled the fire with no further extension. The vehicle, which had been in use at the time, experienced a mechanical malfunction. The driver pulled off to the side of the road when the fire was discovered. There were no immediate exposures and no injuries.”