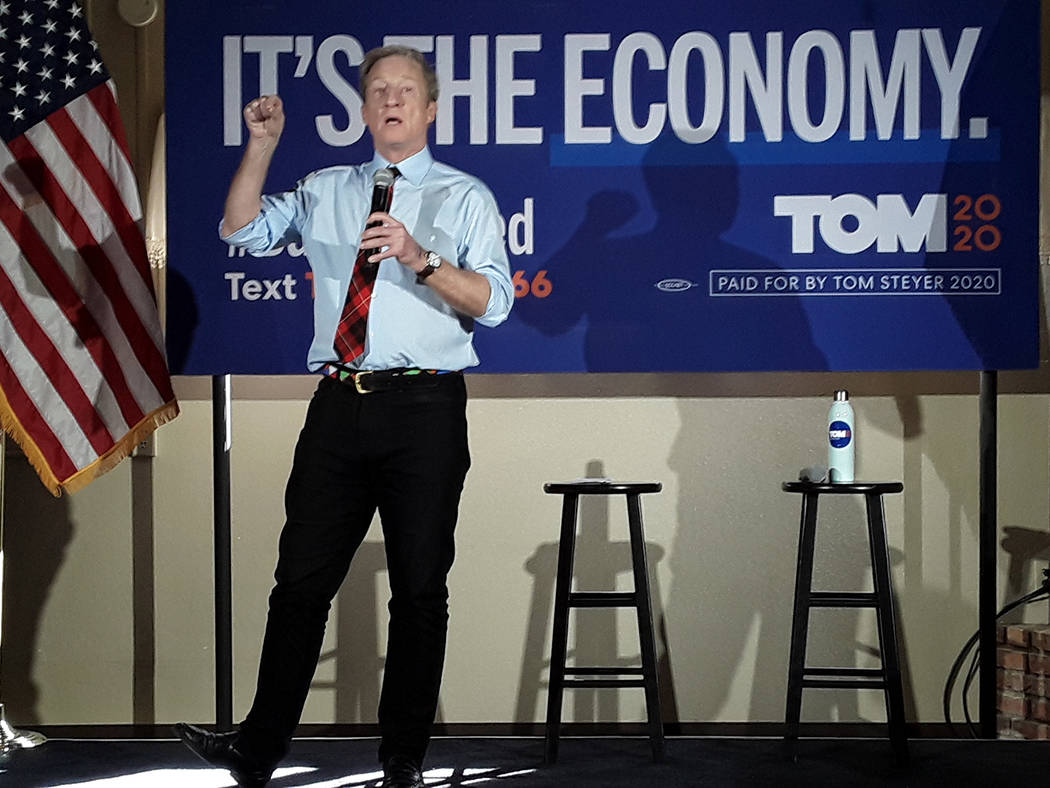 Selwyn Harris/Pahrump Valley Times Democratic Presidential Candidate Tom Steyer made a campaign stop at the Pahrump Senior Center on Wednesday Feb. 19. It was Steyer's 2nd visit to the Pahrump Valley, since his early December visit. 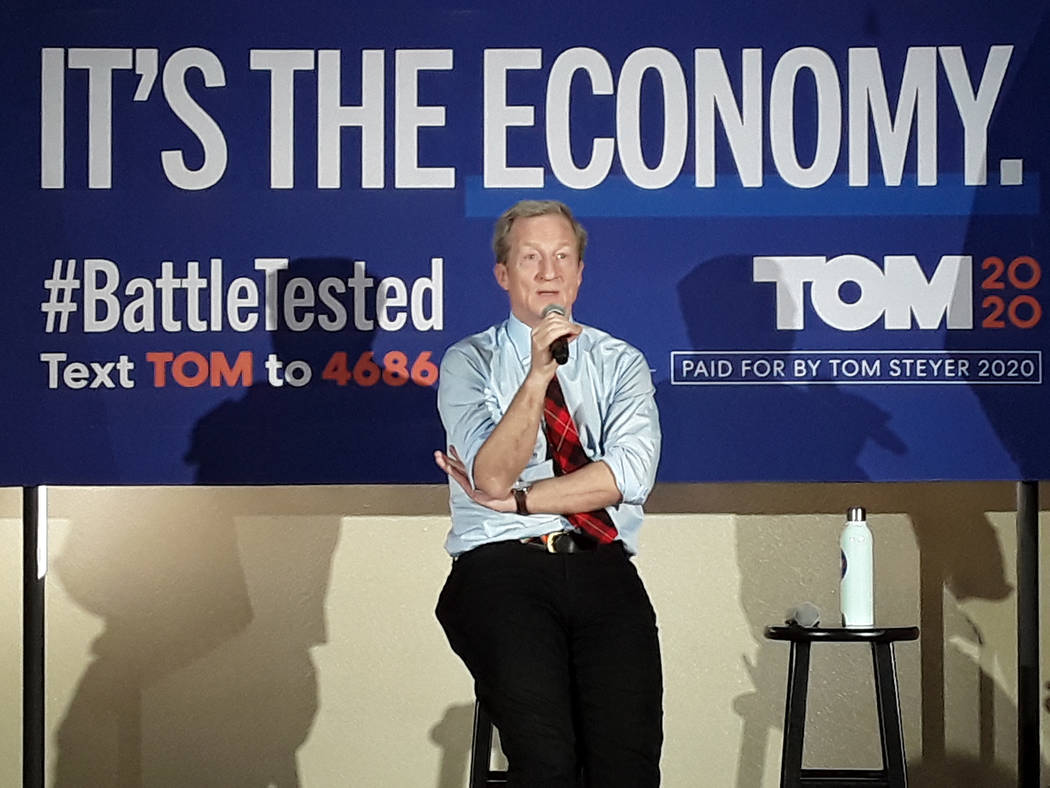 Selwyn Harris/Pahrump Valley Times During his hour-plus visit, Steyer said a $7.25 minimum wage is an insult to working people, while proposing a $22 an hour minimum wage, along with a 10 percent tax cut if elected. 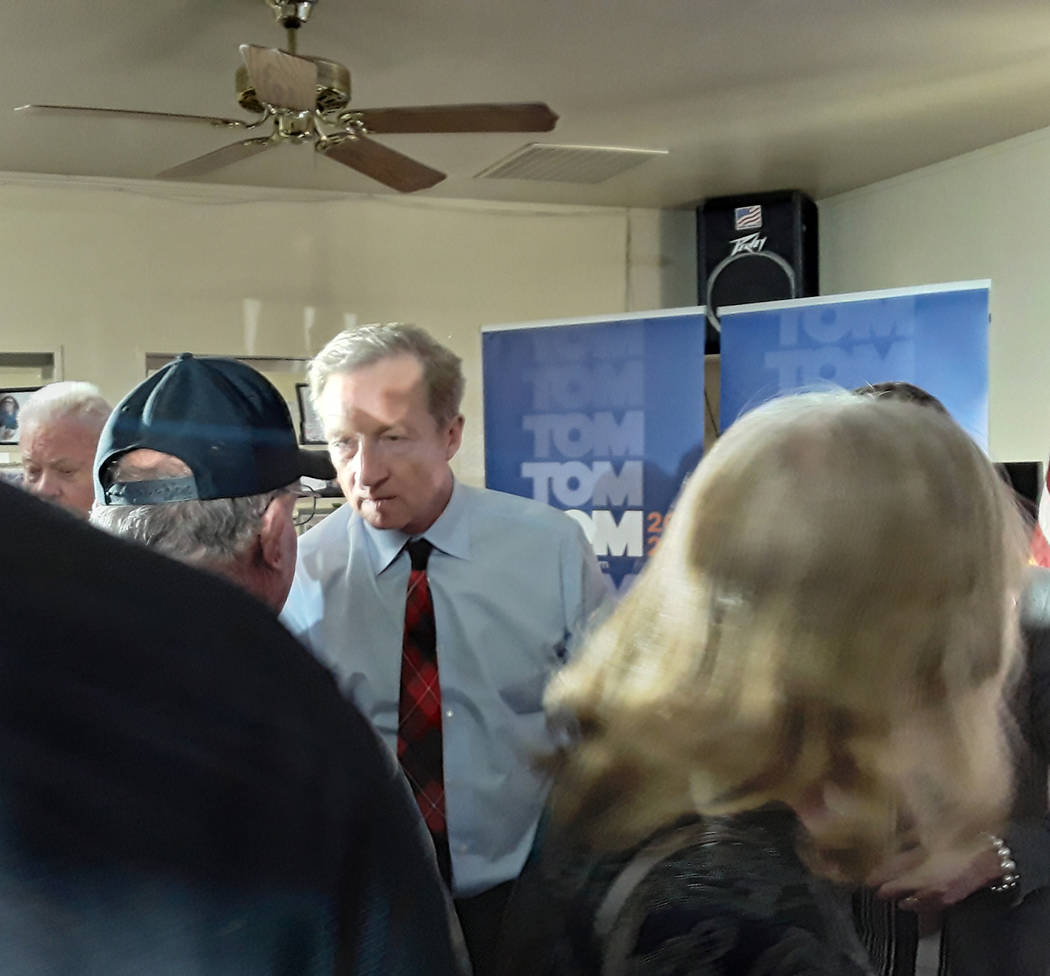 Selwyn Harris/Pahrump Valley Times Following his campaign speech, candidate Steyer took time to personally speak to those in attendance, and pose for photos and selfies at the rally, where upwards of 100 area residents were present.

Upward of 100 Pahrump residents converged upon the Pahrump Senior Center for a meet and greet with Democratic presidential candidate Tom Steyer on Wednesday, Feb. 19.

He launched into his speech by telling the crowd how he earned and built his wealth over the years.

“I started a business and I never inherited a dime from my parents,” he said. “I built it over almost three decades and it got to be a pretty big international multibillion-dollar business and I walked away from it.”

Steyer said, “My wife and I took a pledge to give the bulk of our money away to good causes while we’re alive and I spent the last 10 years basically putting together coalitions of people, like the people in this room, to fight what I think of as unchecked corporate power in the United States, basically trying to fight for the rights of American citizens.”

The first fight, Steyer recalled, began in his home state of California.

“There were two oil companies trying to reverse the most progressive energy laws in the world, which were the California state energy laws,” he said. “It was like a reverse IQ test. If you’re stupid enough to take the job, it’s yours, and I was the only person in California stupid enough to take the job. Everyone knows the oil companies have unlimited money and they are super connected.”

Steyer also leveled a few choice words toward the current president, whom he said is running his re-election bid on the economy.

“It’s almost funny how crass this man is,” he said. “He stinks for the economy, and I want to say this to this group, which includes a lot of seniors, that he did a huge tax cut for rich people at big companies. He said it would balance the budget, but it blew up the budget deficit. It’s now a trillion dollar budget deficit right now. Trump said that he would balance the budget by cutting Medicare, Medicaid and Social Security. Here are the circumstances under which I would personally go along with a Social Security cut: over my dead body.”

Living on a prayer

Working families and individuals were yet another topic Steyer addressed, by saying Americans need a livable minimum wage.

“I would really raise the minimum wage for the tens of millions of Americans who really need it,” he said. “Honestly, you can’t live on $7.25 an hour. If you do the math it’s about $14,000 a year and you cannot live on that. Trump may say the economy is growing, but all the money is going to the rich people. There’s a $7.25 minimum wage in America, and that is an insult to all working people. I have been fighting for a $15 minimum wage since 2012 when I was picketing McDonald’s, but I don’t think even a $15 minimum wage in America is enough. I think a fair minimum wage would be $22 an hour. Having a low unemployment rate, when you can’t live on the minimum wage, is not success. I would give a 10 percent tax cut to everyone who makes less than $250,000 a year.”

Words for the opposing party

Judging from the reaction of those in attendance who cheered and applauded many of Steyer’s talking points, most if not all, leaned Democratic.

Despite that, the candidate also addressed any Republican voters who may have attended the event.

“You will never hear me say disrespectful things about Republican voters because I feel as if they voted to drain the swamp,” he said.

Steyer continued saying, “I just think they elected the biggest swamp rat in history and it’s time to get off the ship.”

Additionally, Steyer suggested the upcoming general election will be teeming with emotion.

Fact versus fiction was yet another issue Steyer spoke about in relation to President Trump’s impeachment trial, and Senate Republicans.

“They just had the biggest cover-up I’ve ever seen where they basically said the president is innocent before we see the facts,” he said.

Steyer continued: “They won’t allow the American people to have witnesses at a trial. We are basically putting the Republican Party ahead of the United States of America, and that’s not okay. As a climate person, I don’t know what to say to a party that says they aren’t interested in facts and science. I thought we ended that fight in the 15th century with Galileo.”

In regard to term limits, Steyer spoke directly about a few longtime Republican lawmakers in the Senate.

“I would say the argument for term limits is Mitch McConnell, Lindsey Graham, and Ted Cruz, and people are going to have to change,” he said.

Steyer went on to say, “We need new and different people in charge and that is the truth. We have a broken government that is not representing the American people. The corruption is deep and we need to change and break that corporate stranglehold. Step one is term limits.”

Steyer also offered up his ideas on how the Democratic party can win the general election.

“The way we are going to beat Trump in November of 2020 is we have to pull together the wonderfully diverse Democratic Party, and that means everyone,” he said. “That means black people, Latinos, Asian Americans, Native Americans and white people. Everybody has to show up together. We need a candidate who can do that and we also need a candidate who can keep this party together. We have a big tent. I don’t want us to be Republican-light. I don’t want somebody running who says they know how to get along with Republicans. Nobody knows how to get along with Republicans. Their idea of a compromise is, ‘you do it my way and we’re good.’ That’s not a compromise.”

During the question-and-answer portion of the event, one attendee asked Steyer his thoughts on gun control.

His reply was that one of the first pieces of legislation would address background checks for gun buyers.

As he closed his remarks, Steyer spoke about what’s ahead for his campaign as he heads to South Carolina on Saturday, Feb. 29.

“South Carolina is not a caucus state but a primary state,” he said. “A poll that came out that had me at 20 percent in South Carolina. I told you I was an outsider, I told you that people are pushing back. I’m asking you to help me do this, to caucus on Saturday, and to show up and to take back the country for the people who are the outsiders. The people in Washington, D.C. are not going to invite you guys to their cocktail parties. We need to stand up for ourselves. That is the truth, but it hasn’t been happening. I have to do it in 2020 or we will bear a terrible price. Let us win on Saturday and let us win in November.”

Following his campaign speech, Steyer took time to personally chat with and pose for photos with those in attendance.