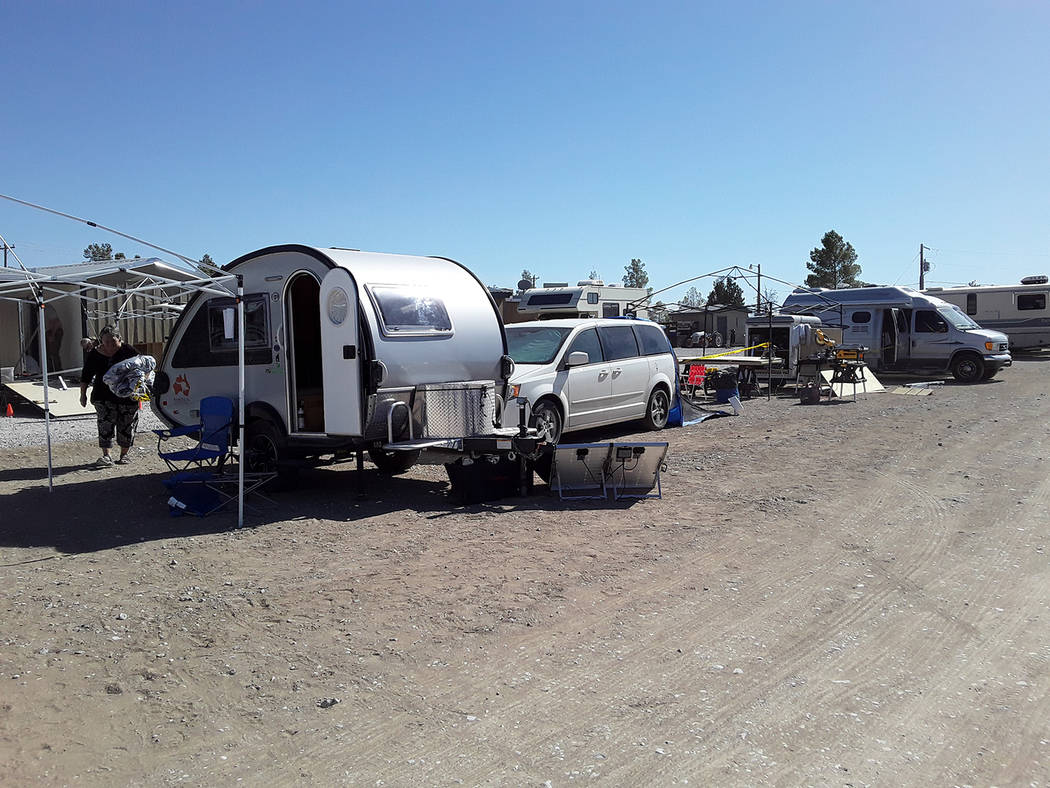 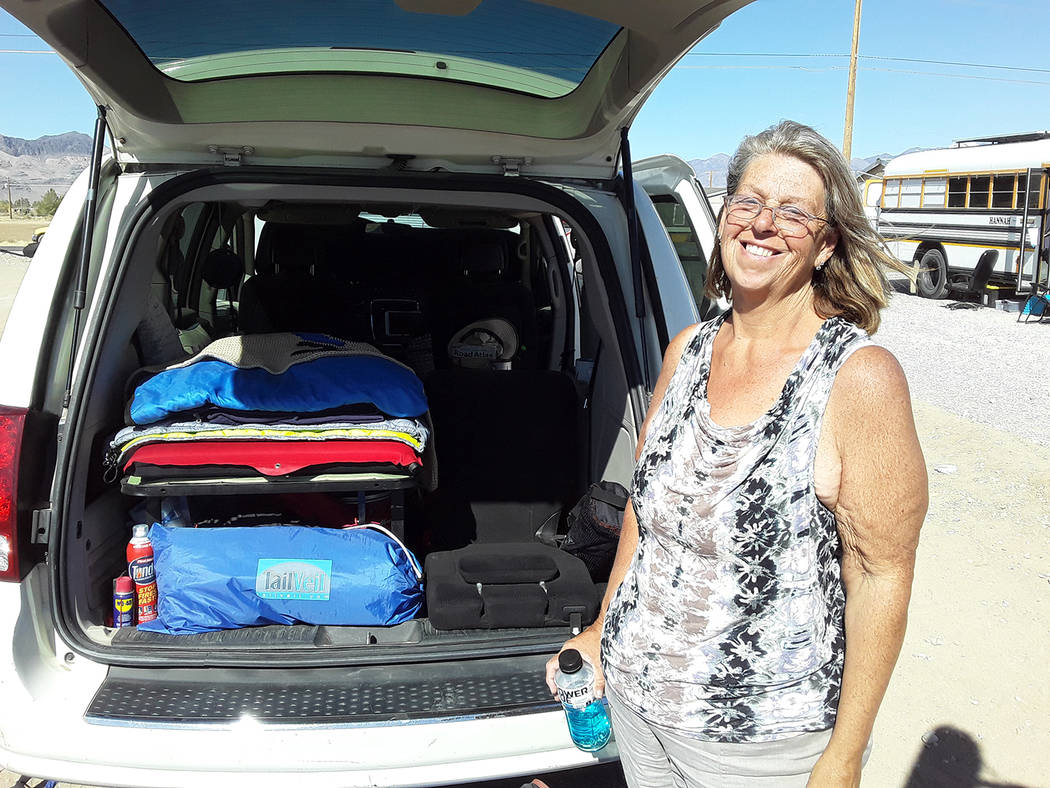 Selwyn Harris/Pahrump Valley Times As a self-described minimalist, a woman identified as Lesa grew up in Maine. She said the nomad lifestyle brought her out West. "I lived in a van for the first time back in 1978," she noted. 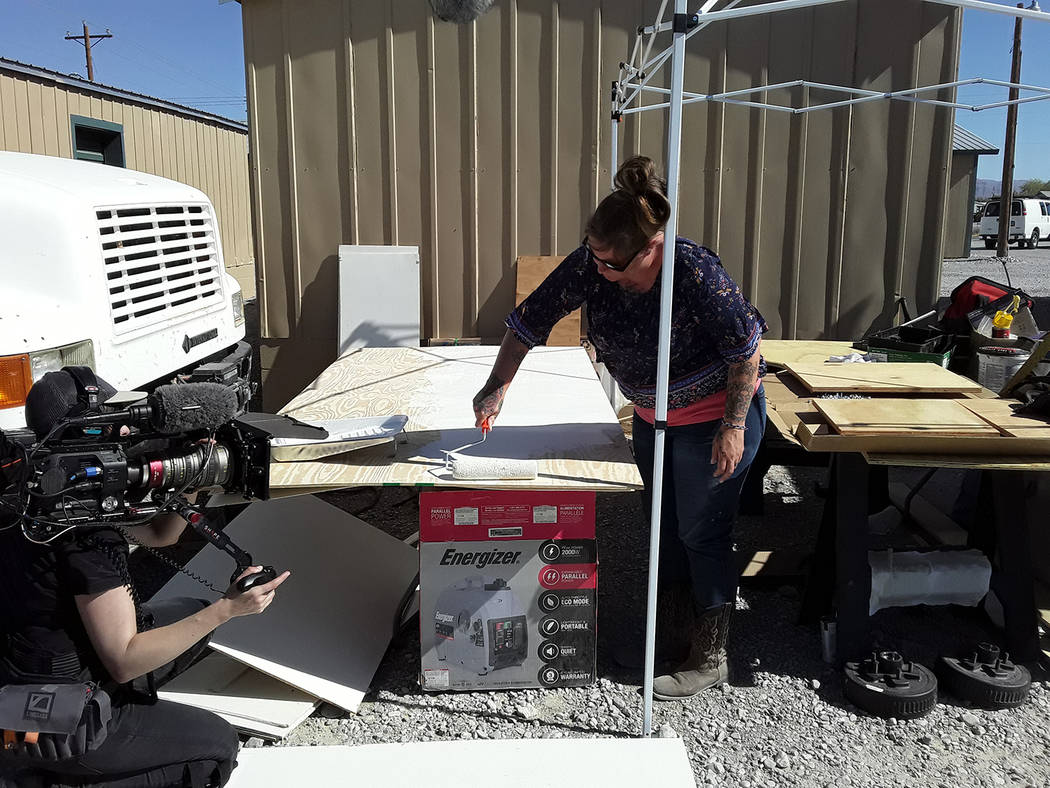 Selwyn Harris/Pahrump Valley Times A nomad volunteer applies paint to what will eventually become cabinetry for a home on wheels, as a documentary film crew captures her work.

With no real bona fide homeless shelter established in the Pahrump Valley, a local non-profit agency has come up with a novel method to provide shelter to those with little to no alternatives.

Homes on Wheels Alliance is a 501(c)3 organization dedicated to helping families and individuals who are living with little to no shelter.

Essentially, the organization converts vehicles into small, but livable homes, by way of volunteers, also known as “nomads.”

Homes on Wheels president and self-described nomad Bob Wells said he came up with the idea several years after creating a website about living and traveling in vans more than 10 years ago.

“I started the website in 2005, then in 2008 when the economy collapsed, my website exploded, because people were losing their jobs,” he said. “They were also losing their homes and they had nowhere to go. They contacted me on Google, and I have been aware since then that there is a real need. There are people who do it because it’s such an enjoyable way to live a life of freedom, but there is a segment of the population who are forced to. Almost all of them find that they love it and they are glad they are doing it, but many are forced into it.”

Last month the alliance held a “build-out” project off of Leslie Street, where nomad volunteers embarked on converting vans and other large vehicles into livable, but modest shelters.

A film crew was also on hand to document the multi-day event.

Nomad Jann Webb is originally from Texas, where the 68-year-old she said she spent the last two years in Lubbock, taking care of her father.

“He died and my daughter that I used to take care of is now married so I’m finally getting to live a life for me,” she said. “I am seeing parts of the United States that I’ve never seen before. I am in love with the desert and the mountains, and I’ve been all over the place. I love the nomad lifestyle, because there is so much freedom with this lifestyle. You don’t have all the bills.”

Homes on Wheels Executive Director Sueanne Carlson noted that those seeking assistance from the agency must go through a thorough vetting process, which begins with filling out an application.

“It is a fairly extensive application,” she said. “They provide the information, such as insurance, and their yearly budget. We want people that both need a vehicle, and they should have enough money to also support that vehicle, because we know that they break down from time to time. The vetting process takes all of that into consideration. The other thing that we do is to make sure that they are made for the nomad lifestyle. We are talking about camping full time.”

Additionally, Carlson said the agency, due to its non-profit status, Homes on Wheels relies primarily on donations.

“We are a conduit of sorts,” she said. “People will donate their vehicles and we will build them out and forward them on to someone in need. We make sure that everything adds up. We have purchased several vehicles. A big part of this is all about community. We really try to help each other. We are giving out 40 solar panel kits so that they can charge their refrigerator, their electronics and things like that. We bring people together to travel together and we have a large gathering once in the winter.”

Regarding what all goes into repurposing a vehicle into a home on wheels, Wells said it all depends on what kinds of accessories the occupant desires.

“We basically build them a bed and cabinets, and we will also put solar panels on the roofs so they have electricity,” he said. “For your bathroom, we just do a kind of workaround. Just imagine that you were going camping and you’re in a tent. Basically that’s what we’re doing. We have a van here that we are building out for a person who is basically a minimalist. She wants nothing in it except for the bed and that was really easy. It was done in a day. With the other ones, we are putting in the bed, the shelving, and the solar. We can do a van in two weeks.”

The minimalist Wells was referring to is a woman whose first name is Lesa, the new owner of a converted minivan.

“I’m a minimalist because I don’t require very much,” she said. “They are starting to call me an extreme minimalist and that’s okay. I grew up in Maine and the nomad lifestyle got me out here. I lived in a van for the first time back in 1978. You can call me a traveler, because my ex-husband didn’t like to pay rent and I just didn’t like talking to the landlord all the time. I finally said the hippies do it, so I’ve been a part of this community since 2005.”

Webb, meanwhile, noted that the solar panels on her panel van have made the nomad lifestyle much more bearable, especially during summertime in Southern Nevada.

“I have 800 watts of solar in my panel van so I can run a small air conditioner,” she said. “During the summertime, we try to stay where the temperatures are cooler. We don’t have to travel really far, we just have to travel north, so altitude is key. When you get up in the higher altitude you’re going to be OK. We don’t mind the cold at night because everyone likes to snuggle, right?”

At present, the nomads are camped out at a location off of Leslie Street on the north end of town.

“This is private property and as nomads, we used mail forwarders,” Carlson said. “This is Mail, Messages and More and they are leasing it to us because we have a relationship with them. They forward our mail and they are allowing us to lease this, which is approximately an acre. It’s pretty much open-ended and we have a lease with them. We will have this as long as we need.”

Living on the edge

Wells, meanwhile, noted that though homelessness is a nationwide problem, Homes on Wheels Alliance is currently confined to the west coast.

“It is our intention to become nationwide, because this way of living has really gotten the attention of the media in the past few years,” he noted. “There are movies and documentaries coming out. We aren’t helping the homeless. We are aiming at the grandmother or the grandfather who has eight hundred or thousand dollars a month Social Security payments, and cannot rent a home for that. We are putting them into homes and giving them a community, support and a far higher quality of life at $1,000 a month, than they could ever have living in a home. If they can live that way at all.”