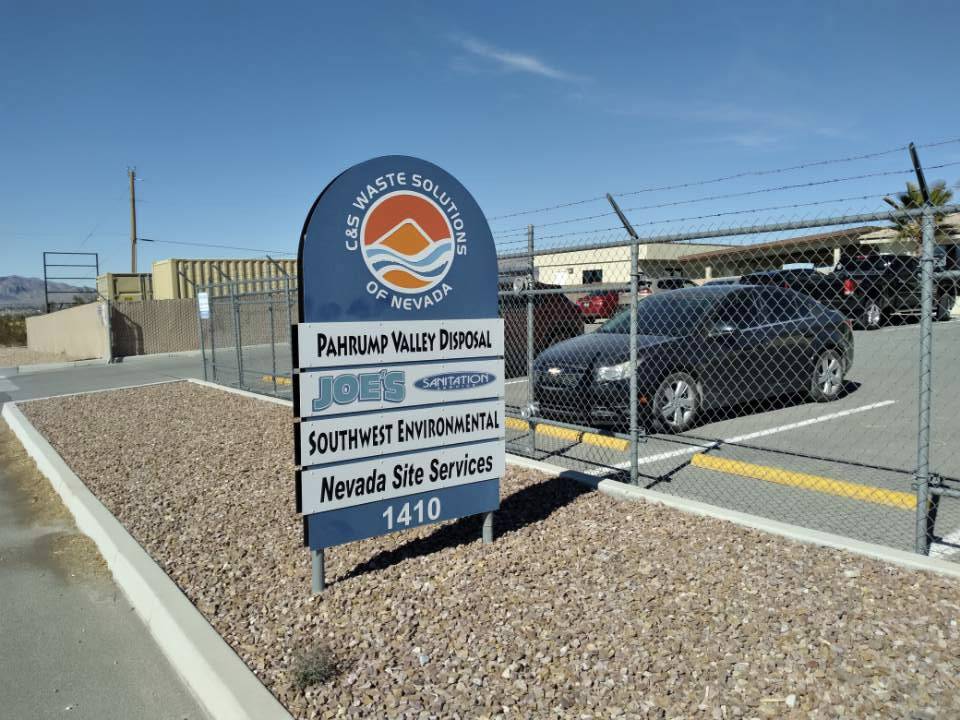 Special to the Pahrump Valley Times Provided in a press release, this image shows the Waste Connections logo. The company recently purchased Pahrump Valley Disposal but that sale will not result in any major changes, both companies have assured the community.

During its Tuesday, Aug. 17 meeting, the Nye County Commission addressed a series of agenda items related to the transfer of solid waste franchise agreements with the towns of Pahrump, Beatty and Amargosa following the sale of longtime local company Pahrump Valley Disposal to Waste Connections, Inc.

“As you know, we recently made the difficult decision to sell our company and we’re here today to introduce Waste Connections and their qualifications and to request the board’s consent to the change of control of Pahrump Valley Disposal pursuant to the solid waste franchise agreement,” Pahrump Valley Disposal President John Shea told commissioners.

“For the past 24 years it has been an honor to work with Nye County and the towns of Pahrump, Beatty and Amargosa,” Shea stated. “We’ve worked hard building a solid waste program and the associated infrastructure to serve these communities throughout the foreseeable future. We’re proud of what we have accomplished in that time and the team we’ve built. We’re really proud of the employees and how hard they work day-in and day-out to service our customers.”

However, Shea said the solid waste industry is changing and the challenges that Pahrump Valley Disposal has been seeing as a result prompted the decision to sell the company. Waste Connections comes with the capital necessary to run the business, Shea remarked.

“So after much consideration, we’ve come to the determination that Waste Connections is the company that’s the best fit and that’s the only company, really, that we felt comfortable working with that would carry on our culture and the business practices in the manner that we’ve created and built over the last 24 years. Our name will not change, but our depth and capabilities will and we believe that this shift will be beneficial today and well into the future,” Shea said. “But one of the things that was most important to us was that their business culture aligns with ours. Not only do they have a proven track record as an industry leader, but they have a proven commitment to staying local.”

Shea said the operations will be unchanged, with the name, local decisions, office location and staff all remaining the same. “And most importantly, they have the same strong commitment to the communities they serve and their strong belief of how important it is to give back and be good community partners,” Shea added.

Sue Vandelinder from Waste Connections was also in attendance that afternoon and she reiterated much of what Shea had said, remarking that Pahrump Valley Disposal will seamlessly maintain its operations. “There are more resources at a regional or corporate level to help out in a time of need. Certainly you will see my face around but other than that, nothing really changes,” she explained. “Mike Smith (general manager of Pahrump Valley Disposal) and his team do a fantastic job in this community and we expect the same going forward.”

Vandelinder said there may be minor changes made, such as the possibility of providing customers with the ability to pay their bills online in the future, but otherwise, everything will be very much status quo, including the philanthropic work that Pahrump Valley Disposal has become so well known for over the past 24 years.

All four of the agenda items regarding the sale of Pahrump Valley Disposal to Waste Connections passed unanimously.

For more information on Waste Connections see the Nye County Commission’s Aug. 17 agenda. A detailed presentation on the company’s operational and financial ability to carry out the terms of the solid waste franchise agreements with Pahrump, Beatty and Amargosa is included with agenda item #44. More information can also be found online at www.wasteconnections.com