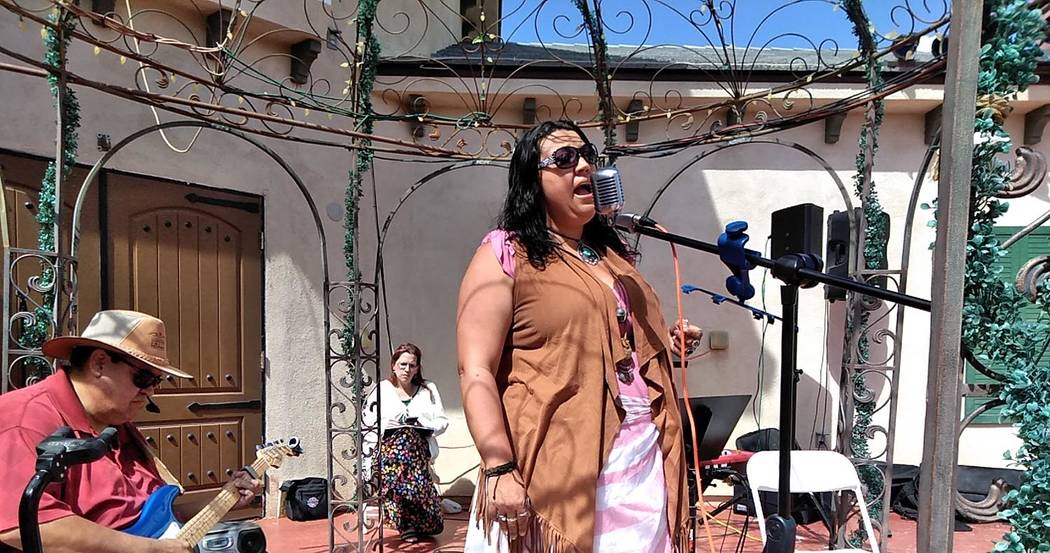 Selwyn Harris/Pahrump Valley Times Tiffany Seeback, front and center, is lead singer for Pahrump's "No Pressure" trio. Seeback is joined by her parents George and Denise Gholson on stage for Sunday's fundraiser at Sanders Family Winery. Other performers at the event included vocalists Rita Jones and Ginger Forbes.

Despite a modest turnout, Sunday’s fundraiser for Pahrump’s R.E.A.D. organization brought forth high spirits throughout the afternoon at Sanders Family Winery on Kellogg Road.

The event entitled, “There is Music in the Air,” provided live music, raffles and drawings.

She noted that locally, there is not much by way of services for those who are stricken with ocular issues.

“We plan on holding regular meetings starting next month,” Joyner said. “We have been in touch with the Pahrump Senior Center and they are going to provide a room for us. In June, we will start an activities program. The staff at the senior center are really good people and they are working with us. We are happy that they are trying to do something positive for us.”

Joyner also spoke about those who are forced to face blindness and visual impairment all alone.

“There are many people who are both isolated and confined,” she said. “It’s unfortunate because they lose their independence. If they lose their driver’s license, they must depend on others to get around. They sometimes become bitter and angry.”

Additionally, Joyner said what was once a simple daily task, can become quite complicated and burdensome without sight.

“Each morning you may take a shower, get dressed, and eat breakfast,” she noted. “What if you have no one to help you organize your clothes? Your bathroom and shower should have items that are easily identified. If you manage to shower and get dressed, your next task is breakfast. Can you see around to fix breakfast or do you have to use your hands to feel items that you want for breakfast? Do you cook breakfast or just have cold cereal? Do you have a place to go after breakfast? Is someone picking you up?”

Regarding getting safely from point “A” to point “B,” and back again, Joyner said the R.E.A.D organization is hoping to get the ball rolling on that angle, in due time.