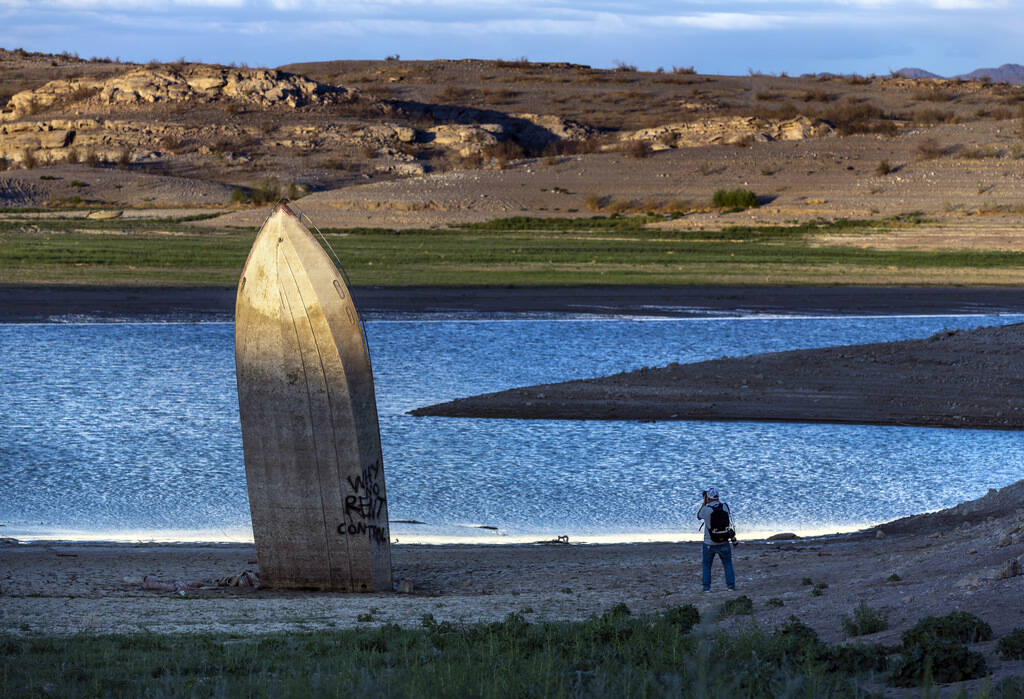 Photographer Mario Tama makes images as the late-day light illuminates a boat is stuck straight up along the shoreline as water levels continue to drop at the Lake Mead National Recreation Area on Thursday, June 23, 2022, in Boulder City. (L.E. Baskow/Las Vegas Review-Journal) @Left_Eye_Images 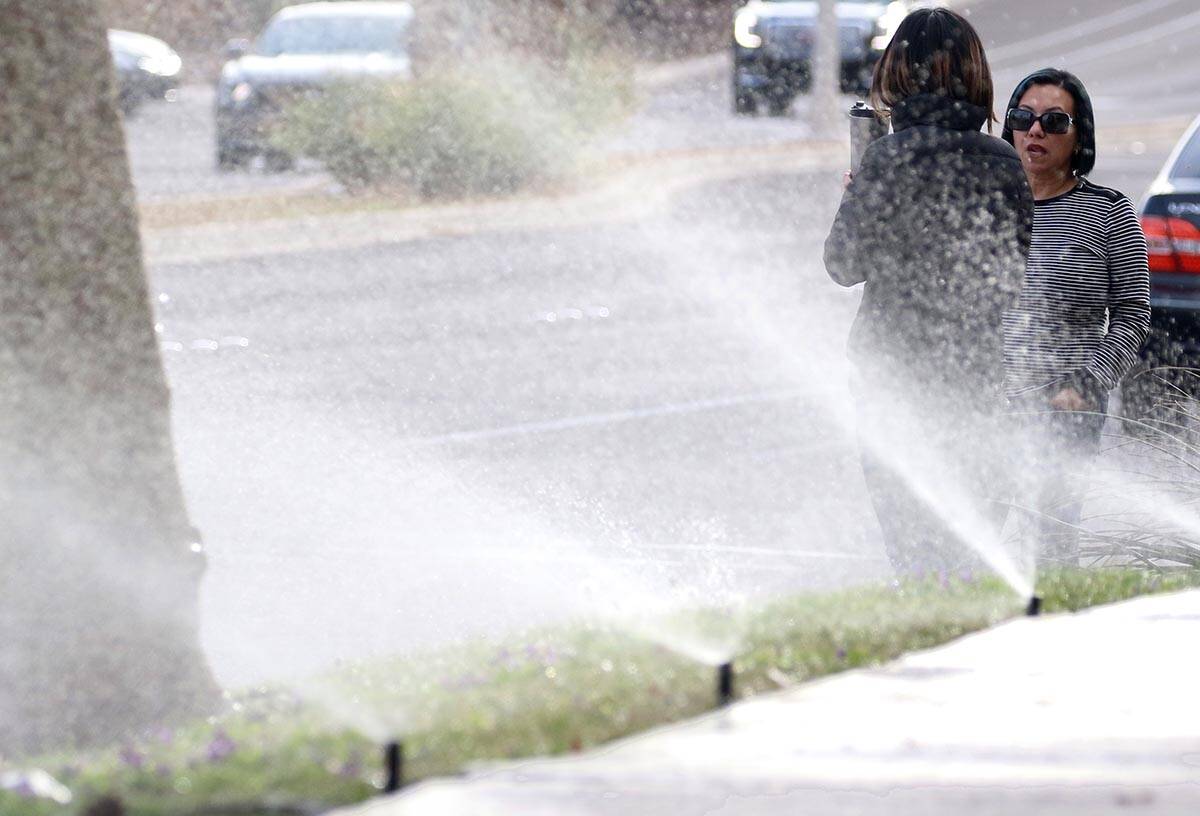 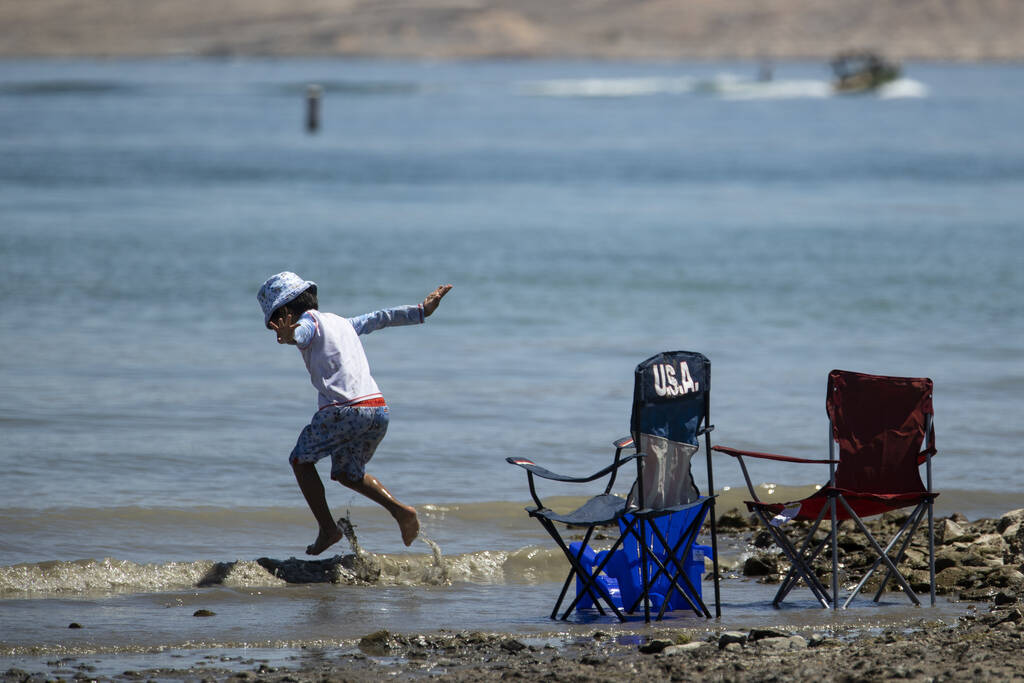 A child jumps in the water at Lake Mead near Las Vegas, Monday, May 30, 2022. (Erik Verduzco / Las Vegas Review-Journal) 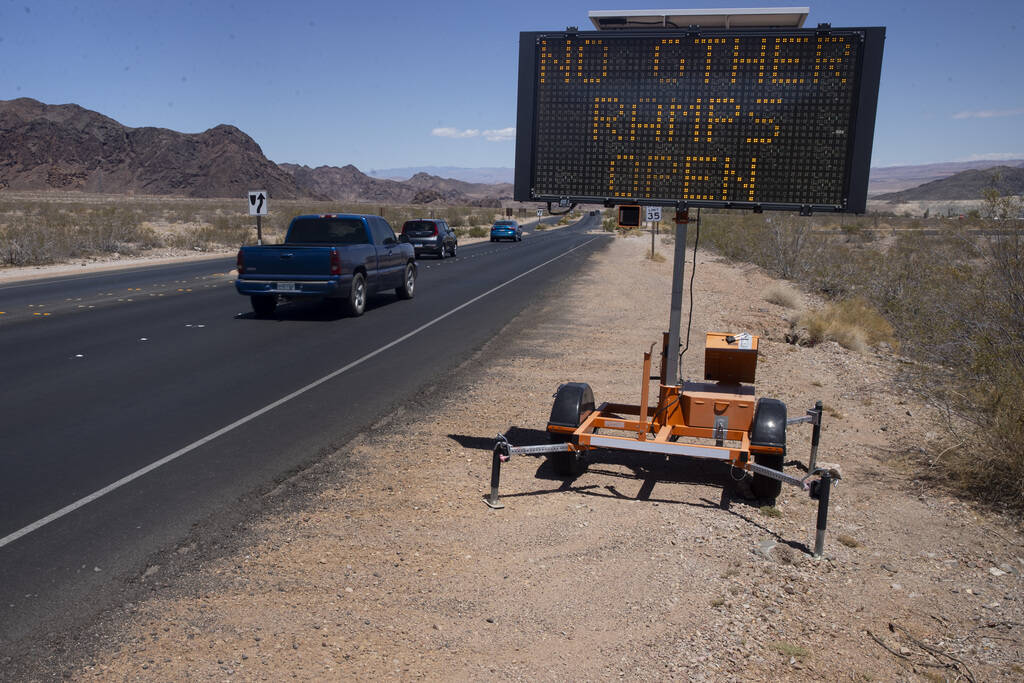 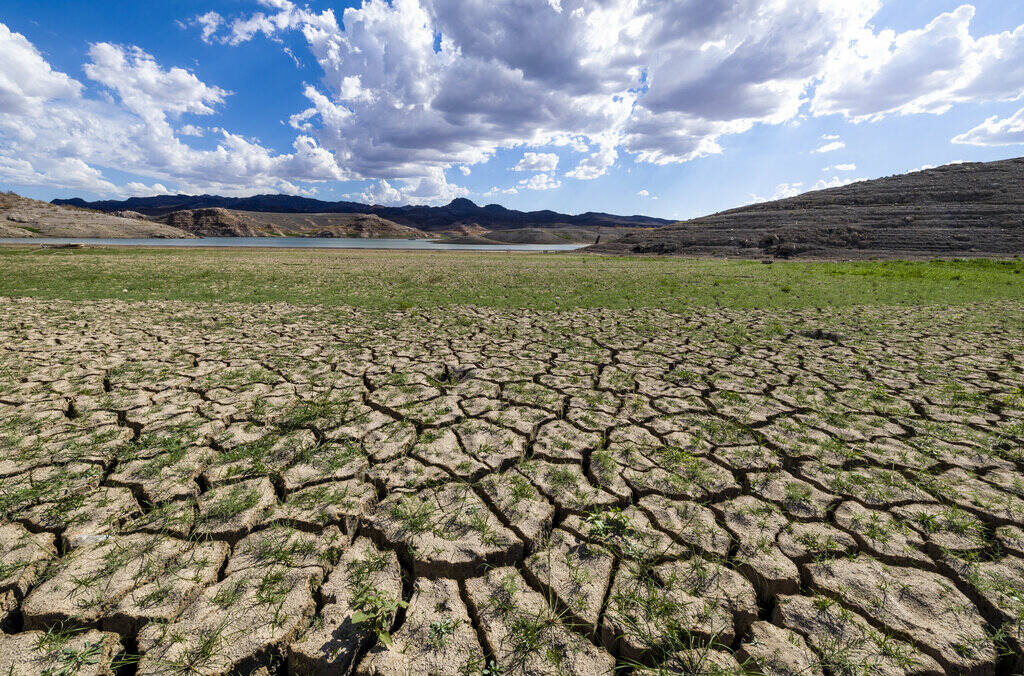 The congressional testimony was stark, but not exactly a surprise to most Southern Nevadans.

Lake Mead has been part of our landscape for nearly 90 years — and its “bathtub rings” are a growing concern.

“What has been a slow-motion train wreck for 20 years is accelerating, and the moment of reckoning is near,” Southern Nevada Water Authority General Manager John Entsminger testified recently to the Senate Committee on Energy and Natural Resources.

As of Thursday afternoon, Lake Mead has dropped to 1,043.14 feet above sea level. That is down nearly 5 feet from a month ago, about 25 feet from a year ago and almost exactly 50 feet from two years ago.

And that is bringing long-sunken objects to the surface, including a World War II-era landing craft.

One reason for the rapid decline: Federal officials announced in May that they would hold back 480,000 acre-feet in Lake Powell that normally would flow into Lake Mead.

However, the decline has slowed. During the last week of June, the water level dropped about 7 inches. During April and May, it had been dropping about 16 to 20 inches a week.

The Bureau of Reclamation said the slowdown is because water from Lake Powell is arriving in Lake Mead and because of a slightly reduced demand for irrigation.

Nevada’s water supply is not going away soon. The state has about eight average years’ worth of unused water allotments stored in aquifers in Nevada and Arizona as well as in Lake Mead.

Water officials were thinking ahead, having witnessed the lake’s steady decline since before the turn of the century.

Other states also have previously unused water stored in Lake Mead and aquifers. And the Bureau of Reclamation has established criteria for when a state can access these “intentionally created surpluses.”

If the lake continues to decline, that water is likely to be used by one or more states sooner rather than later.

In mid-June, Bureau of Reclamation Commissioner Camille Touton asked the seven states that use the Colorado River to come up with a plan within 60 days to reduce their use by between 2 million and 4 million acre-feet. If an agreement is not reached, she said, the Interior Department would enforce cutbacks.

When asked for a more specific timeline this week, Michelle Helms, spokeswoman for the Lower Colorado Basin of the Bureau of Reclamation, said, “The commissioner said 60 days. We’re still in that window and we are continuing to engage with the states and Mexico.”

But Sarah Porter, director of the Kyl Center for Water Policy at Arizona State University, said coming up with a unified plan is a tough order.

“It will be extremely hard for seven states to come up with a consensus on making 4 million acre-feet of water cuts,” Porter said. “I think it’s been made clear if the states don’t come up with a plan that the federal government is going to take action.”

She also said farmers will have to make drastic cuts. Even if municipal users lowered their usage by half, “that would only be about 250,000 acre-feet” of cutbacks.

“It’s like we are climbing up a mountain and it’s getting steeper and steeper,” Porter said.

While some properties unknowingly let water flow into the street or sidewalks and more may not follow the rules rigidly, all valley communities are making unprecedented efforts this summer to find water waste and educate violators.

Another significant conservation step is a few years away.

A state law that will take effect in 2027 will make it illegal to use Colorado River water to irrigate non-functional grass.

Properties such as HOAs, apartments, condominiums and townhouses “need to begin taking an assessment of the non-functional grass and begin the process to convert to drip-irrigated landscape or some other type,” Mack said.

The SNWA has said the ornamental grass measure would save about 30,000 acre-feet each year, or 10 percent of the valley’s total water allocation.

5. Issues outside of Nevada

Some of the bigger water use issues are playing out in other states that use the Colorado River.

California has nearly a dozen desalination plants making Pacific Ocean water safe for drinking. However, the California Coastal Commission recently rejected a proposal for another desalination plant in Huntington Beach. The plants are costly, and turning saltwater into drinking water is very expensive.

Mack said the SNWA supports desalination and is even willing to help pay some of the cost of plants. In exchange, Nevada would get some of California’s annual water allotment.

“Necessity becomes the mother of invention,” he said. “There are a lot of hurdles that need to be overcome.”

There’s also the issue of farming. In noting that 80 percent of the Lake Mead’s water is used for agriculture, Entsminger told the Senate committee, “I’m not suggesting that farmers stop farming, but rather that they carefully consider crop selections and make the investments needed to optimize irrigation efficiency.”

In another venture, the SNWA has reached the first stage of an agreement with the Metropolitan Water District of Southern California on a large-scale water recycling program.

Under the program, Southern California would replenish and retreat its waste water to a higher level of cleanliness and pump it into an aquifer for future use, Mack said. Much of Los Angeles’ waste water is dumped in the Pacific.

“The benefit for Southern Nevadans is that for its investment, we could get a bigger share of the Colorado River supply in a water trade,” he said, noting that the $1.3 billion investment in the “third straw” at Lake Mead and the low river pumping station make such water trades possible.