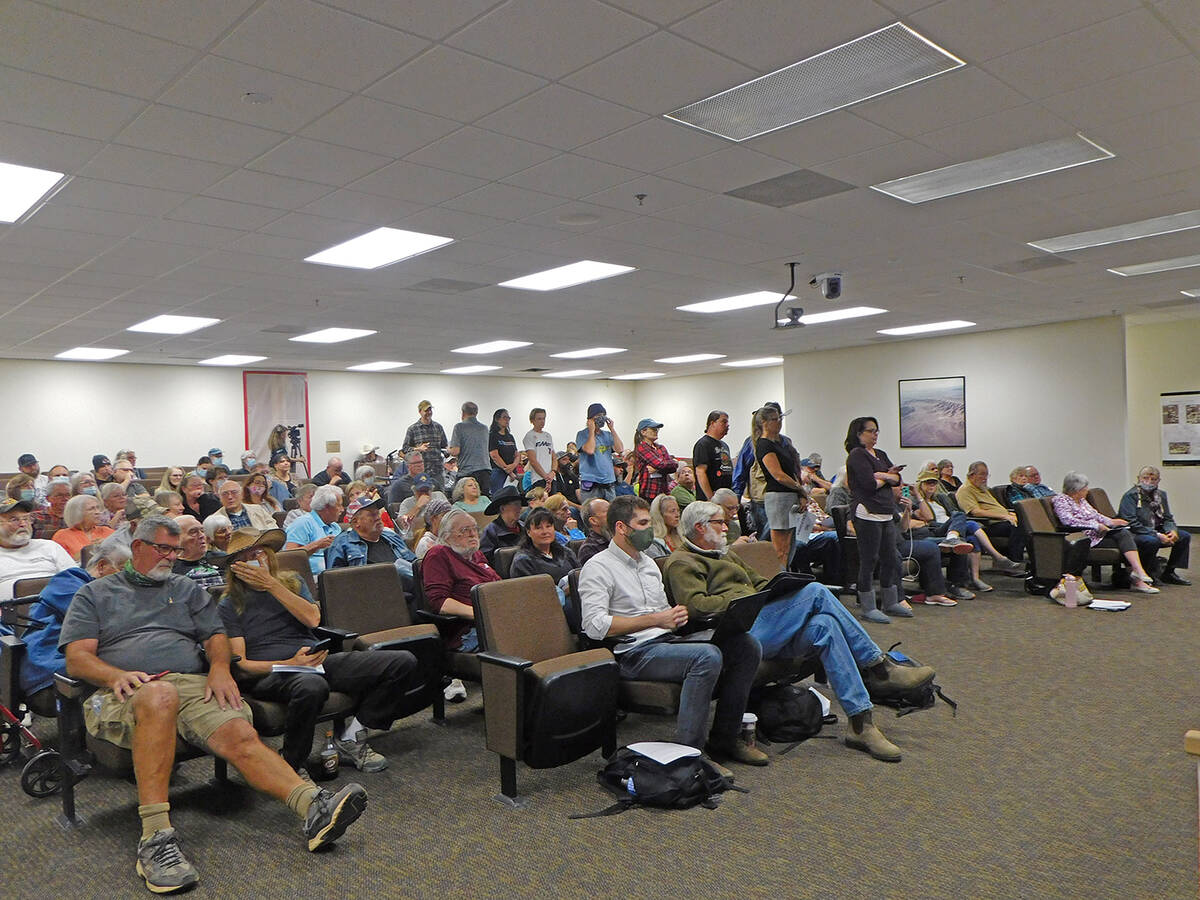 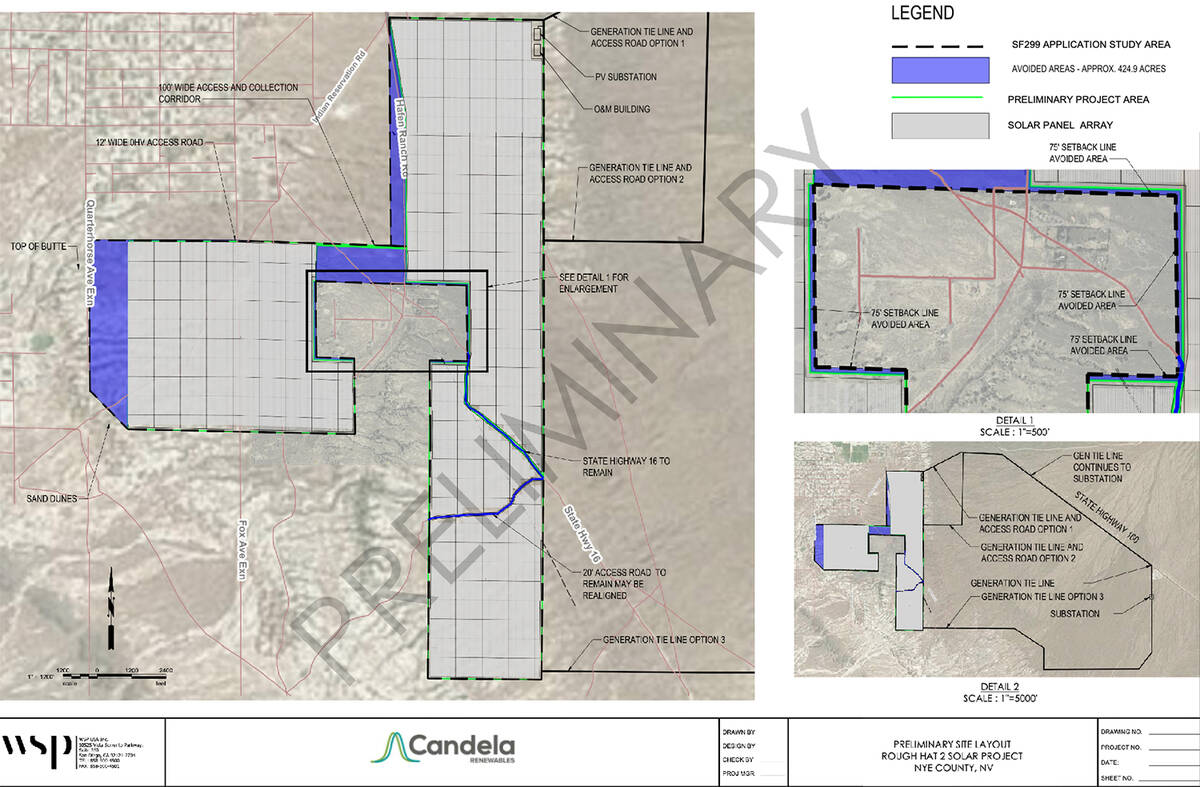 Special to the Pahrump Valley Times Included in the backup for the Pahrump Public Lands Advisory Committee's Nov. 9 meeting was this map, created by Candela Renewables and showing the borders of its proposed Rough Hat solar field. 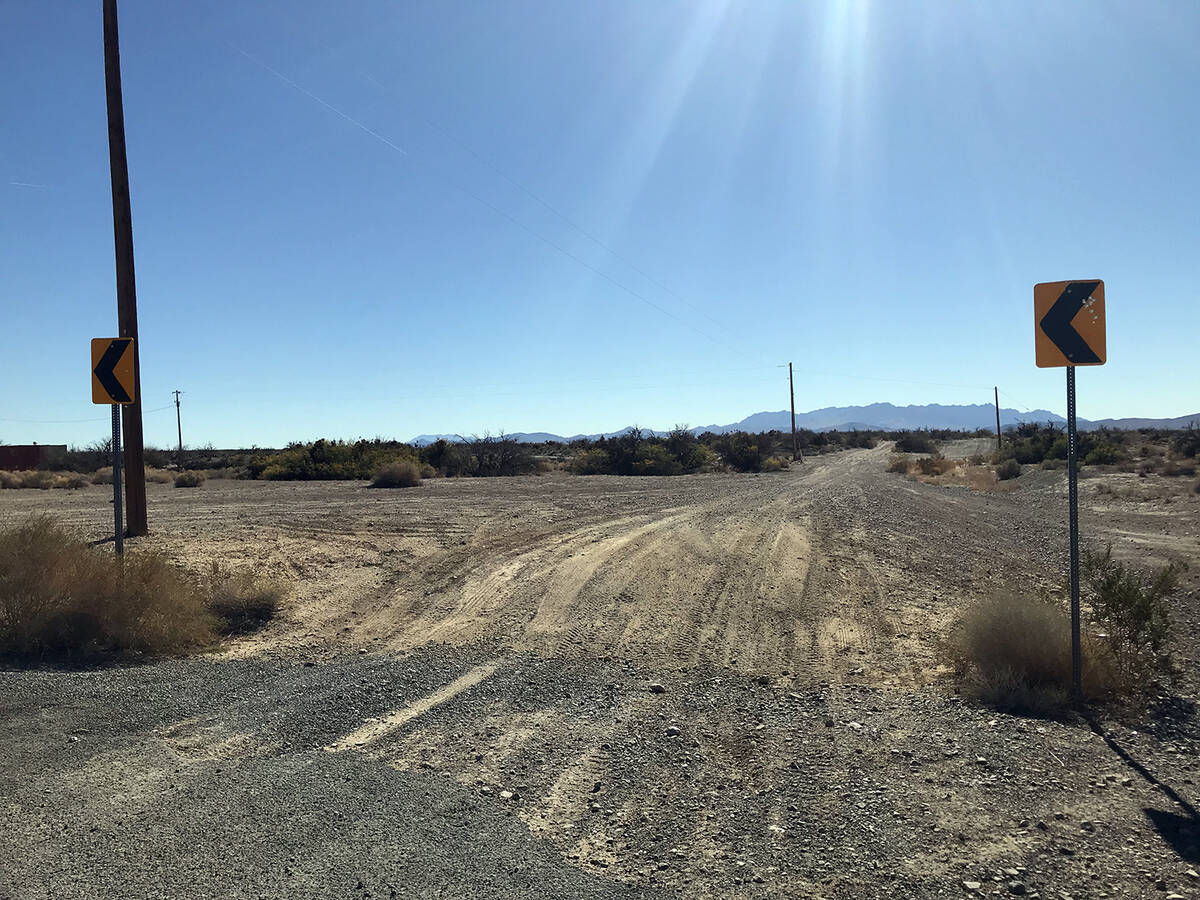 Robin Hebrock/Pahrump Valley Times Candela Renewables has been working to alleviate concerns from residents about its Rough Hat project and has decided to maintain this public lands access point, located at the far end of Quarter Horse Avenue. 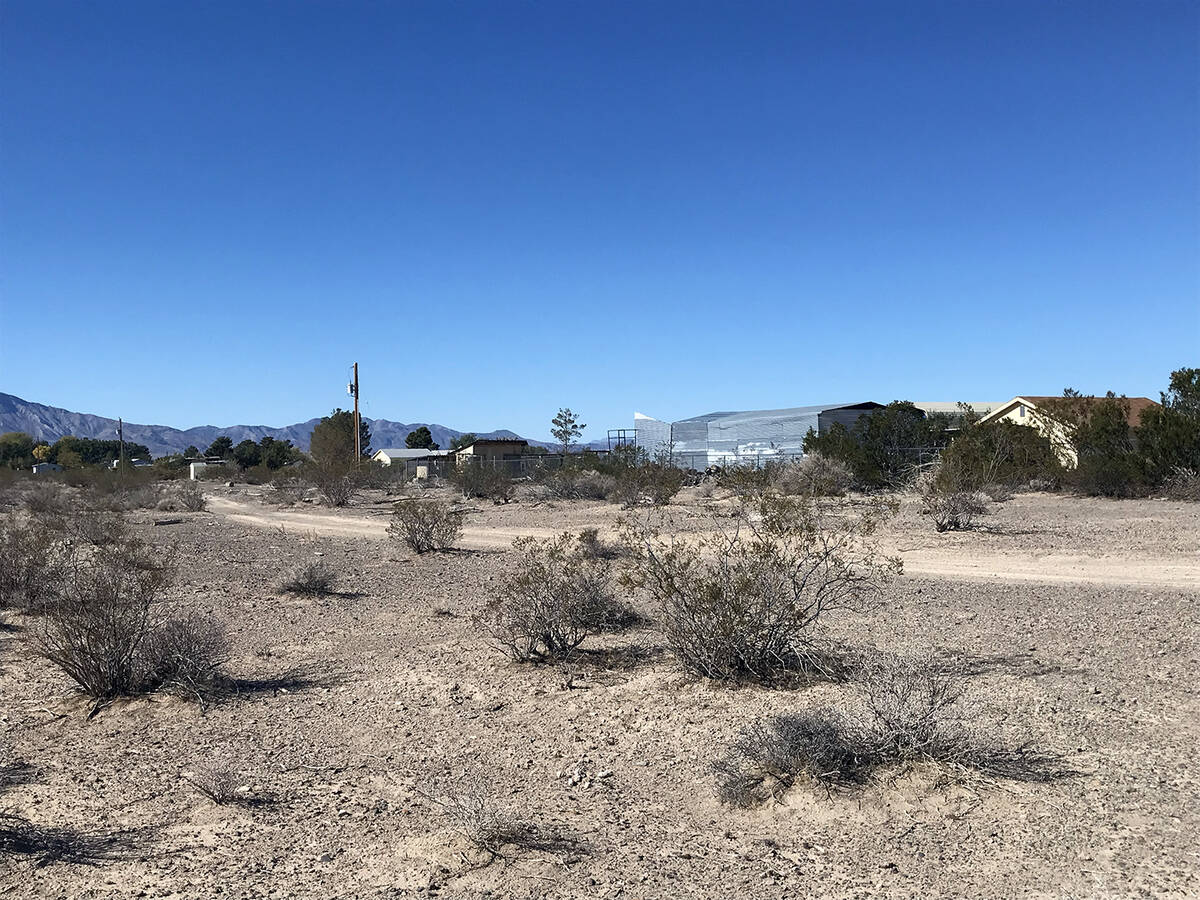 Robin Hebrock/Pahrump Valley Times This photo shows the backside of a section of houses located on Martin Avenue which would be roughly 1,000 feet away from the perimeter fence that would enclose the proposed Rough Hat Nye County Solar Project.

Officials with Candela Renewables, the company proposing the Rough Hat Nye County Solar Project, were in the Pahrump Valley this week for a presentation before the Pahrump Public Lands Advisory Committee and this meeting drew an even larger crowd than the last in which this project was discussed, with upward of 100 residents filling the Nye County commission chambers to make their opposition to the project clear.

Dewey Klurfield, developer with Candela Renewables, kicked off the Tuesday, Nov. 9 presentation by pulling up a map the company had created, giving a more definitive outline of the boundaries of the proposed Rough Hat solar field.

Previously, residents had only a map developed by the Bureau of Land Management to reference and this did not include enough detail to give a true idea of just how close the solar field would be to the town’s outlying residential streets. The new map, however, labeled several roads and major features of the southeastern end of town and even included shaded portions that Candela had decided, upon discussion with those living in the area, to exclude from its field.

“The map you see here is a similar project outline to what is shown in BLM’s map. However, it incorporates some changes that we have made based on the feedback we’ve received from the public,” Klurfield stated. “The feedback that we received loud and clear from the meetings we had prior to last month’s PLAC (Pahrump Public Lands Advisory Committee) meeting was that two major areas of concern were Top of Butte and Sand Camp.”

Klurfield pointed out that these areas would no longer be impacted by the Rough Hat solar field, with a chunk of blue exclusion zone marked on the far western side of the proposed project footprint. There was a second chunk of the exclusion zone marked in the center of the project, running along Hafen Ranch Road and creating an L shape as it bends toward the west, with Klurfield explaining that this was to preserve the view of those living along that zone. There were two access roads highlighted in blue as well, with these to be preserved through the southern end of the proposed field area. In total, the company had marked about 424 of its 3,400 acres, or just over 12% of the overall footprint, as exclusion zones.

Despite the company’s attempts to assuage concerns by creating these exclusion zones, other details in the map only seemed to engender even more anger from those present at the meeting.

As outlined, the edge of the Rough Hat solar field would border the part of Hafen Ranch Road that runs south from the intersection of Indian Reservation Road and would sit roughly 1,000 feet from the homes on Martin Avenue. In addition, the layout of the proposed solar field would result in one neighborhood, that which includes Carter Lane, Superior Lane, Winston Court, Hilva Avenue, Saif Court, H&S Lane and two small portions of Thorne Drive, being flanked on two sides by solar panels. Further, the map and several photographs included in the Candela presentation depicted precisely what the residents of the town stand to lose in terms of recreational access, with at least one major access point, that at the southern end of Fox Avenue, to be cut off by the solar field’s perimeter fencing.

There was also plenty of concern about the solar field’s proximity to Hafen Elementary School and it was revealed at the Nov. 9 meeting that the northern edge of the field would be just 0.15 miles away from the school, a fact that had many shaking their heads in disbelief.

Klurfield offered some updates on the company’s progress, noting that it has continued with its public outreach and has spoken with about 60 landowners in the area. The company is also working to get together some tax figures to give a definite idea of what the county would gain in terms of tax dollars and is striving to develop a googlemaps-esque program that will give people the ability to look at the project area from a variety of viewpoints. That program should be up and available for the public prior to the December meeting at which Candela is set to present its project to the Nye County Commission.

Once Klurfield was through with his presentation, PLAC members asked several questions, including how many of the company’s projects were in Nevada, how many were in California, what exact features the company looks for when selecting potential sites and what benefit the town would reap from the project. The most pointed question, however, came from PLAC chair Mike Zaman, who asked, “How many of the other ones did you build within a city limit?”

“I don’t know that number off the top of my head,” Klurfield replied, noting that he would work to get that figure to the committee before its next meeting.

Another key question posed concerned the most strained resource in the valley, water. Klurfield explained that during construction, the Rough Hat Nye County project would use around 800 acre-feet of water and once completed, annual operating use would be between five and 20 acre-feet. He noted that as an act of good faith, the company was considering purchasing some water rights to relinquish back to the state as well, as it is well aware of the fact that the valley is highly over-allocated in terms of water rights.

Following board questions, Nye County Commissioner Debra Strickland, who is liaison to the PLAC, put what the entire room seemed to be thinking into words.

“This is not going over well with my community,” Strickland asserted, to the applause of the audience.

“So we need to come to some sort of understanding that we can’t see this right in our backyard,” she continued. “And we are going to get there, we have to get there. Whatever that looks like. Because I want this community to realize that in order for this project to move forward, they have to have a Special Use Permit and they have to have a development agreement, and that has to be approved by the Board of County Commissioners and there are five of us. So we have teeth.”

Public comment was then initiated, opening a floodgate of angst and frustration, with over 30 speakers taking to the microphone, not a single one of whom spoke in favor of the project. Once again, residents, and even those who do not reside in Pahrump, expressed an array of concerns.

There were those who declared that this project would alter the desert landscape irrevocably, impact wildlife and plants native to the area, destroy the desert crust that keeps the soils in place and create was is known as a “heat island” in which temperatures in the area could rise several degrees.

Others spoke about the recreational aspect, with the youngest of the meeting’s speakers, a teenager named Logan Tyler, remarking, “It will become a place I can no longer use. We should think about forever running open spaces just so a few people can make a lot of money by stealing my playground from me and you. And I don’t think the wildlife that lives there feels any better about it than I do.”

Still others honed in on the financial aspect, stating that they were worried that housing prices in the area would drop as a result of being located in such close proximity to a massive solar field and some simply lamented the damage that the project could do to the small-town feel that attracts so many to the town. Concerns about fugitive dust and “valley fever”, an infection caused by fungus that resides in soils in the southwestern United States, were also voiced, leading many to question the health impacts that disturbing the selected lands could have on those that live around the proposed solar field.

Just what would be done with the power that is generated was a source of rancor as well, with residents obviously upset with the likelihood that none of the power would be purchased by Valley Electric Association to the benefit of the community. Candela representatives have previously stated and reiterated once again at the Nov. 9 meeting that it is still too early in the process to have firm power purchase agreements in place so it could not answer questions about where the power would ultimately be used.

At the conclusion of public comment, it seemed clear that those attending the meeting that evening felt it would be best for Candela to work with the Bureau of Land Management on finding other land on which to locate its Rough Hat solar field and many suggested the company look to California instead.

Candela Renewables is doing all it can to address the concerns of the public and Klurfield was quick to emphasize this point.

PLAC will be meeting again on Tuesday, Nov. 30 to discuss and decide upon the recommendations it will be making to the Nye County Commission regarding the Rough Hat Nye County Solar Project.