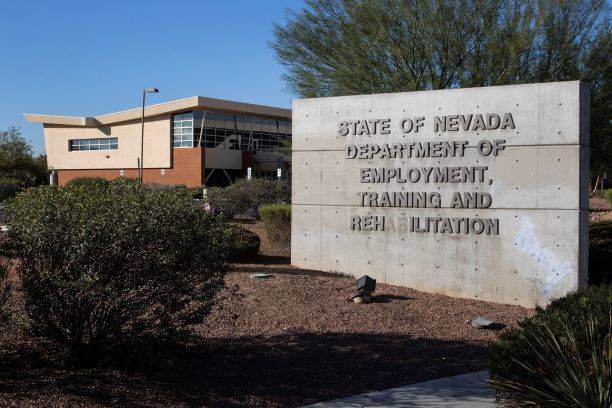 Bizuayehu Tesfaye/Las Vegas Review-Journal The State of Nevada Department of Employment, Training and Rehabilitation Center is photographed, on Nov. 12, 2020, in Las Vegas.

For the week ending Nov. 28, initial claims for unemployment insurance totaled 6,442, down 1,679 claims, or 20.7%, compared to the previous week’s total of 8,121 claims, according to finalized data from the Nevada Department of Employment, Training and Rehabilitation.

Continued claims, which represent the current number of insured unemployed workers filing weekly for unemployment insurance benefits, fell for the 16th consecutive week to 84,633, a decline of 9,510 claims, or 10.1%, from the previous week’s total of 93,873. This decline continues the ongoing trend seen in the regular program over the past several months, with much of the declines because of claimants exhausting their regular unemployment insurance benefits.

Nevada’s Pandemic Emergency Unemployment Compensation program, which currently provides up to 13 weeks of benefits to individuals who have exhausted their regular unemployment benefits, saw 95,860 claims filed in the week, a decline of 105 claims from last week’s total of 95,965.

Nevada’s State Extended Benefit program currently provides up to 20 weeks of benefits to individuals who have exhausted both their regular and PEUC program benefits. Nevada saw 14,832 claims filed in the week, an increase of 1,469 claims from a week ago.

The Pandemic Unemployment Assistance program, which provides benefits for self-employed, 1099 contract workers and gig workers saw 8,345 initial claims filed in the week ending Nov. 28, an increase of 1,047 claims, or 12.5%, from last week’s total of 7,298. Through the week ending Nov. 28, there have been a total of 657,960 PUA initial claims filed.