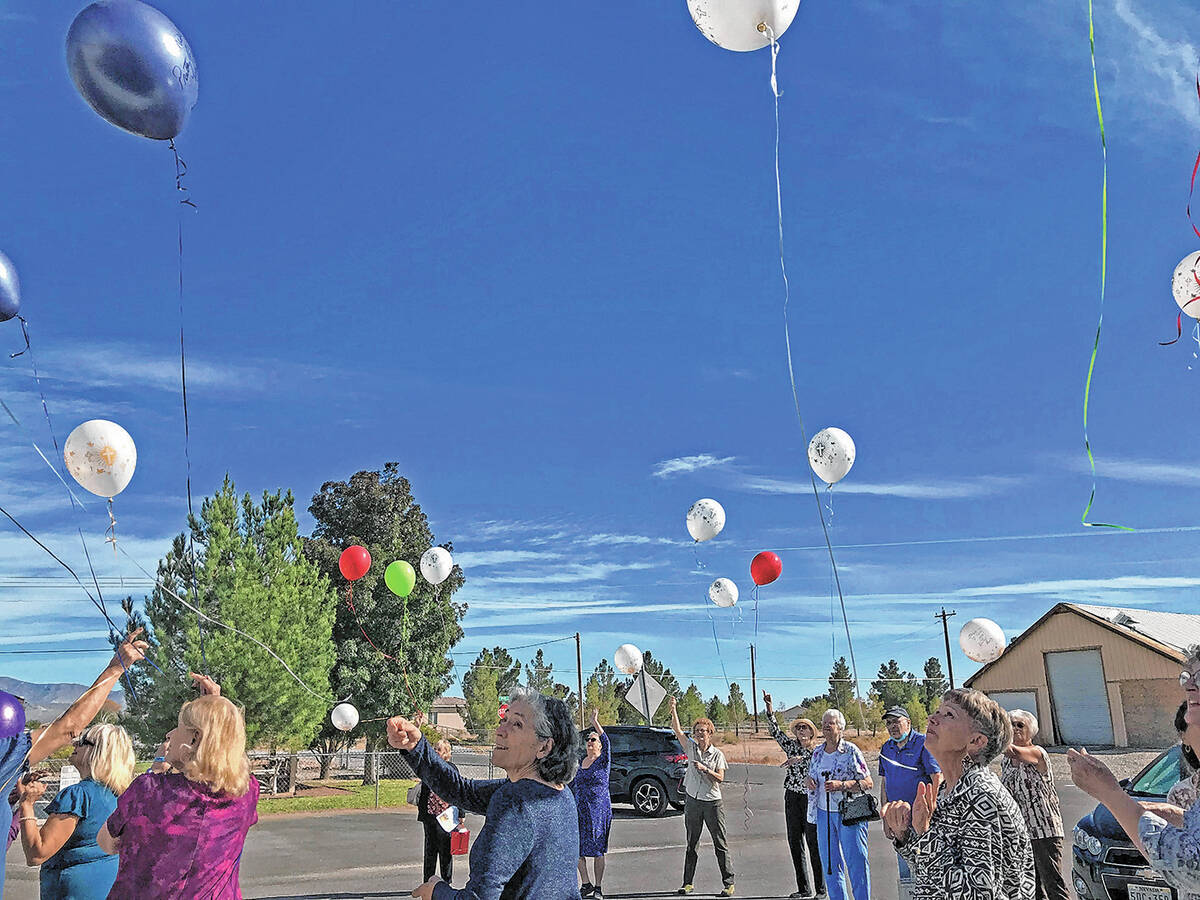 (Special to the Pahrump Valley Times) Snapped at the Oct. 30 Celebration of Life, this photo shows members of GriefShare releasing balloons marked with messages to the loved ones they lost.

COVID-19 has doubled — and even quadrupled — death tolls in some regions of the world. The deaths have many grieving, whether their grief is obvious or not.

“One of the common sayings is ‘I’m fine’,” said Marcia Savage, a coordinator of GriefShare at Central Valley Baptist Church in Pahrump. The support group helps those heal after losing a loved one.

But grief presents itself in many complex ways and Savage sees some obvious signs in those who have lost a loved one.

Often those who are grieving may say they’re “tired all the time,” or that “they’re going crazy and always forgetting things.”

Savage says these signs are normal in the process for sorting out feelings.

“We all go through grief,” she said. “It’s a sad thing because it does happen to everybody eventually.”

Tony Laquidara said he went through GriefShare to help with the loss of three family members in the span of 10 months.

“When you first get here, besides crying, you don’t talk,” Laquidara said. “You listen.”

He realized that he was never alone in his grief — others were suffering too. But he’ll never forget when he lost his wife and he had a celebration of life in an Italian restaurant in Brooklyn with a large portrait of his wife.

During the ceremony, he started to cry and when one of his sisters-in-law came up to ask why he was crying so hard, he thought: “Men don’t cry from Brooklyn.”

She smacked him right across the face and asked him where he got the information.

His sister-in-law made him go to GriefShare.

“When I came here, you know I started crying, all the ladies asked ‘What’s the matter?’” Laquidara said. “Well, where I come from we’re not supposed to cry and everybody started to laugh.”

He believes the organization is the best way to get through grief, where he’s found a community that helps others.

GriefShare is a 13-week Christian-based therapy session that’s offered three times a year. The GriefShare chapter at the Central Valley Baptist Church, located on 3170 S. Blagg Road, was launched in July 2015, by Pete Giordano, who died in 2020.

Since the passing of the group’s founder, Savage has taken over as the lead organizer. Savage was once a part of the program to help with the loss of her first husband.

During the program, participants meet weekly to watch videos and answer questions in a workbook. There’s also discussions. Savage recommends to come at least three times to give the program a chance.

The group has helped more than 200 people who have struggled with grief, Savage estimated.

The chapter will be holding another way to help grieve through a “Loss of a Spouse” program on Saturday, March 19.

On March 26, the group will host a Celebration of Life ceremony with a potluck and balloon launch.

The event runs from noon to 2 p.m. at the church and is open to the public.

Pahrump has two churches with a GriefShare chapter, Central Valley Baptist Church and Calvary Chapel Pahrump Valley. The organization is worldwide and can be found by going to www.griefshare.org and searching by location.