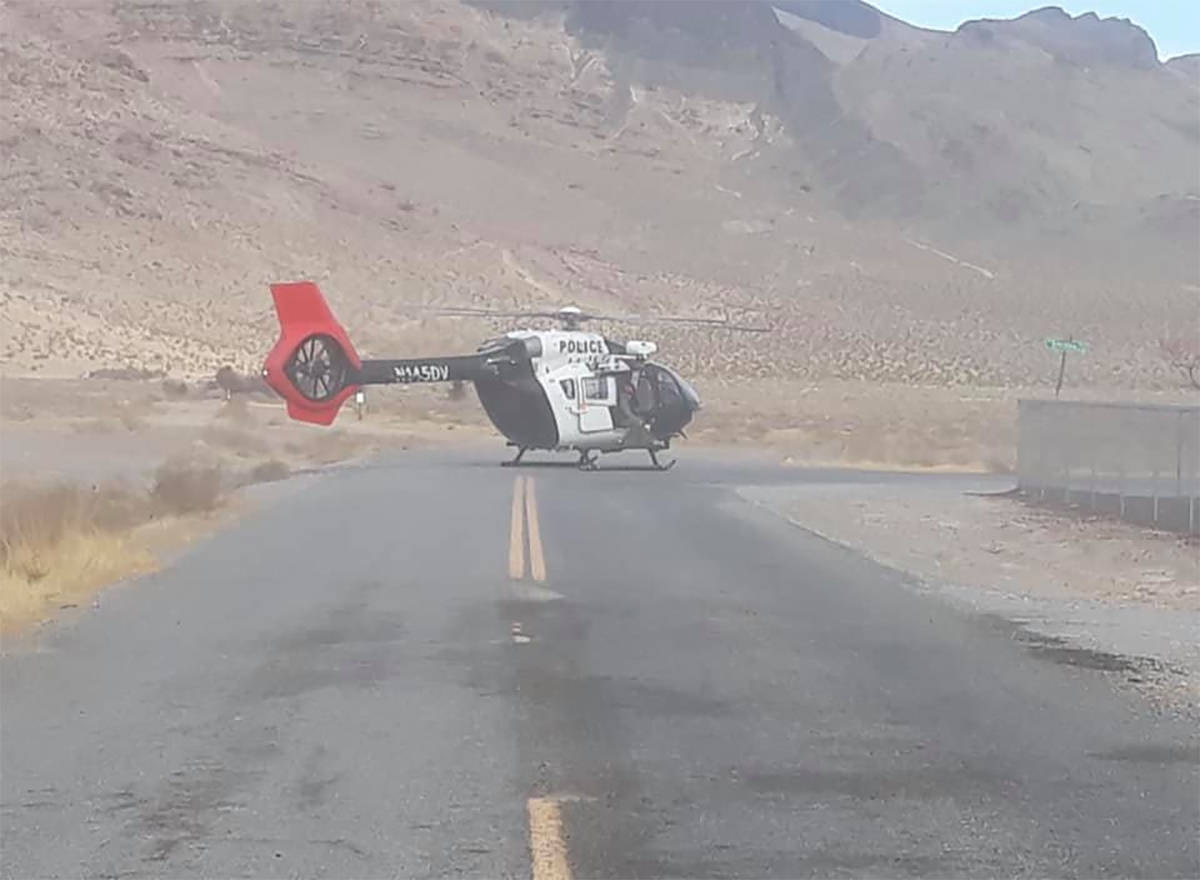 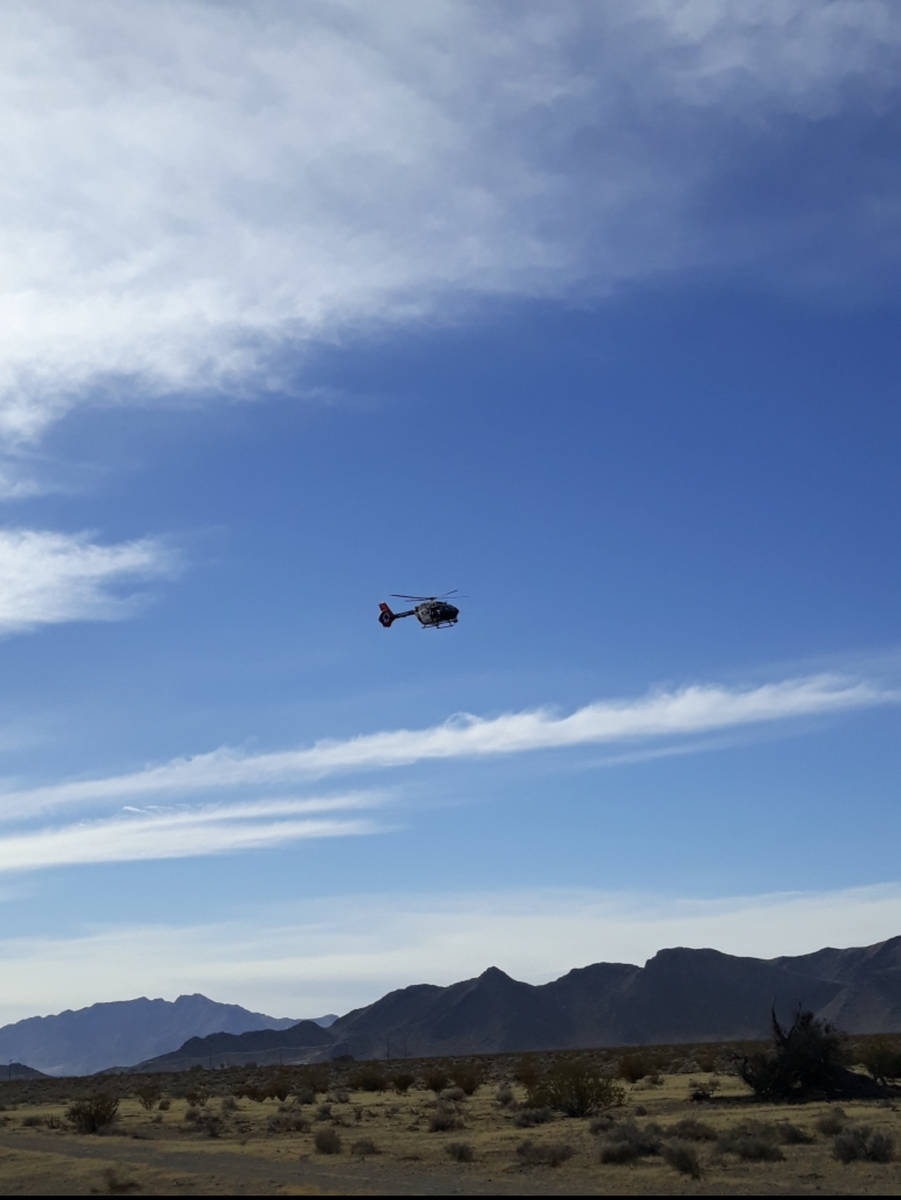 Two hikers were rescued after becoming stranded in the area of Shadow Mountain on the valley’s far northwest end of town, according to the Nye County Sheriff’s Office.

As stated on the sheriff’s office social media page, Nye County Search and Rescue teams were dispatched on the evening of Dec. 6th to locate the stranded adult hikers, after it was reported that the trail they were walking along had somehow collapsed beneath them, effectively trapping the hikers identified as Nic Couturr and Sebastian Fronk, both 18.

It should be noted that overnight low temperatures on Sunday hovered in the upper 20’s, according to the AccuWeather forecast.

The Pahrump Valley Times on Tuesday, spoke to Couturr about the ordeal.

He noted that he and Fronk met up at the base of the mountain and started hiking up at roughly 12:00 p.m.

“It took us about four hours to get where we were,” he said. “While we were going up the right side of the mountain, we were trying to make our way to the left, so we could get to a cave. While we were going, and all of a sudden, all of the rocks started falling behind us. We were freaked out because we were stuck where we were. Sebastian ended up climbing on top of the different areas, and climbing back down to me, because we were trying to find a better way to the cave. I was pretty nervous at the time, but I can’t say I was too scared because I didn’t know that we were stuck until later on. We were looking for a different way around but we couldn’t find one.”

Fortunately, for both, Couturr said he had cell phone service in the area where they were stranded.

“The first person I called was my mom and asked her what I should do,” he said. “She then called my father and they ended up coming off of work and calling Nye County Search and Rescue because I was trying to save the battery in my phone as much as I could. I did let my mom know that we were going hiking, because it’s always good to let somebody know where you are in case you can’t contact anyone.”

Enduring the overnight temperatures, on the mountain was another topic Couturr spoke about.

“We were properly dressed wearing pants and thin hoodies, and we planned on going down later in the day, but things didn’t work out so well, and it was pretty cold up there,” he said. “We ended up starting a fire and went into a small little cave that we found. When we had the fire going, we ended up throwing rocks in there, so when the fire finally went out, we had some heating to keep us going. We didn’t have anything to eat, plus, we ran out of water when the trail failed.”

Though when lost out on a trail, professional hikers advise to stay put until help arrives, but Couturr said he was confident about continuing to seek out a traversable trail.

“I knew where we were, so we did not stay put,” he said. “It’s probably smarter in certain situations, but where we were at first, rocks started falling on our heads because we were on the ledge of a cliff and there was an overhang above us. We thought it was going to collapse, so we decided to shimmy underneath through little cracks in the wall just to get to the other side so we didn’t have a cliff hanging over our heads. It was a bad situation and we think the recent earthquakes caused the rocks to loosen up.”

Help is on the way

The following day, Nye County Search and Rescue crews along with a Las Vegas Metropolitan Police Department helicopter managed to locate both Couturr and Fronk.

“We were overjoyed when we spotted the helicopter because we were exhausted, hungry and tired at that moment,” Couturr said. “We were weak and all we wanted was just to get down, get home and eat something. I really do appreciate search and rescue and the Las Vegas Metropolitan Police Department helicopter for getting us down, because without them, we would probably be still stuck up there. I used to hike a lot with my friends, and we just recently started again, because I haven’t hiked in a long time.”

Not long after both Couturr and Fronk were rescued, the Nye County Sheriff’s Office issued a release regarding the incident.

“After two attempts on two different trails in the dark of night, the search was called off, until day break,” according to the sheriff’s office. “Las Vegas Metro Police Department was requested to assist with their helicopter on Monday morning . Both hikers were rescued uninjured and declined medical attention. Thanks to Search and Rescue for their hours of work and to LVMPD for their assistance.”