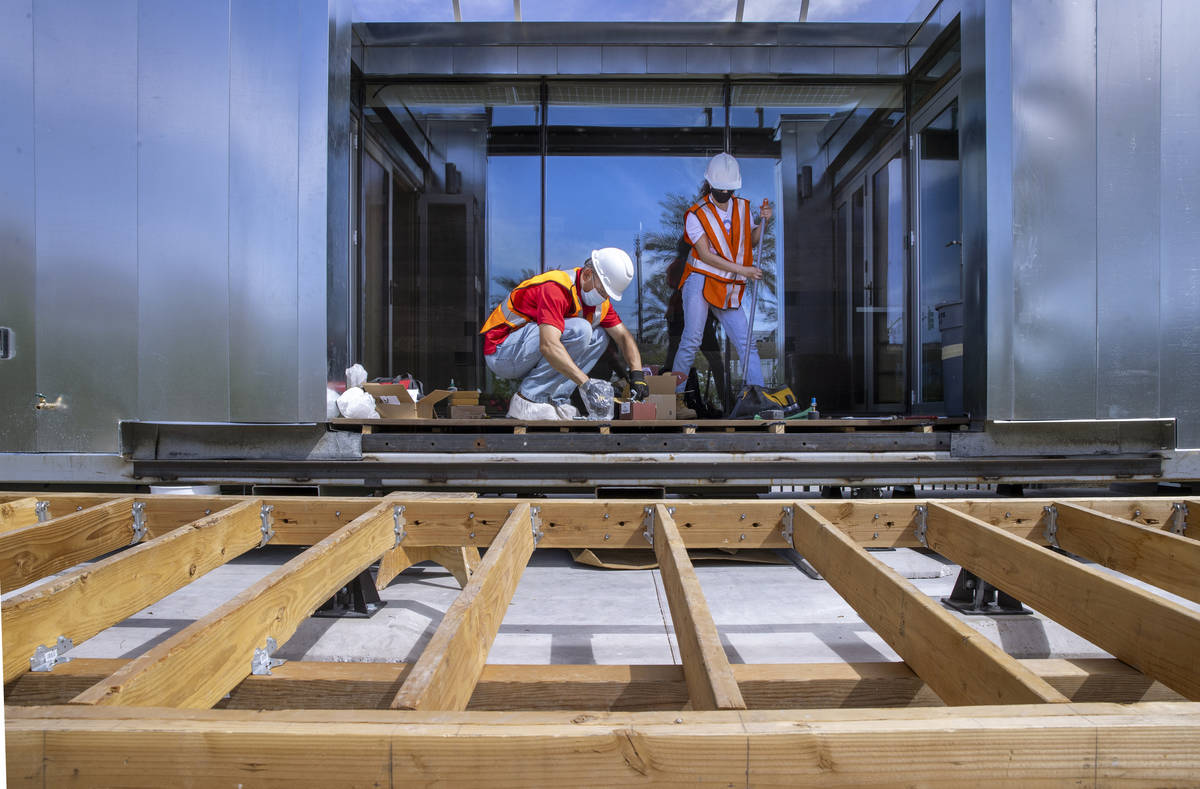 Student Jorge Medina, left, begins to assemble parts for a deck soon to be installed as a UNLV team readies to compete in the U.S. Department of Energy's Solar Decathlon Build Challenge on Friday, April 9, 2021. They were working to complete their project "Mojave Bloom," a 628-square-foot home they've built from scratch, currently at the Las Vegas Healing Garden. L.E. Baskow/Las Vegas Review-Journal) @Left_Eye_Images 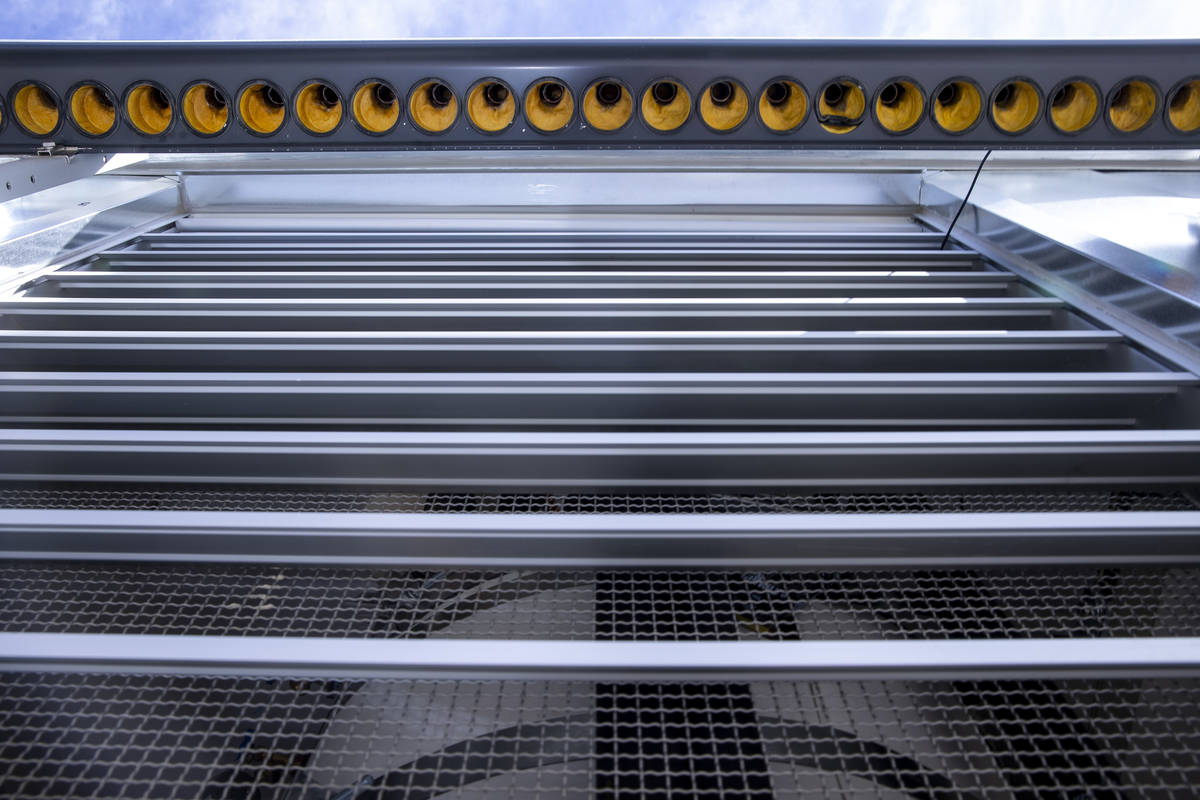 Ventilation of the electrical components are one of the special features as a UNLV team readies to compete in the U.S. Department of Energy's Solar Decathlon Build Challenge on Friday, April 9, 2021. They were working to complete their project "Mojave Bloom," a 628-square-foot home they've built from scratch, currently at the Las Vegas Healing Garden. L.E. Baskow/Las Vegas Review-Journal) @Left_Eye_Images 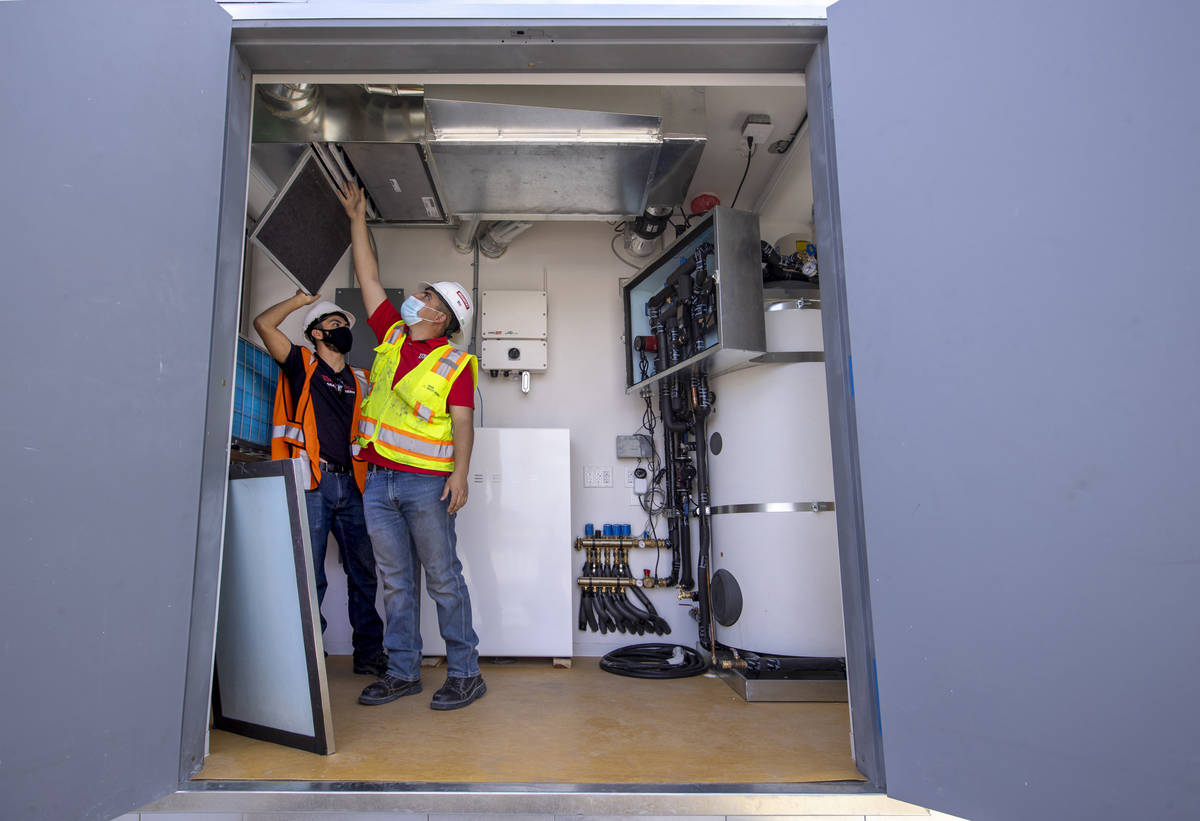 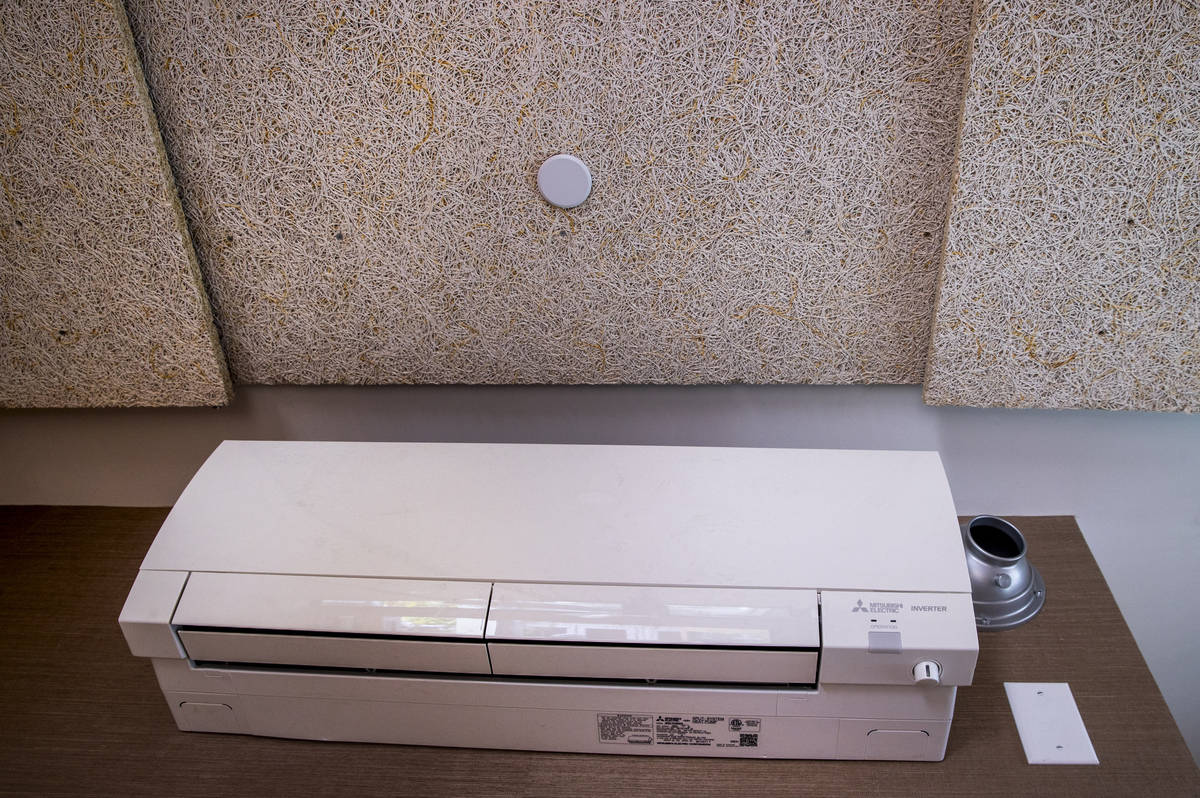 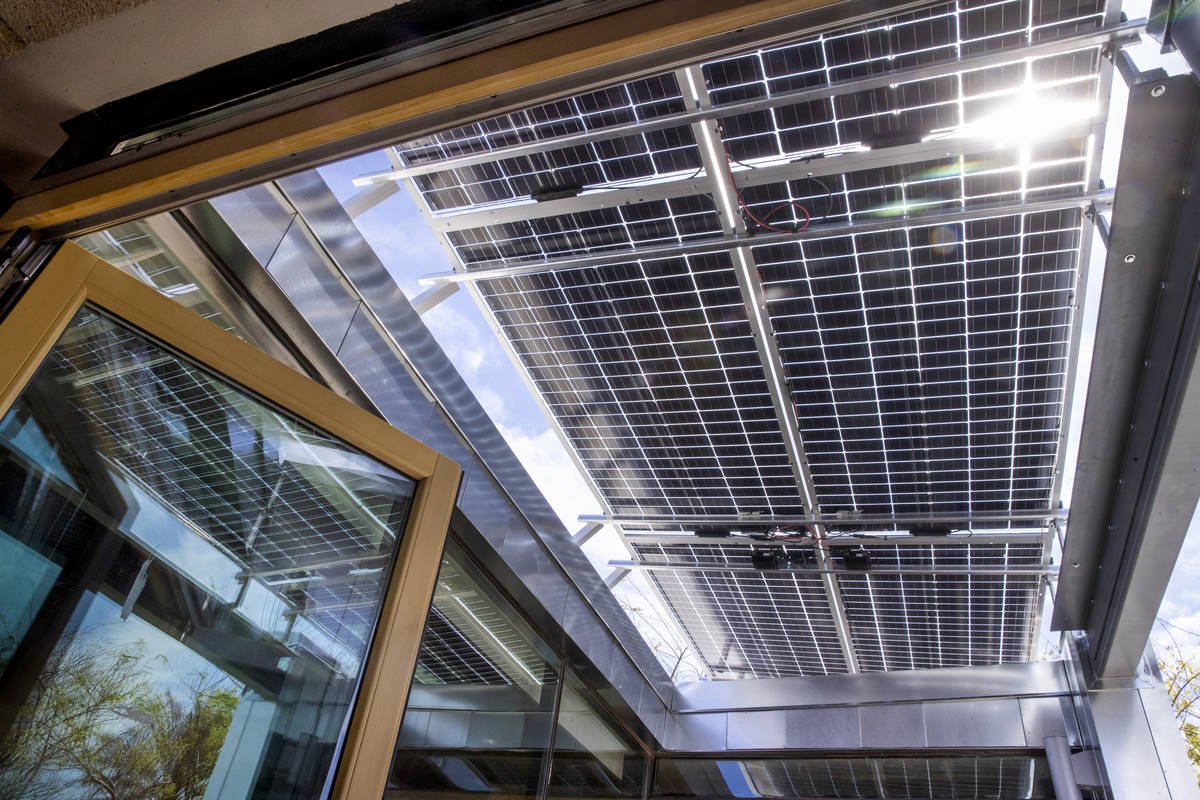 Full roof solar panels are one of the special features as a UNLV team readies to compete in the U.S. Department of Energy's Solar Decathlon Build Challenge on Friday, April 9, 2021. They were working to complete their project "Mojave Bloom," a 628-square-foot home they've built from scratch, currently at the Las Vegas Healing Garden. L.E. Baskow/Las Vegas Review-Journal) @Left_Eye_Images 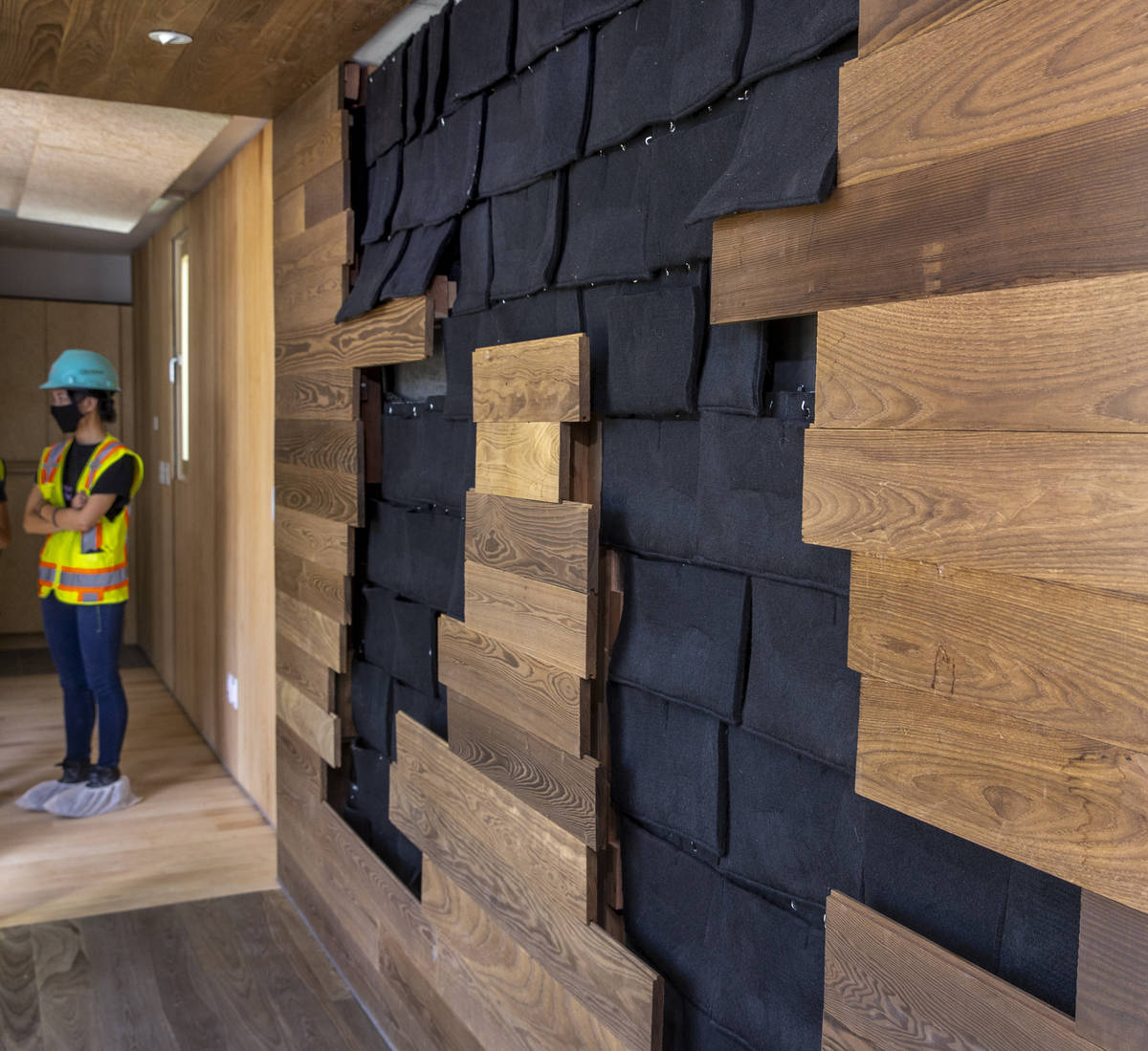 A hallway will feature live plants along the wall as a UNLV team readies to compete in the U.S. Department of Energy's Solar Decathlon Build Challenge on Friday, April 9, 2021. They were working to complete their project "Mojave Bloom," a 628-square-foot home they've built from scratch, currently at the Las Vegas Healing Garden. L.E. Baskow/Las Vegas Review-Journal) @Left_Eye_Images 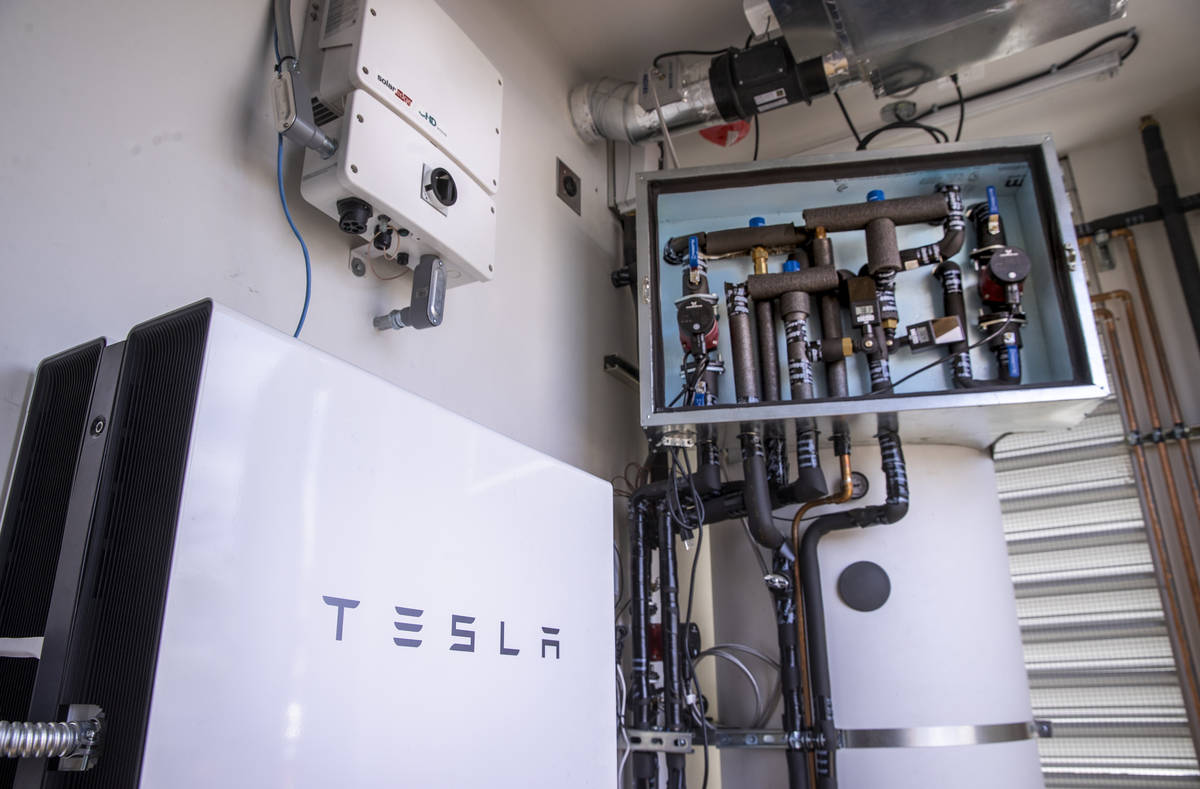 Two Tesla batteries are among the special features within as a UNLV team readies to compete in the U.S. Department of Energy's Solar Decathlon Build Challenge on Friday, April 9, 2021. They were working to complete their project "Mojave Bloom," a 628-square-foot home they've built from scratch, currently at the Las Vegas Healing Garden. L.E. Baskow/Las Vegas Review-Journal) @Left_Eye_Images 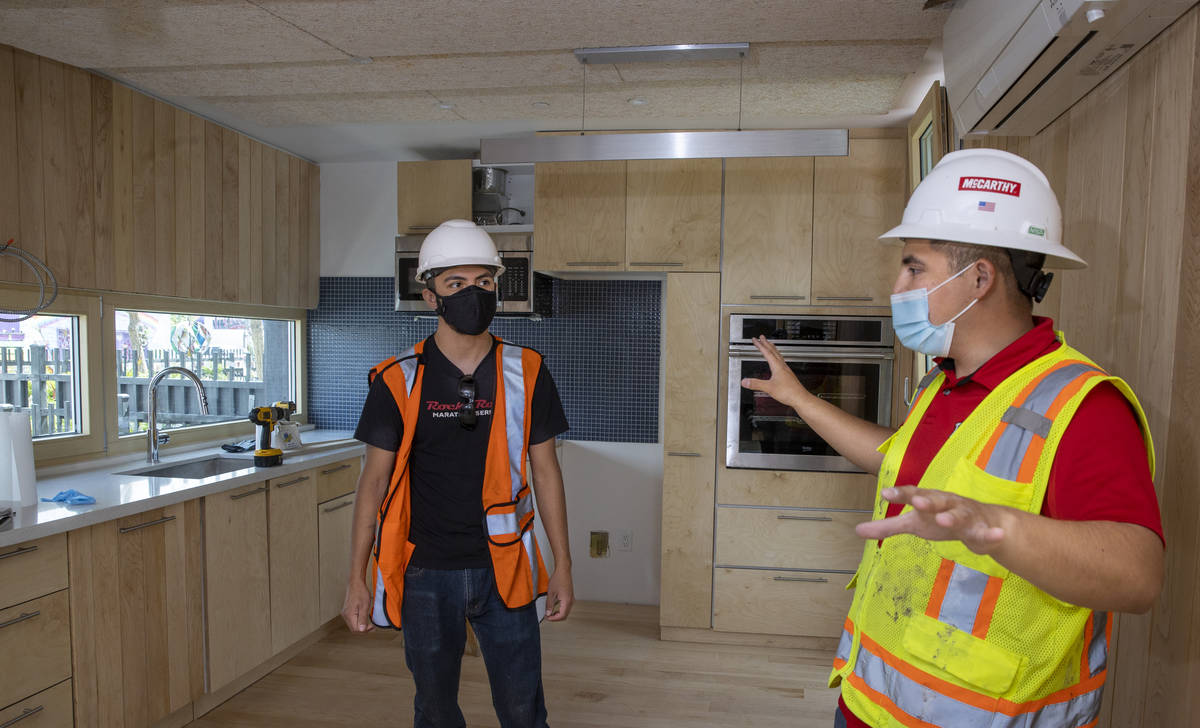 Students Alejandro Munoz, right, and Miguel Vazquez talk about the work left to do in the kitchen as a UNLV team readies to compete in the U.S. Department of Energy's Solar Decathlon Build Challenge on Friday, April 9, 2021. They were working to complete their project "Mojave Bloom," a 628-square-foot home they've built from scratch, currently at the Las Vegas Healing Garden. L.E. Baskow/Las Vegas Review-Journal) @Left_Eye_Images

Originally the competition was set for July 2020, but due to COVID, the competition was pushed out until April 15, 2021. The judges spend three days evaluating the homes in 10 different categories which include: innovation, comfort, and environmental quality, energy efficiency, market potential, and affordability for the layperson to reproduce.

Due to COVID, it put the project behind about nine months, which means that the students weren’t able to transport their projects to the original competition site on the National Mall in Washington, D.C. Students have to work in smaller groups, wear their masks and social distance anytime that they can, which has created a challenge but the students are able to manage.

UNLV’s team is made up of about 50 students from architecture, engineering, and other fields that contribute to the elements needed for Mojave Bloom. The main focus is creating a place of healing and respite for the military veterans that are suffering from the effects of wartime trauma, which included brain injuries and PTSD.

About 10% of the population has some sort of military background and little help or housing for themselves. With the new housing, some veterans will be able to have a safe and reliable home built by our local students. Several team members had served in our armed forces, including a professor who realized how many people they could be helping.

Ryan Manthei, student team leader and architecture major, declared, “We have been working on the project since about November 2019. This is when we started the design phase. Since then we started construction around February of 2020. Personally, I put in about 40 hours each week but we have a big team with many people putting in countless hours.” They have a dedicated team that is working toward completion, between raising funds and getting product donations.

You may be thinking, “Students are building this, how are they managing their homework?” You’ll realize that it simply gives the students more time-management skills to help them in the future. Manthei stated, “There are times when I stay up late to catch up on my other classes and times when I have to let go of doing everything myself and trust my classmates will do a good job without me. I feel incredible gratitude for the people I have been exposed to during my engagement on this project.”

Eric Weber, the faculty team leader, and the leader of UNLV School of Architecture’s Design+Build Studio, which has also had a major role in both this project and in UNLV’s 2013 team, which won second place overall said, “When we talked to the City of Las Vegas, they asked us about placing it in the Las Vegas Healing Garden, which was created to commemorate the lives lost in the October 1, 2017, Route 91 Harvest musical festival shooting. We thought it was a perfect way to help facilitate our community’s healing process, giving back to the place that all of us call home.”

With these homes being built, many different technologies will follow to make them more comfortable. The space planning, window placement, and the building envelope in concert make it so the homes can maintain interior thermal comfort without needing any or with little air conditioning. They have a feature called “phase change material plenum” which is a box containing both air filters and a eutectic salt that will purify the air and then preheat or precool the incoming fresh air using very little energy.

Unlike previous years, Team Las Vegas must now retrofit Mojave Bloom with cameras to accommodate the competition’s pivot from an in-person showcase on D.C.’s Washington Mall to its first-ever virtual extravaganza, complete with guided tours for the public. The difference between previous UNLV solar decathlon homes to this year’s, is the use of bifacial solar panels. The solar panels are not only more aesthetically pleasing to look at but also are more efficient because they produce energy on the top, like a typical panel, but also on the bottom. Once sunlight passes through the panel, it bounces off the white membrane roof and hits the back of the panel which makes more energy.

The project finally has been moved to its final site on March 24, where the final touches will be made, including window trim pieces and the bathroom mirrors. The other items on the exterior will add the gate, which will enclose the courtyard but facilitates passive ventilation, and their handmade planter which will surround the building.