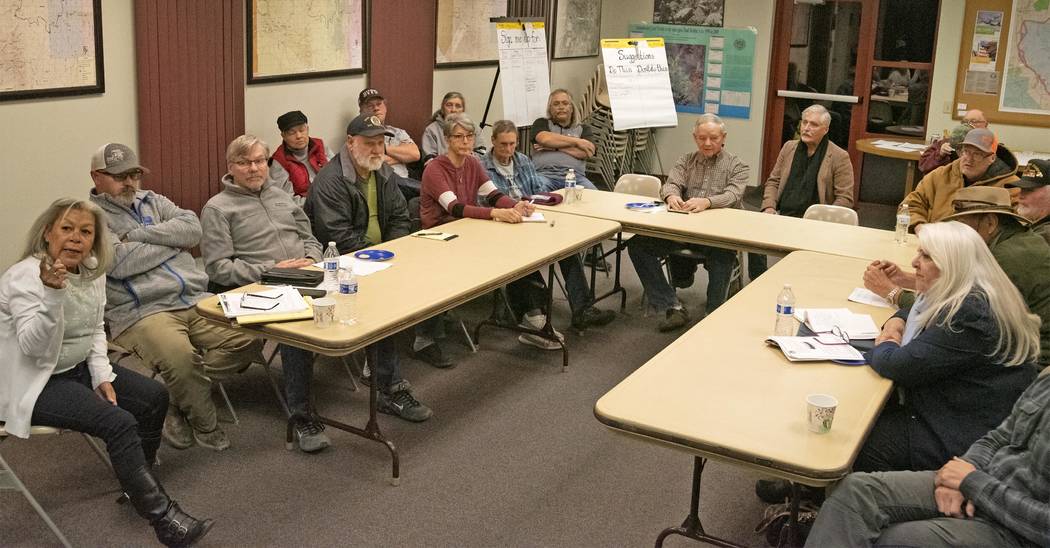 Richard Stephens/Special to the Pahrump Valley Times Erika Gerling, board treasurer, far left, conducted the meeting, the purpose of which was to craft vision and mission statements for the community.

How do residents of Beatty view their community, and what do they want its future and mission to be? Those were the questions under consideration at a gathering of individual citizens, business and organizational representatives in the Beatty Community Center Wednesday evening, Jan. 8.

The purpose of the meeting, under the auspices of the Beatty Town Advisory Board, was to craft vision and mission statements for the community. Board treasurer Erika Gerling conducted the meeting.

Gerling said that the two statements should reflect the same ideas, “to have a consistent voice when we talk about our community.” She shared the town’s existing vision and mission statements and asked what people might want to change or add in them, and said that they should reflect how residents feel about their town.

Albert Verrilli mentioned the “roller coaster” effect on the population and economy from gold mining.

Verrilli thought there should be something in the statements about embracing modern technology, and others agreed, noting, for instance, that Beatty is still the only rural community in Nevada with residential and commercial fiber-optic internet.

Responding to what some people liked about Beatty that others didn’t, Karl Olson said, “Some are OK with junk yards all over the place and the mess at the shooting range; others see a need for change to move forward.”

Rupert Bragg-Smith agreed, saying, “We want some cleanliness in town, for people to take pride in their homes.”

Rupert Bragg-Smith said that in formulating a vision statement participants needed to think about what attracted them to the town and what makes them want to stay.

Torres also advised that the “Gateway to Death Valley” title, which Beatty holds a copyright on, should be included not only in these statements, but in as many town documents and communications as possible to promote the town’s brand.

After much discussion, the following preliminary drafts of a vision and mission statement were produced. They are basically revisions and refinements of existing statements and are not final.

Vision Statement: The town of Beatty will continue to be a place where our small town atmosphere is capitalized upon. Where historical sites are preserved. Where natural beauty is protected and where good stewardship of resources is practiced. Where our role as the “Gateway to Death Valley” is embraced. Where educational and sustainable economic opportunities are expanded, with responsible growth and development. Beatty is a community where families live, work, and play in harmony.