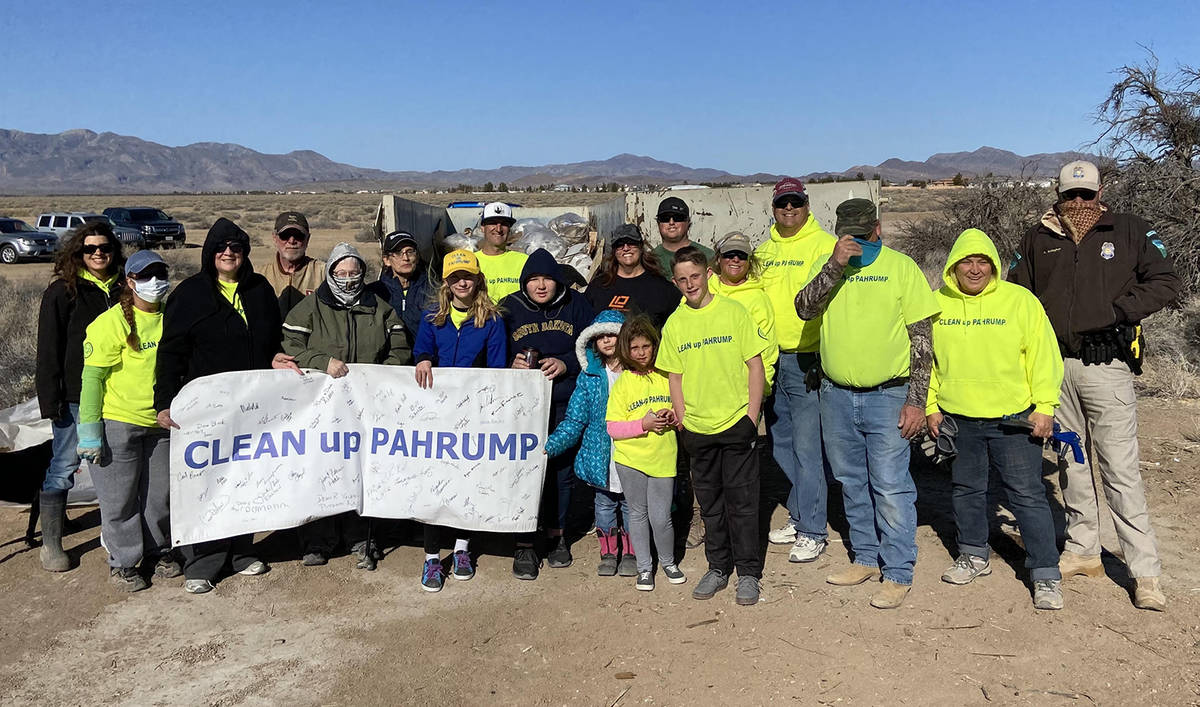 Special to Pahrump Valley Times Following last weekend's efforts, volunteers of "Clean up Pahrump" collected 1.33 tons of trash off of Gamebird Road. Pahrump's C&S Waste Management Solutions donated a dumpster for their endeavor. Founder Faith Muello is pictured on the far left, while BLM Law Enforcement Field Staff Ranger Ryan Gallagher stands on the far right side of the photo.

After arriving in Pahrump from the Northeast, several years back, local resident Faith Muello noticed something along the roadways and the desert which became a source of annoyance to her.

Junk, trash and all kinds of different debris was scattered about throughout town.

As a result, Muello founded a 501 (c)(3) nonprofit organization called “Clean up Pahrump” where she and more than a dozen volunteers travel about town to simply pick up the trash.

“I moved here from Massachusetts in July of 2017, and while I was driving around one day I noticed that there was a lot of trash here,” she recalled. “It was more than I was used to, so I eventually took my pickup truck into the desert and filled the bed up with all of the trash that I collected, and it took about an hour.”

After her trash collecting detail, Muello came up with the idea to seek volunteers to go out each Saturday and pick up trash, for the betterment of the community.

In fact, on Saturday, Feb. 27, the group picked up more than 1.3 tons of trash, which was deposited in a dumpster provided by Pahrump’s C&S Waste Solutions.

“We do group cleanups every Saturday morning, 8 to 9 a.m., and then in summer, with the warmer weather, we do it from 7 to 8 a.m.,” she said. “We basically go out and scout around for trash. I have a horse and sometimes when I’m out riding, I see a lot of trash and it’s sad because I also see parents with their kids, enjoying the desert, and I know that they don’t want to look at piles of garbage.”

Additionally, Muello said she’s pleased that officials with the Bureau of Land Management, (BLM), are actively investigating acts that she determined were illegal dumping.

Since founding the Clean up Pahrump organization, Muello also spoke about other interesting items that she and volunteers found while picking up trash in the desert and roadsides, including the proverbial kitchen sink, and occasionally a few stray bucks.

She also mentioned a few incentives for the volunteers who go out each Saturday.

“The end of last year, we actually found an old wedding dress, and on the side of one road, we found a kitchen sink,” she recalled. “We also do a raffle and we have a few businesses that donate items week after week. They don’t necessarily have to pick up trash on Saturday mornings, as long as they are out there picking up trash and posting the photos to our website, and encourage others to do the same. We also have other local businesses that donate monetarily, which helps us with costs that we have because we are a non-profit organization. Those who want to volunteer are urged to bring along plenty of fluids, but leave discussions of politics at home.”

Cleanup locations are normally announced by the Wednesday before each Saturday cleanup.

Muello said the organization also welcomes suggestions on areas to clean throughout town.

In order to join the Clean up Pahrump organization, or get additional information, login to their Facebook page, or website at cleanuppahrump.org, to send a message.