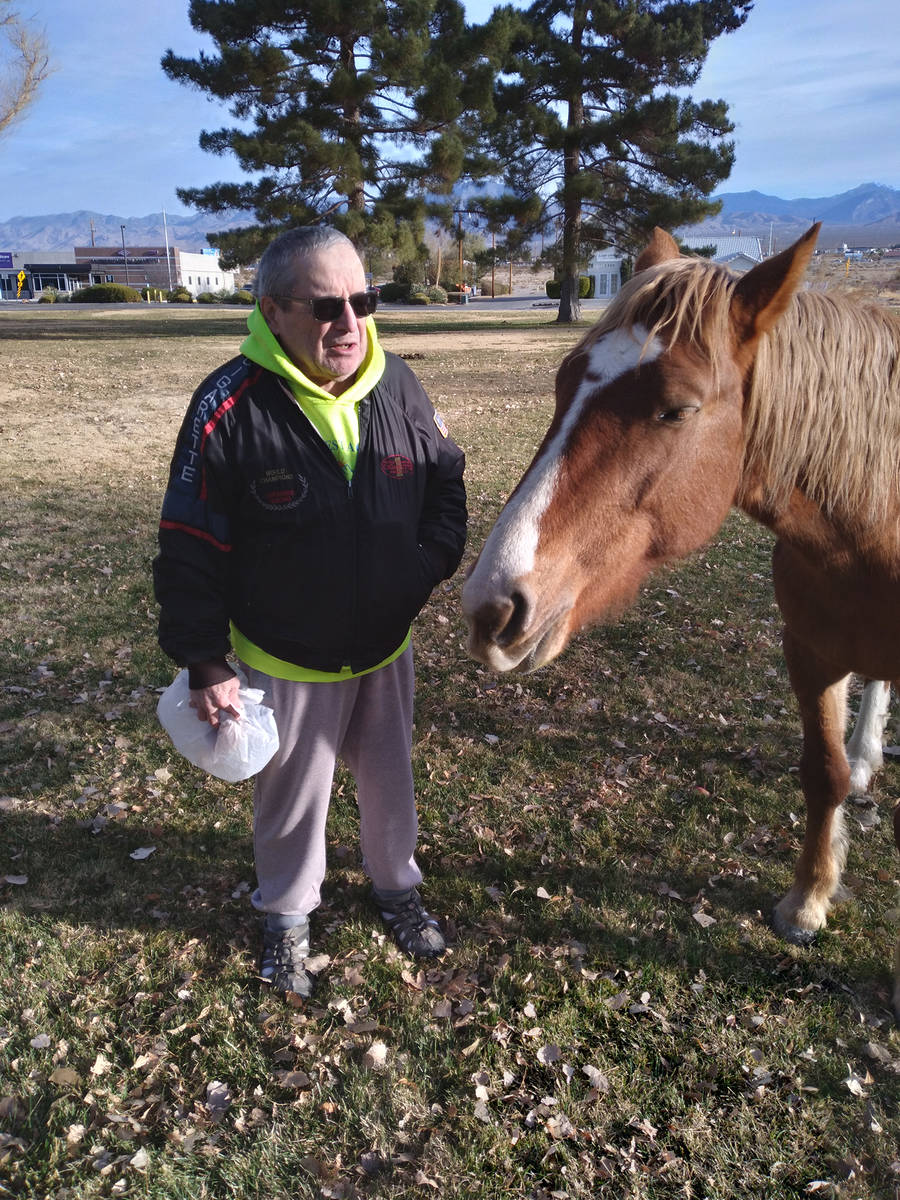 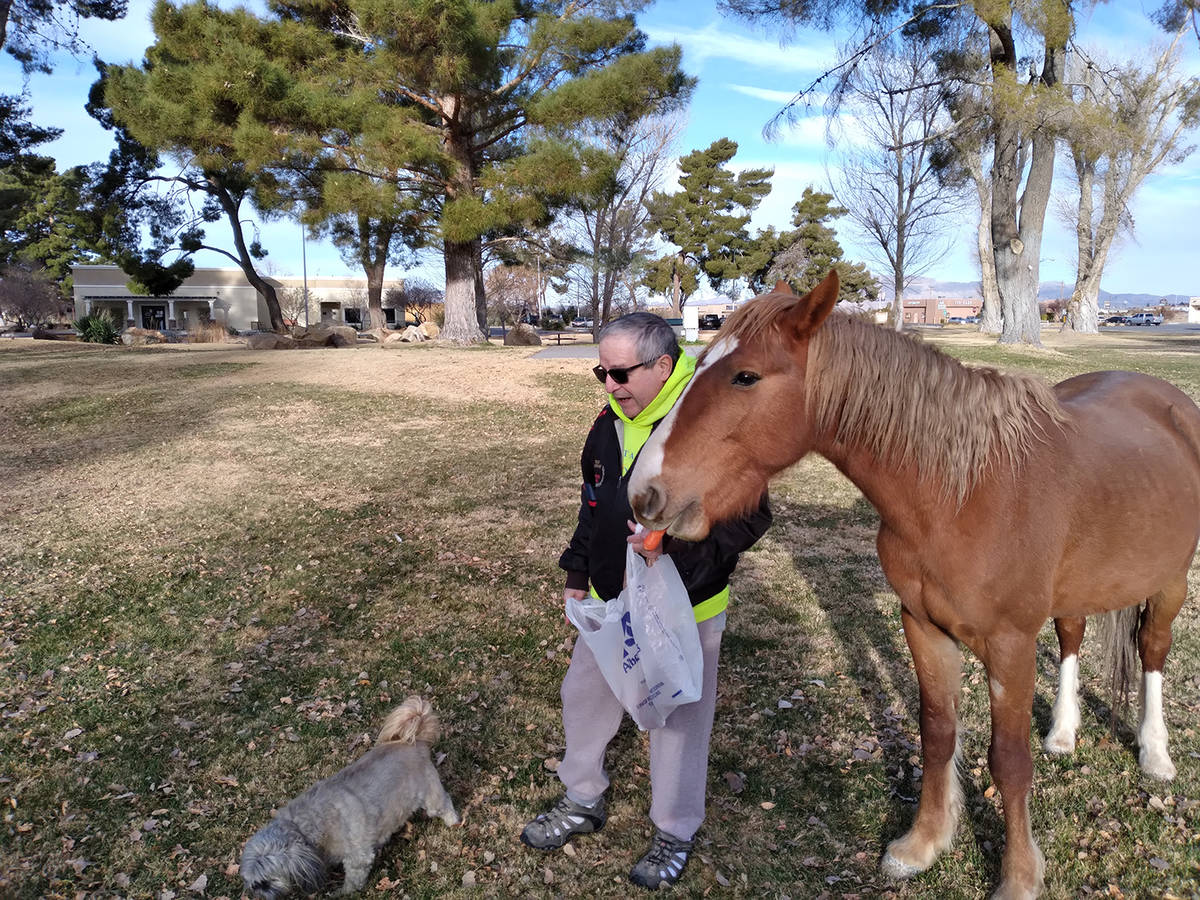 Selwyn Harris/Pahrump Valley Times Proenza said he befriended the wild mustang while out walking his dog Oliver a few weeks back. All three now appear to be best buddies. 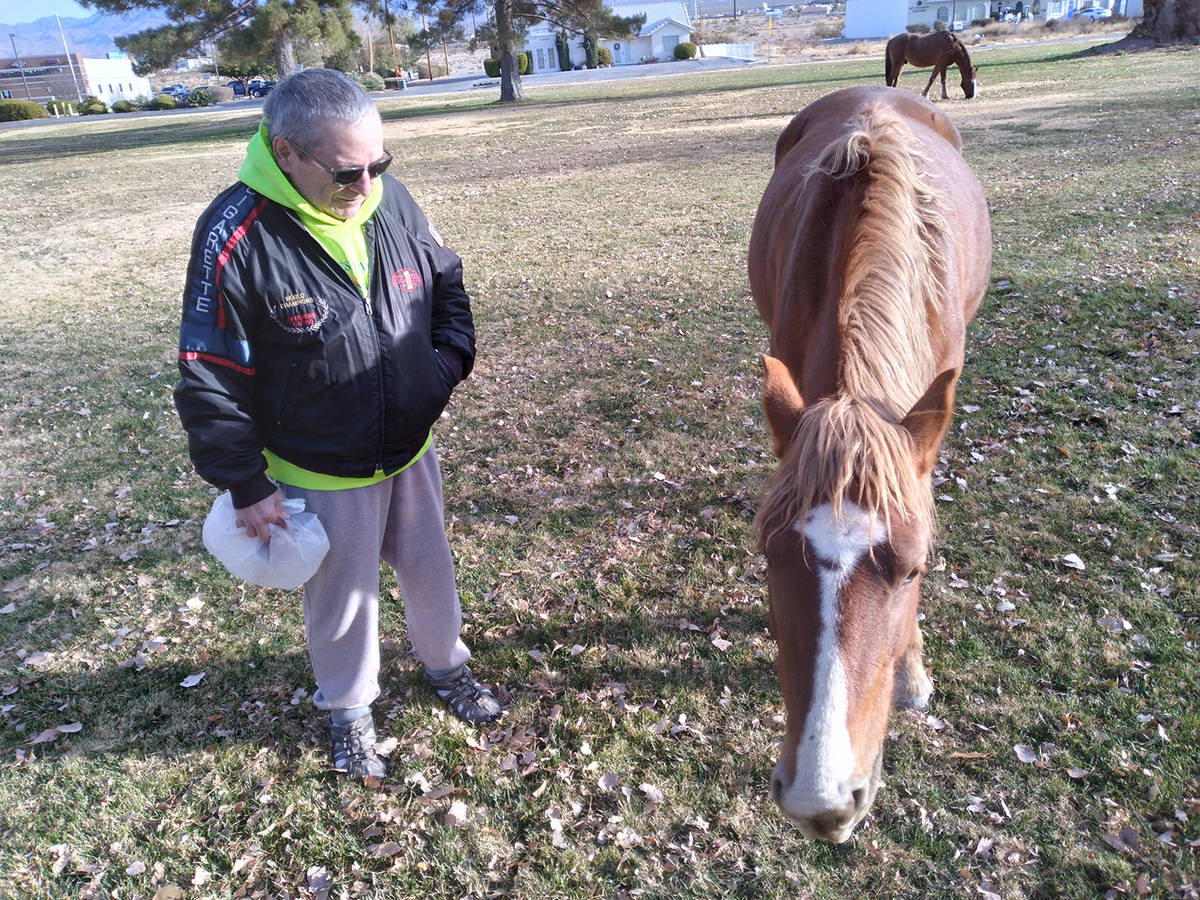 Those who have lived in the Pahrump Valley for any period of time are familiar with the wild mustangs, which are normally seen roaming the foothills along the east side of north and south Highway 160, however their presence is being made in and around the middle of town, as of late.

As an avid animal lover, Proenza said he enjoys seeing them during his walks, so much so, he now ponies up a few treats for the horses grazing in the Calvada Eye.

He actually nicknamed one of the mustangs “Lightfoot.”

“I give them carrots and apples,” he said. “I first saw them out here about two weeks ago. First it was just one and then the other one came around and they have been hanging out together for the past two weeks. They come down from the mountains, but this year is the first time they have been coming here at the Calvada Eye. It’s very fertile here and they love the grass and the open space. It’s totally open for them to roam around and nobody bothers them.”

Due to the recent presence of the equines in the area, Nye County Animal Control Officer Levi Gregory said he and other officers have increased their patrols at the Calvada Eye, for the safety of the horses, pedestrians, and motorists as the animals frequently cross Highway 160 to graze.

“We estimate there’s probably about 16 horses around the area,” he said. “The one with all the scars has been here for about a month. We also have a new one but I don’t know where he picked her up. The BLM was actually out here looking for that horse yesterday. Fortunately for that one, he disappeared. They were out somewhere and we couldn’t find them. He wanted to see if the horse was actually wild or tame. It has markings and scars on it like it’s wild. He has to evaluate it, and if he returns, the BLM official will put a leader on him and take him away. There will be an auction coming up later this spring. So he will probably end up there.”

Gregory also noted that it’s best that the wild horses be admired from a safe distance, while discouraging residents not to feed the animals.

“The bad part about people touching them is the fact that they are wild,” he advised. “Sometimes they lose their natural fear of human beings and they come to expect people to bring them food, and then they can get dangerous at times. When you’re messing around with an 800-or 900-pound animal, things can go bad really quick. In the wild, when they are up in the foothills, they can actually kill coyotes with a back kick or front kick. They will stomp them.”

When asked if a local resident has the proper means to capture and take in a wild horse, Gregory said there’s a process one must go through.

“They would have to go through the BLM,” he said. “The BLM owns them and there is paperwork they have to process, so before someone tries to capture one of these wild horses, they should go through the BLM first and talk to them about it. I just also want to reiterate to the community, please don’t feed the wild horses. Let them be wild, because they have lived here a lot longer than anyone has and they will probably continue to do so. Long after we’re gone, chances are they will still be around.”

Proenza, meanwhile, said he still plans to visit with the mustangs while he’s out walking his dog.

“I really hope that they can remain out here,” he said. “This is Pahrump, it’s not Las Vegas. We have a lot of animals out here and a lot of people who care about animals. It’s just something special to have in our small community. Yesterday when I brought some treats out, he actually followed me to my car. It was unbelievable because he just looked at me with this expression that said, do you have another apple for me?”