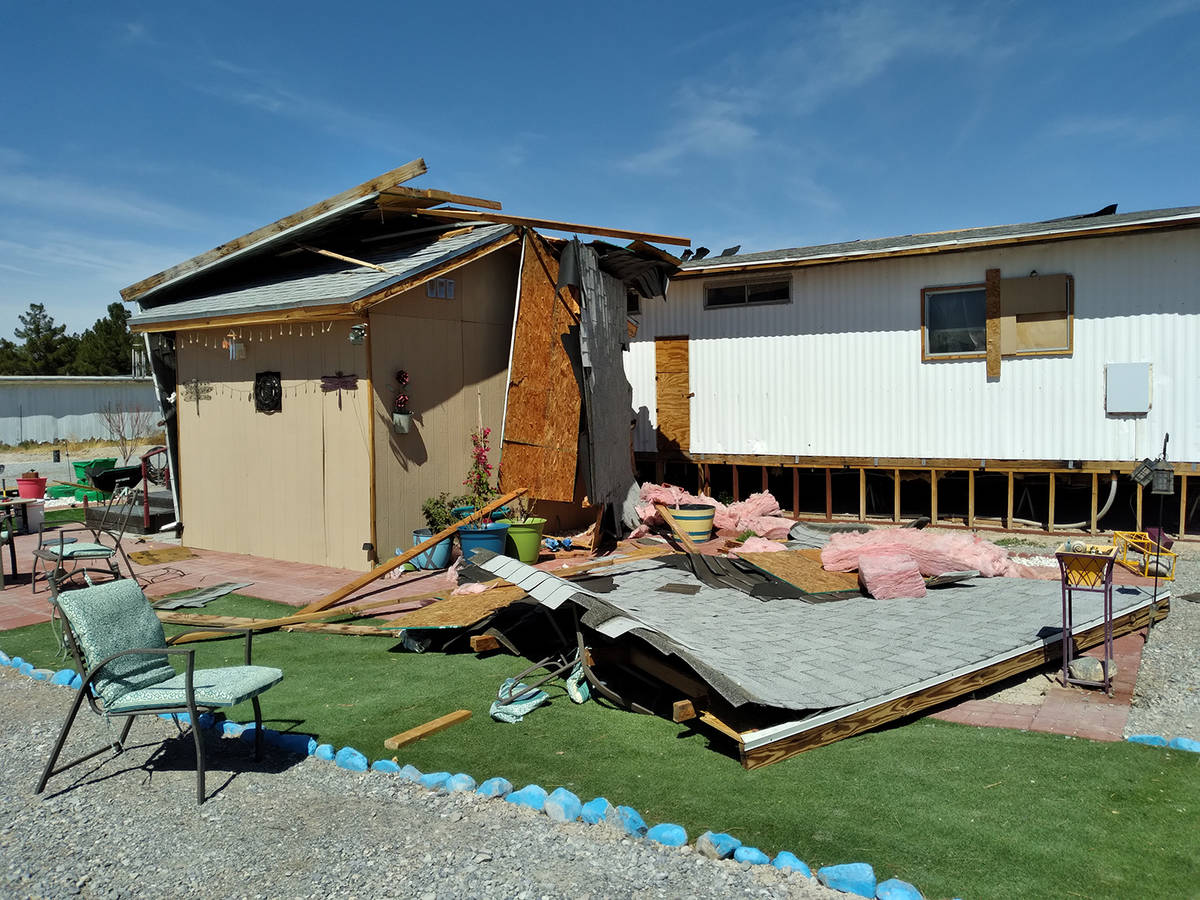 Selwyn Harris/Pahrump Valley Times Winds exceeding 40 miles per hour tore the roof off of a residence just after 3:30 p.m. on Tuesday, March 23. The wind event also knocked out power to the home after roofing materials and debris struck a utility box on the property. No injuries were reported. 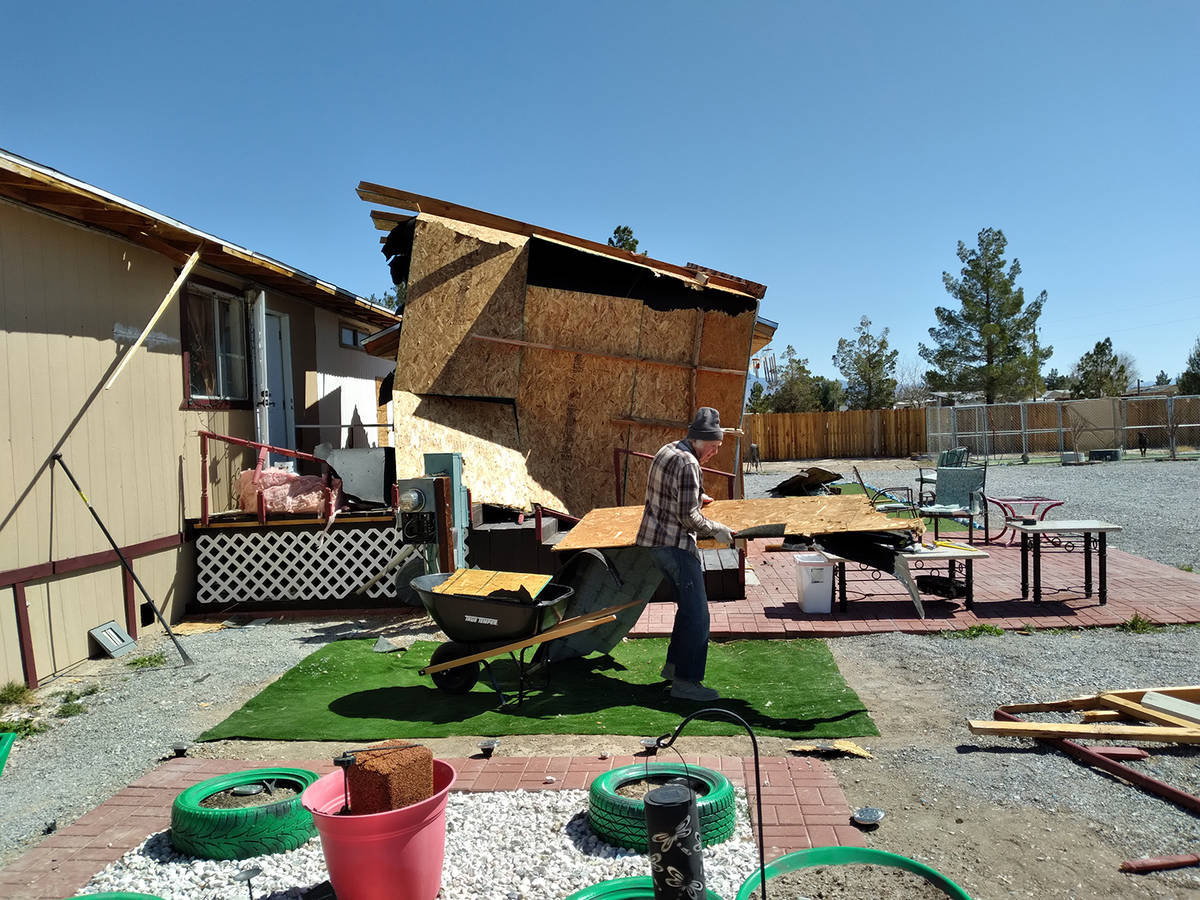 Selwyn Harris/Pahrump Valley Times Jess A. Dennis, an 80-year-old Army veteran clears debris from the backyard of his 3761 West Windsong Lane residence following Tuesday's windstorm. Dennis said he would appreciate any type of community assistance in order to begin repairs, as his daughter is working with the insurance company this week.

An 80-year-old veteran is seeking assistance after very windy conditions, with winds exceeding 40 miles per hour blew off a large portion of roof on his Windsong Lane home on Tuesday afternoon, March 23.

Jess A. Dennis, who moved to Pahrump from Moab, Utah about three years ago, lives at the residence, along with two renters.

The property, he said, belongs to his daughter, who moved out roughly a year ago.

“It happened at about 3:30 and all of a sudden, the whole house started shaking and I thought it was an earthquake, and it knocked the power out right away,” he said. “The other renter here looked out the kitchen window and said the roof of the shed blew off, but I said it was the roof to the house that blew off when I came outside. My daughter is working with the insurance company and she asked me to clean up and fix whatever I could, but I wasn’t expecting this kind of fix-up. It blew the entire front portion of the roof off.”

Fortunately enough for Dennis, who is on a fixed income, he and his grandson were able to get the electricity up and running about four hours after the incident.

“The power company came by and looked at it and told us what the problem was, but I told them that I didn’t want to touch anything until the insurance company is contacted,” he said. “We had to remove a whole bunch of roofing materials that fell down on the meter box, and knocked it out. My grandson and I pulled the roofing material off of the meter box and we were able to get the power turned back on, but now we are in a home without a roof.”

Dennis also said that due to the present condition of the residence, he has major concerns about upcoming weather conditions, especially precipitation.

“The ceiling is exposed on one half of the roof, so if it rains, that would be a big concern, so here we are, living in a home without a roof,” he said. “It’s a sad situation, and it’s part of life, but actually it shouldn’t be part of life because I wouldn’t want anybody to go through this. It’s something that we just have to work through here.”

Dennis said he has reached out to area organizations for assistance, but at present, it’s basically a “wait and see” situation.

“I’ve been in contact with some of the church people from the Church of Jesus Christ Latter-Day Saints, and they are going to see what they can get, things that we need immediately,” he said. “I’ve also been in contact with some of the different organizations around the valley, but I haven’t had any promises of any additional help. I got in touch with the veteran crisis line and they said they are going to make some phone calls. I also spoke to someone from the VA Outpatient Clinic here, and they said they will also make some phone calls.”

Until he hears back from the organizations, Dennis said for now, it’s just he and his grandson working to clean up the backyard of the home.

“As far as immediate help, any kind of physical labor would be appreciated to help remove the wood,” he said. “We have a bunch of scrap lumber that we need to cut up into smaller pieces so we can put it in the dumpster. We definitely need somebody with some carpenter skills to volunteer their help to rebuild the roof. There’s a lot of physical labor involved, so if this goes out to the community, we are looking for help. This is a good chance for the citizens of Pahrump to come together, and we would greatly appreciate any help that can be offered.”

Additionally, working throughout much of Tuesday afternoon, Dennis has not had the time to eat a decent hot meal.

“I haven’t taken a break to eat because I’ve been working all morning,” he noted. “Meals are also a concern because we don’t have time to sit down and cook a hot meal. I’m on a fixed income, and any extra money I have will be used to get the roof back over our heads, but it’ll come together hopefully.”

Fortunately, no one was injured in the aftermath of the incident.

Anyone interested in assisting Jess Dennis may leave a message at 435-355-0071, or visit his 3761 West Windsong Lane residence.