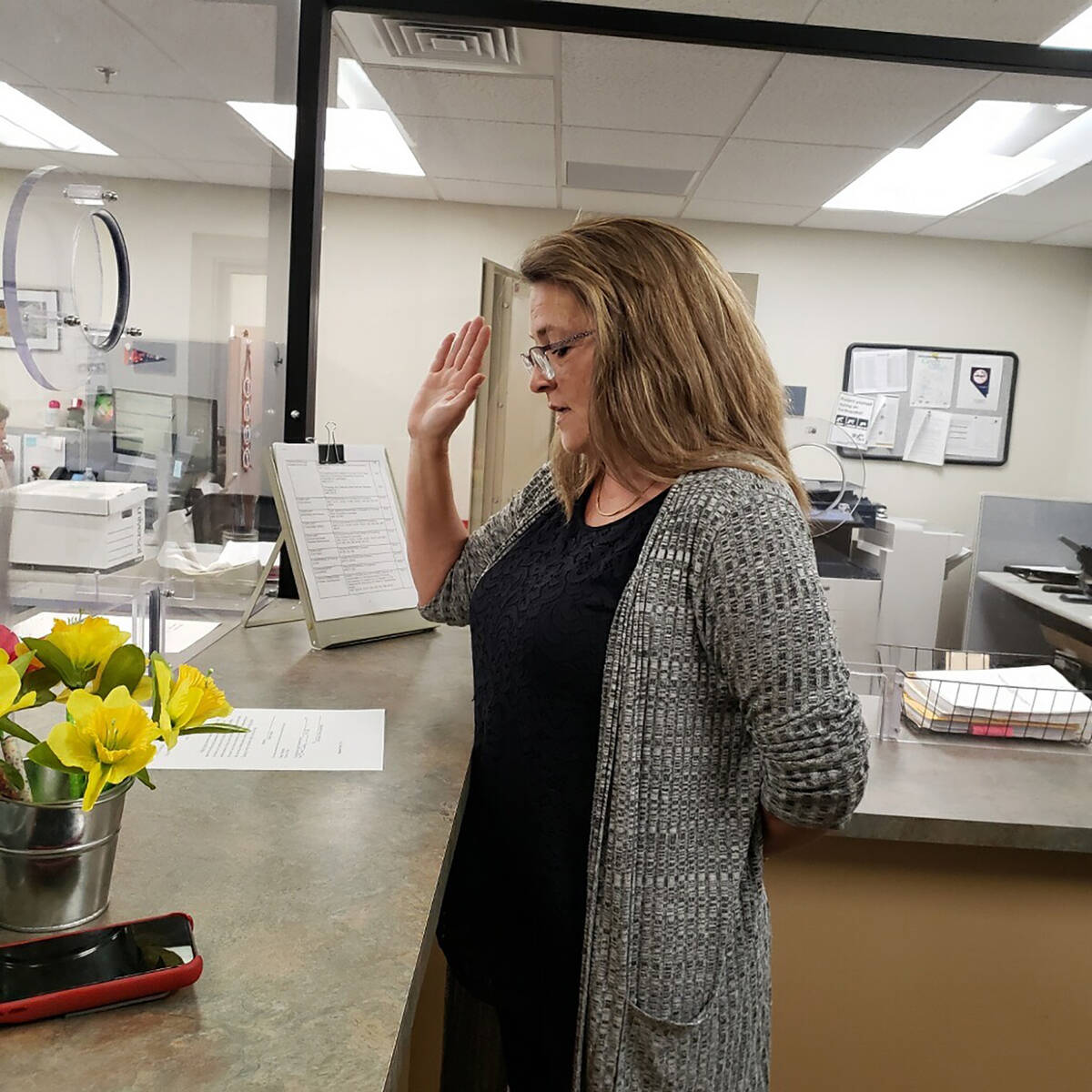 Special to the Pahrump Valley Times Newly appointed Nye County Treasurer Raelyn Powers is pictured taking her oath of office on Tuesday, July 19. She was elected to the office via the primary election before being appointed as interim treasurer as well. Photo courtesy of Nye County.

Powers was one of two candidates on the primary ballot for the office, with her opponent being incumbent John Prudhont. Both are Republicans. Powers won the primary race for the treasurer’s seat and, and with no Democrats or third-party candidates filed, she was set to assume office in January 2023.

However, she has taken over leadership of the office early, with her appointment from the commission effective as of Wednesday, July 20.

“It would be an honor to be appointed at this time,” Powers told commissioners during the Tuesday, July 19 meeting. “It would provide us the ability to keep on track, to continue our work as far as training, continue the department’s future success with handling all of the incoming money, bank reconciliations and property taxes, and continue the development of our department and our team.”

Earlier this year, then-Nye County Treasurer John Prudhont abruptly resigned from office, amid his campaign for re-election, leaving a vacancy that needed to be filled.

After interviewing three candidates, the Nye County Commission had appointed Mark F. Kampf, who happened to be running in the 2022 election for the Nye County clerk’s seat. However, with the resignation of current clerk Sam Merlino looming, Kampf has now resigned from the interim treasurer’s post to pursue appointment as interim clerk.

Facing yet another vacancy, the commission wasted no time in appointing another interim treasurer. During the same meeting at which they accepted Kampf’s resignation, the board also appointed Powers to the position.

“I fully support the appointment of Raelyn Powers,” Kampf added that afternoon. He noted that Powers has been a longtime employee of the treasurer’s office and she has already started to take over the reins in preparation for the transition between treasurers.

Before the appointment came up for a vote, Commissioner Leo Blundo asked a pressing question, relating to Powers’ tenure in the treasurer’s office. Apparently there was some contention between Powers and Prudhont when he was treasurer and she was on leave from her job for several months due to those issues. He asked her directly, “What happened?”

Powers said she was not entirely certain where the tension between herself and Prudhont had started and Commissioner Frank Carbone then interjected to see if the Nye County District Attorney’s Office had any advice regarding the appropriateness of the direction of the conversation. Deputy DA Brad Richardson said he felt enough had been said already.

Blundo was not happy about that response, asserting that he believed the public had a right to understand the full scope of the situation that had occurred in the treasurer’s office.

To that, Carbone replied, “I think they should and they will. Once everything is put together, it’ll all come out.”

Commissioner Bruce Jabbour then moved to appoint Powers, which passed with all in favor.