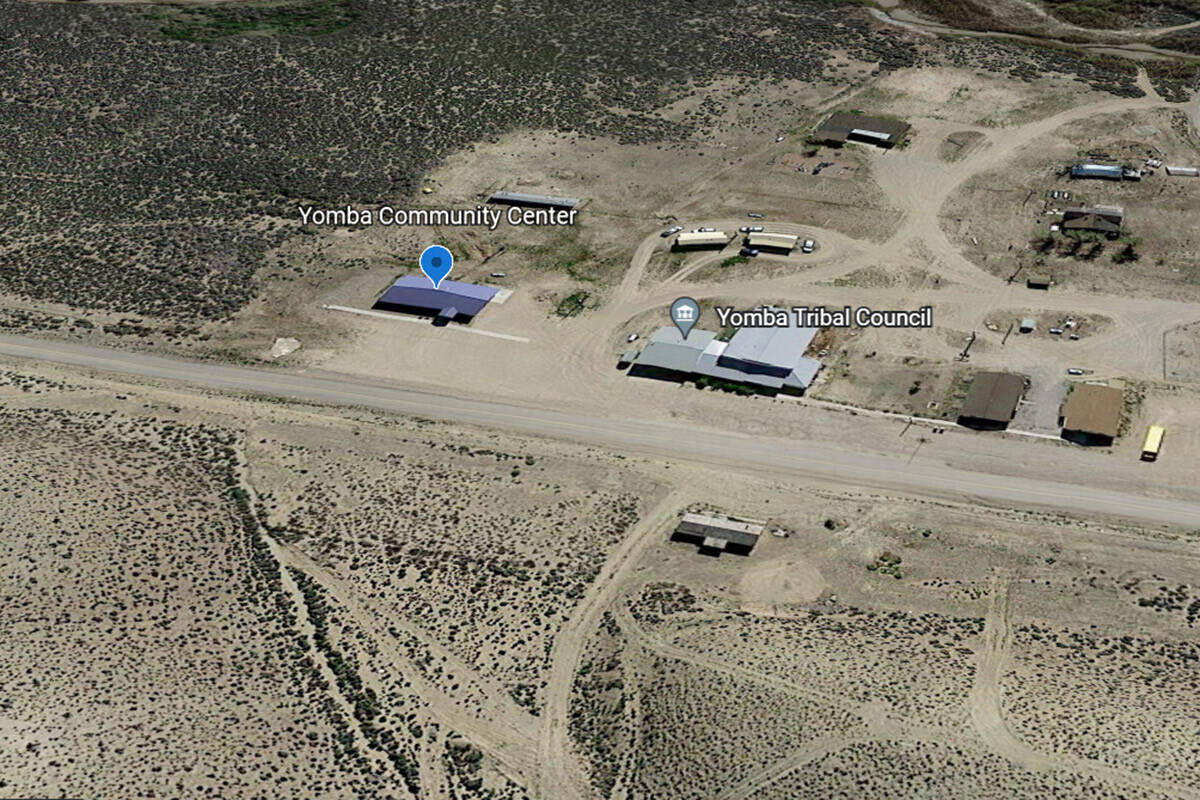 About four hours away from Pahrump in the northernmost tip of Nye County sits the remote reservation of the Yomba Shoshone Tribe, which recently had to go through great efforts to vote in the 2022 midterms.

Accessed by occasionally treacherous dirt roads, the reservation with a population of about 100 residents — depending on the time of year — includes the tribal headquarters, a community center, homes and a gas station.

Tribal members must travel about 150 miles to the town of Fallon for food, and their children travel about 35 miles one way to go to school in the small unincorporated town of Gabbs.

“If you don’t have a good car, a reliable vehicle or a telephone out there, you are really really barred from accessing just anything,” said Tribal Administrator Janet Weed.

With unreliable and spotty access to postal services, the tribe historically has had issues with participating in elections. In the last presidential election of 2020, a couple of members of the tribe went on horseback to pick up ballots for people, and then Weed and another member hand-delivered them in Tonopah, which was a “wild ride,” Weed said.

For the 2022 midterms, the tribe requested an in-person polling location from Nye County, which under Nevada statutes must accommodate the request. But with the transfer of county clerks, there was some confusion and the tribe almost did not get an easy way to vote.

The Yomba Shoshone Tribe sent a request to the Nye County clerk’s office on July 29 for a polling location on Election Day. On Aug. 1, the deadline, then-Clerk Sandra Merlino, confirmed that it received the request and would make the new clerk aware of it when he started. But the clerk’s office was also confused about what jurisdiction the tribe was located in, falsely claiming that it was in Lander and not Nye County.

On Oct. 17, Weed reached out again to get an update on the polling location for the tribe, and the new Interim County Clerk Mark Kampf told her she missed the deadline to request a location for the 2022 election, but that he would be happy to help the tribe in future elections, according to emails provided to the Review-Journal.

Once the county learned that the tribe did in fact make the request in a timely manner, Kampf got everything finalized on Nov. 4 and made it so a polling location could open on Election Day from 7 a.m. to 7 p.m.

Once the plan was set up, it worked out well, Weed said, adding that members of the tribe voted and registered for the first time. Two poll workers from Pahrump drove up the mountains and through a snowstorm, set up the polls and stayed all day, and the tribe provided them food.

Nye County published information about the polling location, describing that it was on Newe Road in Reese River Valley in northern Nye County, and that the community building has a blue roof and was next door to the tribal headquarters. It encouraged members of the tribe to help spread the word about the location.

“We also operate a one-day polling place each election for the Duckwater Shoshone Tribe in Nye County, which was held on October 25th. The county looks forward to providing the same for the Yomba Shoshone for future elections,” said Arnold Knightly, the public information officer for the county, in an email.

Kampf declined to take a call from the Review-Journal because it was his day off.

Bret Healy, a consultant with Four Directions Native Vote, a Native-led group advancing equality at the ballot box across Indian Country that has sued Nevada and multiple counties for election violations, advocated for the tribe and got things sorted out with the county.

“It came together as it should have,” Healy said, but “it’s not quite the same because they didn’t have the ability to make sure everybody knew about it.” A total of 10 people voted at the polling location, with 12 others voting by mail.

“We’re just thankful that we got to participate. We’re grateful to Brett Healy and his team,” Weed said, adding that they cooked breakfast burritos and brought out tribal members. “They empowered us.”

Nye County Commissioner Bruce Jabbour “came through” for the tribe, Weed said, adding that when he learned about the problem he pushed to get it fixed and knew exactly where the tribe was located.

“They’ve shown the right first steps,” Healy said, adding he did not have a lot of confidence that Nye County would work to correct the mistake. “That’s the first step towards equality and it is to be commended.”

“We certainly credit the clerk in Nye county for taking action when he became aware of it, but the reality is there should have been an early voting location out there the whole time,” Healy said.

The issue with Nye County, although it was fixed, highlighted the barriers to voting that have existed for tribal communities since Native Americans were guaranteed the right to vote in 1924, Healy said.

It has only been recently that some of these barriers have been able to get knocked down, Healy said. In previous fights to improve access to the voting booth, the state or county would say that it is a choice to live so rurally, or that people can vote by mail.

But postal systems are not equal between rural and urban areas, and people should not be punished for living on the tribal lands that were given to them after the government took their original lands, Healy said.

Some of those postal offices were established before 1924 and before Native Americans had the right to vote, Healy said.

Only 35 percent of homes on reservations have a home mailing system, said Taylor Patterson, executive director of Native Voters Alliance Nevada, and most Natives use post office boxes, some of which can be far away from their actual homes.

Another barrier for Native Americans is registering to vote. While tribal IDs are accepted, Patterson has heard complaints about the online registration not accepting their tribal IDs. Some folks are not being captured in the state’s automatic voter system, as they might not be interacting with the Department of Motor Vehicles, Patterson said.

Disorganization in clerks offices can trickle down in creating issues for tribal nations, Patterson said.

“It feels backwards that the tribes need to go through the counties rather than the state of Nevada itself,” Patterson said, since some counties are friendlier with tribes than other counties.

It should be just as easy to vote in rural northern Nye County as it is to vote in Incline Village in Lake Tahoe or at urban centers in Las Vegas, Healy said. Even though small tribes might only have 100 or so people, it should not matter how many people live in an area to determine whether or not they should get equal access to the voting booth, he said.

“The burden on the voter is what the metric should be, not the burden on the county to provide equal access,” Healy said, adding that the Yomba Shoshone tribe did not access equal voting. If it was equal, it would have requested early voting and the same hours as other polling locations in the county.

“We would hope that Nye County would do better next time, and do better without having somebody going in there and pushing them,” Healy said, “that they, on their own, will reach out to tribes and make sure they have access.”

More work to be done

Both Nye County and the Yomba Shoshone Tribe need to do a better job with outreach and visibility, Weed said. She would like to see county officials visit more and make an effort to encourage the tribe’s participation in government. In other counties, candidates running for office talk with larger tribes, who then donate to their campaigns, but Yomba is small and cannot afford to donate to campaigns, Weed said.

In the last legislative session, great strides were made in expanding voter access for Native Americans, Patterson said, such as not making tribes request a polling location year after year, and making that request permanent.

“This last election has shown we still have much further to go for every Nevadan,” Patterson said.

At the next legislative session, Patterson would like to see more bills that expand access to Native Americans, but she cautions legislators to be aware of tribal sovereignty and the differences between each tribe. Not every tribe needs a polling location on every reservation, since some tribes are already close to a location that they have been using for years.

“It’s important that tribes are consulted with their needs. I’d love to see a better consultation process with the clerks and the tribes. I know it’s tough because rural counties also have limited resources,” Patterson said. “The fact of the matter is that our people deserve just as much access to a voting booth as any other rural member of the state.”

Automatic voter registration was also expanded in the last legislative session through Indian Health Services, which many Native Americans use, Patterson said.

“That’s the best way to reach Native voters through that agency. I hope Nevada and IHS will work together to fill out that program,” Patterson said.

Work also needs to be done to improve enthusiasm to vote among of Native Americans, as there’s “an apathy all around Indian Country,” Patterson said.

For the Yomba Shoshone Tribe, there is a feeling among members that their votes do not matter, Weed said, and she is working to educate the tribe about why they should vote.

“It’s important for our people to vote. … We elect the people who make these policies,” Weed said, adding that tribal members are “dual citizens” in a sense — both citizens of their tribe and the United States.

“Even though this isn’t a system that was created by us or for us, we still need to participate in this system to get our ideas out there,” Patterson said.