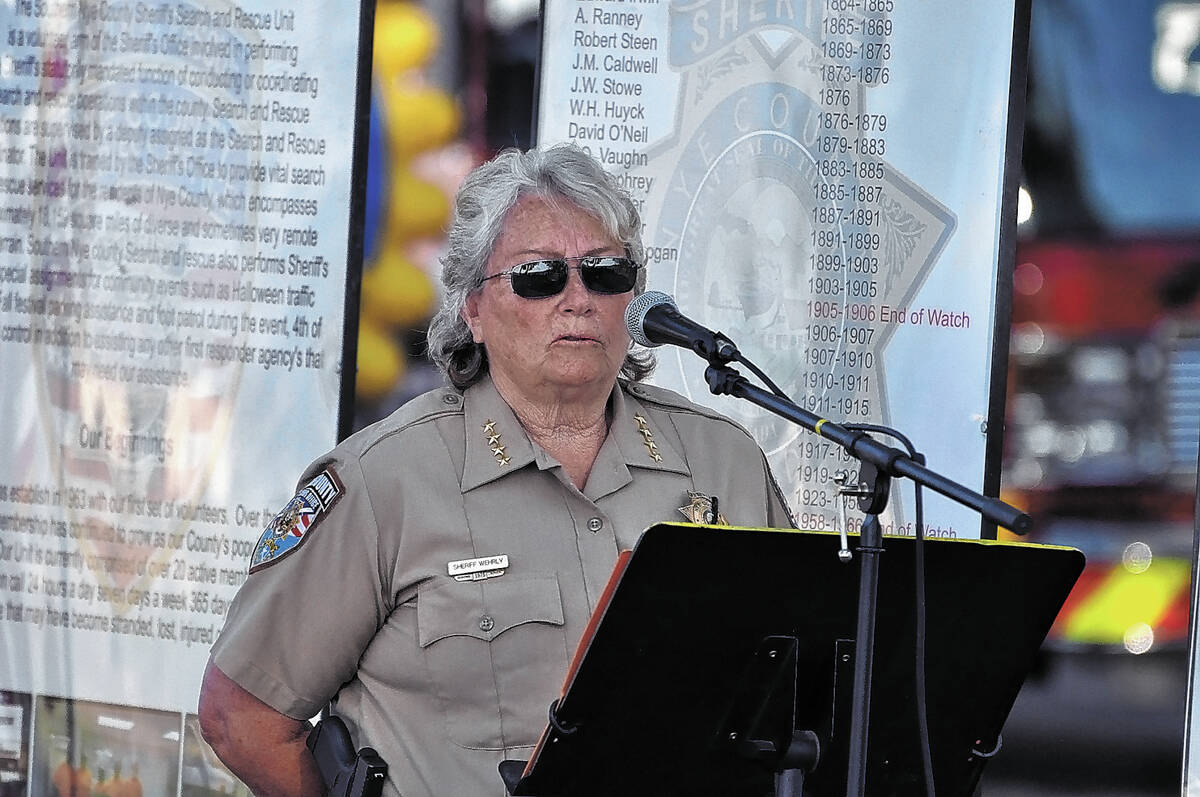 Horace Langford Jr./Pahrump Valley Times file photo Nye County Sheriff Sharon Wehrly as seen at a 9/11 ceremony in 2019. Wehrly is one of 15 candidates under consideration for a vacant justice of the peace seat.

Outgoing Nye County Sheriff Sharon Wehrly is one of 15 candidates being considered for a vacant justice of the peace seat that county commissioners are expected to fill as early as January 2023.

The position replaces judge Kent Jasperson who died in August following a long battle with cancer.

The average pay for a justice court judge in Nevada can range from $61,380 to the mid-six figures. No previous experience is necessary for the position, according to Nye County Commissioner Debra Strickland, who said the appointment will last for two years until Election Day 2024.

“It does not require anything, so just about anyone can put in their name with a letter of interest or a resume. The position does not require a college degree, ” Strickland said. “[Commissioners] make the appointment by voting for the candidate that we want to put in that position.”

The new justice of the peace will be sworn in by the county clerk in January before assuming the bench.

“We’re all looking forward to seeing how this all turns out because we are really ready for some closure on this,” Strickland said.

The seat has been unfilled for more than three month’s since Jasperson’s death.

Interested candidates may submit letters of interest or resumes to become the next Pahrump justice of the peace to the Nye County Clerk’s office, 1520 E. Basin Ave., by Dec. 8, or call 775-751-7040 for more information.

Earlier this month, Sheriff Wehrly lost her bid for re-election to challenger Joe McGill by a double-digit margin. Wehrly will vacate the sheriff’s role in early January when McGill is expected to be sworn in as the county’s top law enforcement officer.

Among the 15 candidates for the position is chair of the Nye County Republican Central Committee William Carns, former U.S. Senate candidate William Hockstedler and District 4 Commissioner Leo Blundo, who lost his Republican primary to Ron Boskovich in June.

Strickland said the judicial appointment will appear on the agenda of the commission’s Dec. 6 board meeting for initial discussion, but it’s unclear when action will be taken to fill the seat.

“It’s my position that I’d like to have the new commissioner seated before we make that determination because District 4 won’t be represented. I don’t think that would be fair because I wouldn’t want to hear that item until after the District 4 commissioner is seated,” Strickland said. “That’s my position on that, but it all depends on what the commissioners have to say on Dec. 6.”